Update Sep 16: ninth place, people couldn't compete against the machine learning gurus who knew what they were doing from the beginning. I am / we are ninth at the end. Also, the winner has 3.805 (although everyone else is below 3.8) so I apparently lose a "below 3.8" $100 bet. Heikki is very lucky, isn't he? ;-)

A minor update Sep 15: I just wanted to experience the fleeting feeling of our team's look from the top of the preliminary leaderboard where we (shortly?) stand on the shoulders of 1,791 giants. 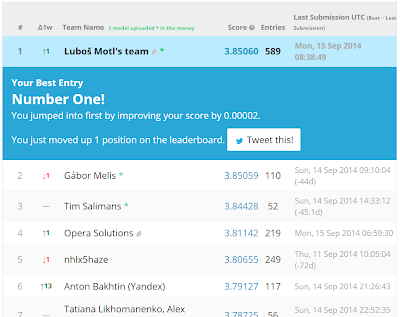 Today, the "public" dataset of 100,000 events will be replaced by a completely disjoint (but statistically equivalent) dataset of 450,000 "private" ATLAS collisions and our team may – but is far from guaranteed – to drop like a stone. And even if it doesn't drop like a stone, there will be huge hassle to get convinced that the code has all the characteristics it should have. I am actually not 100% sure whether I want to remain in the top 3 because I dislike paperwork and lots of "small rules".

Text below was originally posted on September 4th as "Kaggle Higgs: back to K2"

The ATLAS Kaggle Higgs contest ends in less then two weeks, on September 15th or so, and I wanted to regain at least the second place among the 1,600 contestants seen in the leaderboard – because I still believe that it is unlikely for me to win a prize.

After many and many clever ideas and hundreds of attempts, my team returned to the second place where I have already been for one hour in June. 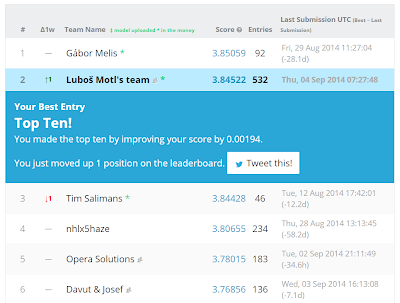 Gábor Melis is ahead of my team by 0.005. I am learning Hungarian in order to revert this gap.


I've tried about a hundred of amusing ideas to improve the recognition of the Higgs signal events. Maybe, after the contest ends, I will post about 10 blog posts with some examples of these ideas and codes.


Today, to regain the preliminary silver place, I was considering the 38,000 testing.csv events that have undefined values of the ATLAS MMC (missing mass calculator) Higgs mass,\[

\] The undefined value of the Higgs mass is a big hint that the collision hasn't really produced a Higgs boson. It doesn't look like a Higgs boson so it probably doesn't quack like one, either. The percentage of the "signal" events among the "undefined MMC events" is small.

So last night, on a trip, I was thinking that maybe the xgboost software does a poor job and classifies too many "undefined MMC collisions" as signal. The number of true signals over there is so tiny that you won't lose much if you just remove all these events from your "list of signal candidates" i.e. if you reclassify all of them as background. And indeed, you do not lose too much score if you do so, just about \[

\] However, if the xgboost had been working poorly and most of the "undefined MMC" events would be false positives, removing them could have improved the score by as much as \(0.2\). It would be cool. Unfortunately, xgboost does a good job in filtering these events.

My improvement of the score that came 20 minutes later is closely related to the considerations above but I can't tell you how the improvement was exactly done. ;-)
Luboš Motl v 10:01 AM
Share