Sam Telfer has noticed and tweeted about a Royal Astronomic Society press release promoting today's publication (in Monthly Notices of RAS: link goes live next Monday) of a paper we should (or could) have discussed since or in March 2014 when it was sent to the arXiv – except that no one has discussed it and the paper has no followups at this moment:


The figures are at the end of the paper, after the captions. Unfortunately, Prof Fraser died in March, two weeks after this paper was sent to the arXiv. This can make the story about the discovery if it is real dramatic; alternatively, you may view it as a compassionate piece of evidence that the discovery isn't real.

Yes, this photograph of five axions was posted on the blog of the science adviser of The Big Bang Theory. It is no bazinga.

This French-English paper takes some data from XMM-Newton, X-ray Multi-Mirror Mission installed on and orbiting with ESA's Arianne 5's rocket. My understanding is that the authors more or less assume that the orientation of this X-ray telescope is "randomly changing" relatively to both the Earth and the Sun (which may be a problematic assumption but they study some details about the changing orientation, too).

With this disclaimer, they look at the amount of X-rays with energies between \(0.2\) and \(10\keV\) and notice that the flux has a rather clear seasonal dependence. The significance of these effects is claimed to be 4, 5, and 11 sigma (!!!), depending on some details. Seasonal signals are potentially clever but possibly tricky, too: recall that DAMA and (later) CoGeNT have "discovered" WIMP dark matter using the seasonal signals, too.


What is changing as a function of the season (date) is mainly the relative orientation of the Sun and the Earth. If you ignore the Sun, the Earth is just a gyroscope that rotates in the same way during the year, far away from stars etc., so seasons shouldn't matter. If you ignore the Earth, the situation should be more or less axially symmetric, although I wouldn't claim it too strongly, so there should also be no seasonal dependence.


What I want say and what is reasonable although not guaranteed is that the seasonal dependence of a signal seen from an orbiting rocket probably needs to depend both on the Sun and the Earth. Their interpretation is that axions are actually coming from the Sun, and they are later processed by the geomagnetic field.

\] or the (or more precisely: die) Bremsstrahlung-like process\[

\] where the electrons and gauge bosons are taken from the mundane thermal havoc within the Sun's core, unless I am wrong. This axion \(a\) is created and some of those fly towards the Earth. And in the part of the geomagnetic field pointing towards the Sun, the axions \(a\) are converted to photons \(\gamma\) via the axion-to-photon conversion or the Primakoff effect (again: this process only works in the external magnetic field). The strength and relevance of the relevant geomagnetic field is season-dependent. 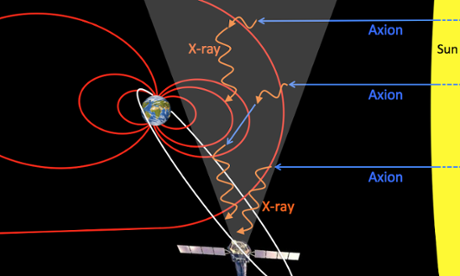 Their preferred picture is that there is the axion \(a\) with masses comparable to a few microelectronvolts and it couples both to electrons and photons. The product of these two coupling constants is said to be \(2.2\times 10^{-22} \GeV^{-1}\) because the authors love to repeat the word "two". Their hypothesis (or interpretation of the signal) probably makes some specific predictions about the spectrum of the X-rays and they should be checked which they have tried but I don't see too many successes of these checks after the first super-quick analysis of the paper.

There are lots of points and arguments and possible loopholes and problems over here that I don't fully understand at this point. You are invited to teach me (and us) or think loudly if you want to think about this bold claim at all.

Clearly, if the signal were real, it would be an extremely important discovery. Dark matter could be made out of these axions. The existence of axions would have far-reaching consequences not just for CP-violation in QCD but also for the scenarios within string theory, thanks to the axiverse and related paradigms.

The first news outlets that posted stories about the paper today were The Guardian, Phys.ORG, EurekAlert, and Fellowship for ET aliens.
Luboš Motl v 5:58 PM
Share