Off-topic, everyday life: I returned from an "extreme reunion" with 1st and 2nd grade classmates whom I haven't seen (in almost all cases) for over 32 years because I moved to another school (moreover, the class I left got slightly expanded afterwards). Pretty cool to meet someone who was arguably one's best friend at age of 7, and so on. How many of you have ever attended such a reunion after a longer break than me? ;-)


Eight years ago, 9,000 astronomers gathered in Prague, the Czech capital. A somewhat important vote took place on the last day when most people had left. Only 400+ folks voted that Pluto would no longer be a planet. 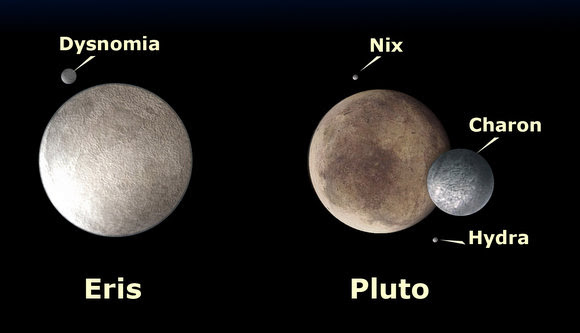 Eris vs Pluto. Eris is a bit larger but otherwise they're almost "twins". It's hard to claim that Pluto has a "virtue" that Eris doesn't.

This 2006 vote is known as the Fourth Defenestration of Prague. The word "defenestration" comes from Latin and it means "throwing something or someone out of the window" in Prague. ;-) The first one took place in 1419 (Hussites threw 7 members of the city council), the second one in 1618 (regents were thrown by some wealthy protestants for sectarian reasons), and the third one took place in March 1948 when communists who took complete power 2 weeks earlier apparently threw out Jan Masaryk, the foreign minister and son of the founder of Czechoslovakia TGM.


I have been trained and hardwired to love Pluto as the ninth planet, much like most of you. It's a matter of terminology and people may distort the meaning of the planet so that the list is whatever we like. Nevertheless, at the end, I would prefer some meaningful scientific basis for such terminology.

* orbiting a star, or a star remnant, and directly (not like a moon of something else)
* massive enough to be rounded due to its gravity
* light enough to avoid fusion
* massive and old enough to have cleaned its vicinity of junk (planetesimals)

It sort of makes sense. Pluto, now a dwarf planet, failed to fulfill the last condition. There's just too much junk on its orbit around the Sun.

Whether one decides that the definition of a planet should be more inclusive or less inclusive is arguably debatable. But what seems independent of these sensible choices is that Pluto simply doesn't make it among the 9 most important bodies orbiting the Sun – whatever criterion you pick as long as it is simple enough.

In particular, Eris, another dwarf planet, is round and 27% heavier than Pluto. It even has its own moon, Dysnomia. Like Pluto, it has a frozen surface with nitrogen ice and methane. Eris' potential "defect" is its too high relative eccentricity 0.437. The orbit is very far from a circular one. You could use it in a new definition of a planet, to eliminate Eris. But that would not be helpful to eliminate Ceres, another dwarf planet, whose orbit between Mars and Jupiter is nearly circular. Just for the completeness, Haumea's orbit is very similar to Pluto's (both the semi-axes and eccentricity) but its mass is 1/3 of Pluto's.

Note that these small objects' mass is estimated once you find some satellites orbiting them. Two satellites are known around Haumea. However, Makemake, the last dwarf planet among the five, has no known satellites which also means that we don't know Makemake's mass. There are complications like that.

Given the annoyingly messy classifications schemes for the pieces of rock in the Solar System etc., I would think that a step towards some "logic" and "rules" is a step in the right direction. We've had some recent exchanges with Lisa Randall about the words "meteoroid" and "bolide" (not to mention "meteor" and "meteorite"). There exist ambiguities in the meaning of these words and I think it is unfortunate. The rocks in the Solar System (and other systems) come in very many sizes but there are just several conditions discriminating these objects truly "qualitatively" and it is unfortunate to divide the rocks into finer groups than what is defensible by these "qualitative" differences. Boundaries that cut through the "bulk" and divide objects according to some "quantitative" properties just look awkward, especially because in the case of the marginal cases, one needs to measure an object accurately to decide what "kind of an object" it is.

But to return to the present, Metro, WaPo, Tech Times, and many colleagues told us that there was an event at Harvard-Smithsonian some two weeks ago. A vote over there made it clear that the folks in that institution – and participants of conferences that would be organized by someone at Harvard – would endorse the revival of Pluto as a planet.

The articles don't quite explain whether they want to change the definition of a planet, or define planets just by the full list – which may be hard, given the fact that lots of experimenters love to study exoplanets these days. It's clear that the "clean orbit" condition would have to be suspended in some way for Pluto to "come back" but we were not told whether they actually want the tons of larger or similar objects to make it to the list of planets as well, or whether they want to add some special new conditions that would reduce this competition.

I would like to know whether this opposition to the "demotion of Pluto" exists among the young people who have never been taught that Pluto has to be a planet. If people like to defend Pluto as a planet just because it's a habit they have been programmed to worship, perhaps because that keeps some of their childhood alive, I think it may be a good idea to jettison that excess baggage in order to make progress.