Off-topic, music: the Macbook of Acapella Science, Tim Blais, the author of "Bohemian Gravity", got stolen along with non-backed-up music data. He is under financial pressure and was asking people for help. Well, within 2 days, he has already collected 3 times his goal to buy a new laptop.


Just in the last week, three self-confident reports on progress in fusion were published – and be sure that I don't count the new "independent test" of Rossi's cold fusion miracle. 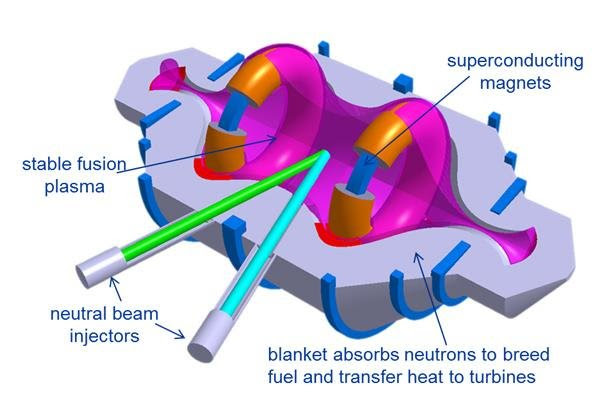 What I do count is the dynomak, the Z-machine improvement, and... a today's intriguing announcement by a major aerospace and defense company:


We're told that they bet that their compact nuclear fusion reactor (CFR) – see the diagram above – will power the mankind within ten years.


The company is no newcomer to the fusion research. Their Skunk Works division has been doing research on fusion for 60 years. They believe that the key to progress is to design devices that are much smaller than in the ITER-like projects. And several patents are pending that may reduce the size of the reactor by 90%. Their approach falls to achieve this goal falls to the class of high beta reactors.


While details on the precise newest source of the excitement are not really available, the Skunk Works folks inform the public that they have combined useful abilities of several major approaches to the magnetic confinement of the plasma.

The figure "ten years" above sounds really cool. But the press release boasts some preliminary deadlines that are even more exciting. A prototype will be ready in 5 years – but they will already test something that looks like the prototype CFT within one year, while searching for partners who can help them.

Because the company's annual revenue was $45 billion and the gadget is supposed to be small, I hope – and think – that the shortage of money is probably not going to be a big problem.

Here is a 4-minute introductory video to their CFR they posted a few hours ago. Researchers tell you that the CFR gadget will actually power airplanes, too: the machine should be as big as a truck. Also, your favorite coal power plants will be saved – just a small piece in the center will be replaced by their device.

The guy called Thomas McGuire (whose PhD from MIT was about a NASA-led research of energy sources to get to Mars) thinks that once he completes the construction of the fusion reactor and the world will switch to it, he will still have to find a job, e.g. to clean windows in the local McDonald's.
Luboš Motl v 8:09 PM
Share