You are often being told that polar bears love the chilling weather and thick ice but POLARBEAR is a CMB experiment located in a desert in Chile (although the altitude is over 5 kilometers). Californian cosmologists from Berkeley and San Diego are the main members of the collaboration. 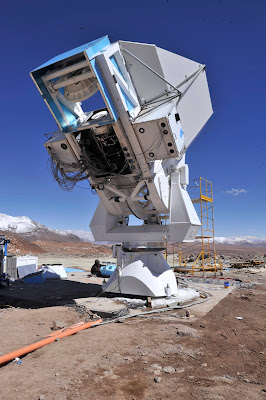 A few hours ago, it announced a "breakthrough" that was reported in the media:


A problem with the hype is that the paper producing the story is nothing else than the March 2014 preprint that many of us have seen a long time ago. But let me discuss this as if the story were really new because no blog post has been dedicated specifically to POLARBEAR yet.

They describe themselves as the most accurate ones, and so on.


Just to be sure, yes, it is a team of 70 experimenters that is potentially competing with BICEP2 and Planck. But if you expect that they already have their own verdict on inflation, you will be disappointed.


They have only focused on the spherical harmonics with\[

In the recent 2 years, POLARBEAR has focused on the very fine angular scales. I don't quite understand why their already collected data don't immediately contain the information about the inflation-related scales \(\ell\sim 90\).

We're also promised that detailed observations they will publish in the future will be sufficient to measure the neutrino masses out of the cosmological data which would be cool but it doesn't seem to me that this paper is close to this particular goal.

Aside from the Astrophysical Journal paper, two more papers by the collaboration were accepted to PRL. They could be really new but we will have to wait.
Luboš Motl v 8:17 AM
Share