The greenest neighborhood of Pilsen where I live, Doubravka (Pilsen 4, the Eastern neighborhood; the name is a "little" variation of "Doubrava", an archaic Czech word for an oak forest), would also be viewed as the most peaceful one, despite an occassional acid attack. However, that image may have changed in this month.

While we are nowhere close to Donetsk, Ottawa, or Marysville, the inhabitants and especially the local police have had some fun with explosives here in the recent 10 days.


On October 21st, a man brought a rocket to a private shop selling guns for hunting etc. The shop operates in a private house about 1.3 km from my home. The man packed the rocket in a towel and escaped. Police decided to evacuate 500 people from the nearby streets.


Today in the morning, the panic moved even closer to my home. An old woman found a grenade, a Soviet defense F-1 grenade that is ready to be used, near a staircase adjacent to the "Centrum Doubravka" mall. 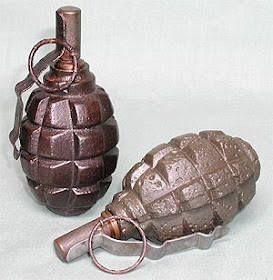 When I was 10-14 years old, I and my classmates would go through "Centrum" pretty much every day. We would be buying e.g. a large ice cream for Kčs 0.70 after we would say "please one little" in English LOL (the price for a large ice cream would be Kčs 1.40). Of course, the building became even more important for me now. For example, we would play floorball in "Centrum" yesterday.

"Centrum" is a good example of what capitalism is capable of doing with a seemingly hopeless socialist architecture. The picture above this paragraph shows "Centrum" on a picture from the 1980s. The photograph is in black-and-white but it is true that everything was grey, uniform, and dull. A recent upgrade of the center made it colorful, diverse, and user-friendly. A glass roof was added, along with the extra "small building inside the building" and a pedestrian bridge with dinosaurs. You can actually hear scary dinosaur sounds over there all the time.

Today, my home was just 100 meters from the forbidden zone – that was protected by cops for a few hours – but they say that only 100 people were evacuated.

If an angry TRF reader is bringing us all these explosives, I urge her or him to stop this futile activity! ;-)
Luboš Motl v 1:35 PM
Share