Separate elections in Ukraine speed up the dissolution of the country

The bulk of Ukraine held parliamentary elections on Sunday.

On Wednesday, we still don't know what the final results are. But we're very close and it seems that six parties will surpass the 5% threshold get into the Parliament:
First, let me mention that the results differ from the pre-election estimates in many respects.


Prime Minister Yatsenyuk – or Yats, as we call this servant in the West – was predicted to get much less but he actually won the elections, having beaten the Poroshenko Bloc. I think that many Ukrainians love the tension with the the pro-Russia folks in the East. Poroshenko is considered to be a "politician of the peace"; Yatsenyuk's party is a "party of the war". They got about the same number of votes. 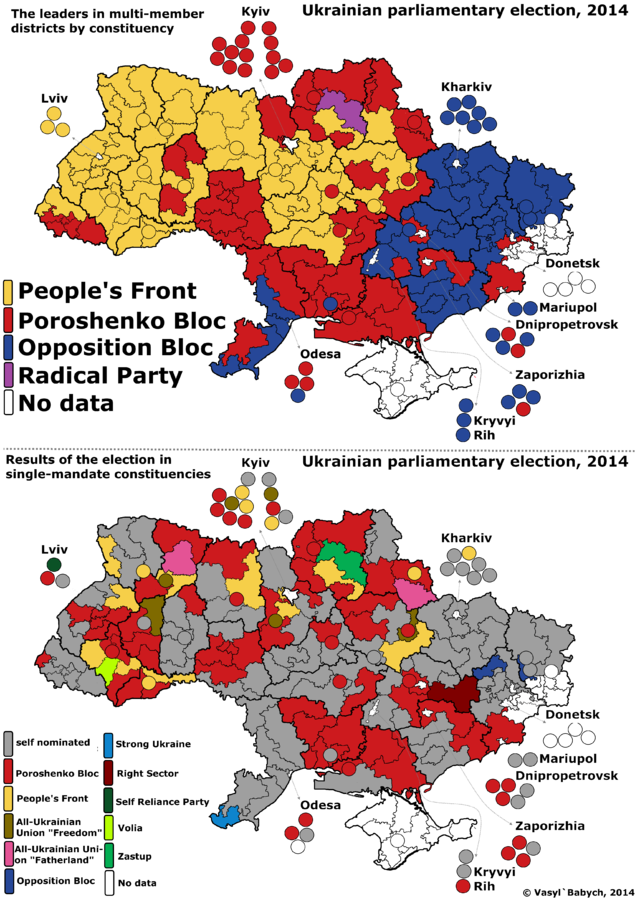 The map clearly shows that the Poroshenko Bloc (red) is more moderate, playing the role of a buffer zone between the districts that voted mostly for Yatsenyuk's People Front (yellow) and those for the Russian-more-friendly Opposition bloc (blue).

Note that the Poroshenko Bloc incorporated Klitschko's UDAR folks; those may be viewed as the only "relatively peaceful" part of the Maidan movement.


The "Self-Reliance" or "Self-Help" party got what was expected. It is more or less neutral when it comes to the civil war.

The Opposition Bloc of Yuriy Boiko unifies many politicians of the Party of Regions – the party that was removed from the power by the coup – who were not expelled from the country or murdered. The official estimates were suggesting that it would score just about 5 percent (that was clearly a matter of propaganda); the bloc got very close to 10 percent. Still, it's a vastly worse result than what the Party of Regions got two years ago – even if we only count the territories where the 2014 elections took place.

This may be a result of the terror against the Party of Regions; it may be a sign of the totally unstable mood of the Ukrainian voters, too. By the way, Vadim Rabinovich, an oligarch and possibly the most influential Jew in Ukraine, was elected to the Parliament on the Opposition Bloc ballot. Powerful Jews may be found on the pro-coup side, too.

Lyashko's Radical Party got 7.5% or so (this guy is a really cheap populist clown who is fighting with others in the Parliament and on the street, is kidnapping people, and may have murdered some of them, too – and he is doing all this theater to "improve" his image). Tymoshenko's Fatherland about 5.5% – she was around 30% two years ago; a sign that the moods are changing rapidly, indeed. Tymoshenko turned out to be a fanatical nutcase and the Ukrainians may be able to see this fact, too.

This is the list of the six top parties. Clearly, the pro-coup forces won. However, the turnout was just 51% which is extremely low for a country where politics is such a hot topic – and I think that every country undergoing a civil war fits this description. The turnout was 57% two years ago. Most of the supporters of the Party of Regions may have simply surrendered and avoided the poll stations.

The seventh party, the fascist Svoboda (Freedom... ironic) party, has seemed to be above 5% yesterday but it is likely to stay below 5% today – it will stay outside the Parliament. Also, the Communist Party and the Right Sector are outside the Parliament with 2-3% each, and so are dozens of other parties. I would actually enjoy these aspects of the results if I were an Ukrainian.

What do the elections mean?

With these results, if we treat them as legitimate elections, there's almost no doubt that the forces trying to change Ukraine from a province in Greater Russia to a future EU member state (which is a wishful thinking, not something that you may reliably plan) have earned lots of political capital to try to realize their vision.

However, there is one more result that is arguably more important. The elections that only took place at the territory controlled neither by Russia nor by Novorussia have escalated the political divergence of these parts of the country once known as Ukraine.

Note that even if elections take place on the whole territory, their radically different results in parts of the territory may lead to the breakup of the country. That was clearly the case of Czechoslovakia after the 1992 elections. There were almost no important "federal" parties that would be powerful both in Czechia and in Slovakia. The self-evidently different results in the two parts of Czechoslovakia have dramatically accelerated the dissolution process.

In this case, the elections didn't even take place in Novorussia. In fact, Novorrusia is going to vote this Sunday, one week after the rest of the old Ukraine. And everyone seems to be fine with this fact – the fact that the two elections have nothing to do with one another.

Some naive people in the West could have expected the Kremlin to say: We don't recognize the Kiev-organized elections! And so on. But this is exactly one of the greatest examples of the almost complete absence of political intelligence among the would-be "mainstream" political pundits in the West. On the contrary, the Kremlin immediately said that it does recognize the elections three days ago; and it is ready to recognize the other elections in four days, too.

This may look like a surprise to all the stupid people who buy all the cr@p about Putin's efforts to undermine everything that the "nice pro-Western" folks are doing. In fact, the Kremlin knows very well that the anti-Russian moods in the Western or Northern parts of Ukraine are strong these days. The Kremlin never tries to deny the reality on the ground.

The political divergence of the regions controlled by the Novorussian authorities away from the rest of Ukraine will deepen and become more irreversible.

I think that no one who matters in Russia wants to "conquer" all of Ukraine or something like that, at least not in a very near future. It would be way too much hassle. The territories of Ukraine where the support of the complete or partial unification with Russia is overwhelmingly strong are rather special. And if we imagine that the realistic goal is to merge these territories with Russia in the near future, the twin elections are making a huge leap towards this goal. That's why it makes sense for the Kremlin to endorse the twin elections. And that's why the Kremlin is playing chess while those who had expected the Kremlin to undermine the Kiev-organized polls are playing checkers.

It seems sensible to me that Kiev should simply surrender the territories currently held by Novorussia and negotiate peace along these lines. The rest of Ukraine would be much more uniform and probably "robustly" pro-Western in its dreams. And the territories lost in this way would be really tiny in comparison with the percentage that was plausible just a year ago. Recall that just in 2012, the pro-Russian parties managed to win a majority of the votes. Ukraine could have very well lost 1/2 of its territory or more. Instead, we are only seeing Crimea and 2/3 of the Donetsk and Luhansk regions that are either reincorporated into Russia or held by the pro-Russian authorities.

If the Kremlin were in charge of the Kiev government, they would surely have lots of pragmatism to realize such things, negotiate a change of the borders and the status of the territories that only legalize the actual conditions on the ground, and restore peace on the new map. However, with Yatsenyuk in charge, there will probably be lots of hatred combined with the denial of reality by Kiev. A cold winter could remind Ukraine of its dependence on Russia and cool down some of the emotions but I doubt that the approach of the new Kiev government will be describable as "pragmatic" or "realist" in the strong sense.
Luboš Motl v 7:56 AM
Share