Particle colliders at increasing energies are the "most universal" and the "most prejudice-free" way to search for new physics. New, heavier hypothetical particles of any kind (particles associated with the laws of physics at ever shorter distances) are increasingly visible, along with the effects of these or even heavier particles (all sorts of non-renormalizable operators become more visible, too) whenever the experiments are able to upgrade the energy of the colliding particles. 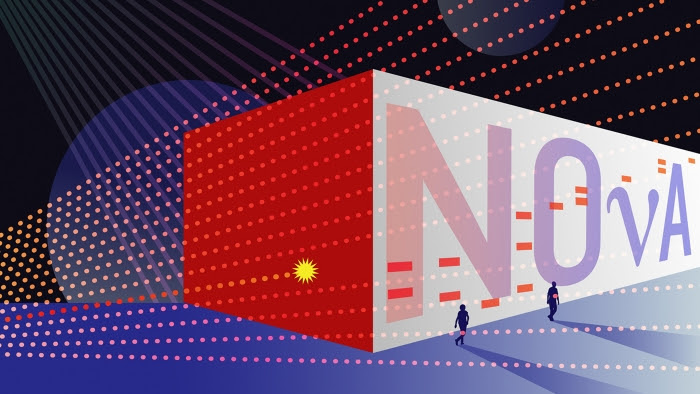 Physicists aren't putting all their eggs into one basket. Neutrino experiments are an important example of experiments that "ignore the high-energy frontier" described in the previous paragraph. They may be a bit cheaper but they're also looking for a "much more special" type of new physics – so one may argue that the probability of finding something new is lower. There's some sense in which the "bulk" of the U.S. experimental particle physics has been downgraded to neutrino physics.

In the recent week, The Symmetry Magazine brought us two stories about neutrino experiments.


First, the construction of NOvA is actually complete. What is NOvA? Well, NOvA stands for NuMI Off-Axis \(\nu_e\) Appearance. It didn't help you, did it?

OK, it didn't because I must explain what NuMI is. It stands for NeUtrinos at the Main Injector. That's better. In practice, NOvA is a better successor of MINOS, an experiment that waits in Minnesota for some neutrinos shot from the Fermilab in Illinois (a place that is 500 miles away). By having spelled it as NOvA, I have saved a minute even though be sure that I could write it as \({\rm NO}\nu{\rm A}\), too. ;-)


The experiment should measure the PMNS neutrino mass matrix more accurately than ever before. My understanding is that NOvA is already running. It has actually detected its first neutrinos in February 2014, 8 months before the construction was completed! ;-)


Now, the second story is that PRL has published another paper by the Daya Bay experimental team (Daya Bay is just tens of miles Northeast from the currently troubled Hong Kong):


Search for a Light Sterile Neutrino at Daya Bay (PRL)


These folks – who recently proved that the angle mixing the first and third generation neutrinos is nonzero and rather large, as approximately predicted by some string theorists (I mean those in love with the segregated non-gravitational F-theory phenomenology) – were looking for a new species of neutrinos, the sterile neutrinos that are nevertheless represented as the "fourth generation neutrinos". This is the money graph.

These new hypothetical particles (not really needed for anything, but still plausible) can only be seen if they oscillate from-and-to the three known generations of neutrinos. The greater the "mixing angle" is, more precisely, the larger \(\sin^2 2\theta_{14}\) is, the easier it is to convert the new hypothetical neutrinos to the known one and vice versa – a process necessary for seeing the new particles.

Because the experiment hasn't seen anything, it may say that if the new neutrinos exist at all, the squared sine of the relevant (doubled) mixing angle is small enough and obeys \[

\] Well, this rather strong bound is only reached for a particular "medium" mass of the new hypothetical particle, more precisely for the difference of squared masses\[

Apologies for these technicalities. It seems very likely that the sterile neutrinos will not be discovered in the next 100 years. But we may be surprised. There exist models in which most of dark matter is composed of sterile neutrinos. There's nothing wrong about these models. But I would also add that there's nothing great about these models, either. Even if we found out that the dark matter is composed of sterile neutrinos, it would be a good isolated insight to know but we wouldn't learn anything deep, at least not immediately after the discovery of the sterile neutrinos. I am sure it's fair to say that the discovery of the neutralino LSP (and therefore a sign of supersymmetry) would be far more profound.

All these considerations and enthusiastic or restricted emotions should probably be known to anyone and everyone who tries to compare the importance and value of these neutrino experiments with the LHC and its successors, for example. The neutrino experiments are nice but there exist very good reasons why a smaller amount of money is going to them than to the LHC and its successors, too.
Luboš Motl v 5:29 PM
Share