Almost every religion likes to accumulate various superstitions, arbitrary meaningless answers to pretty much everything. The climate alarmist religion is doing it, too. One of the silliest superstitions that have been gradually incorporated into the religion of climate hysteria is the "2 °C climate target" – the idea that we are obliged to avoid the warming of the Earth by more than 2 °C above "pre-industrial levels" because otherwise the Mother Climate would show us Her anger.

As far as I remember, I have never dedicated a blog post to this staggeringly stupid meme – I think that it's only repeated by completely science-illiterate politicians (who love the idea that they will be responsible for the corresponding planning) and other laymen, not by people with some education in natural sciences. Well, as we were just shown, this amazing idiocy is actually parroted by some of the people who like to be called (natural) scientists, too.


Kennel and Victor explain that the other climate alarmists should no longer mock themselves with this particular superstition. Many of their arguments are valid but the article is still written from the viewpoint of climate alarmists – the assumption is that there must still be some global climate problem and some other way to quantify this problem. So of course that I wouldn't endorse this article as a whole.


It turns out that even this modest proposal, to ditch a particular, excessively silly superstition, was found to be too much by someone who wants to be called a climate scientist, namely Stefan Rahmstorf:


Limiting global warming to 2 °C – why Victor and Kennel are wrong (RealClimate.ORG)


Let us look at some of the considerations – and some others, too.


The 2 °C climate target is preposterous for many reasons, including:
Rahmstorf neglects most of these points – either because he is completely incompetent or because he intentionally acts as a demagogue. So for example, he doesn't discuss the problem that we just don't know what the "pre-industrial temperature" was. But he does mention some of the problems and everything he writes is just seriously wrong. 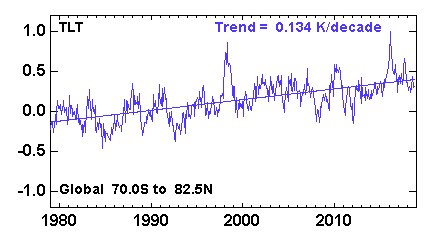 For example, he says that the short-term oscillations don't matter because they are small. Just look at this RSS AMSU graph of the global mean temperature and imagine that the tilted line – or any other line – defines the declared "threshold". Similar results hold for slightly tilted as well as constant curves. You see that the actual temperatures intersect the "threshold" many times. Since the late 1990s, you may define a flat "threshold" such that we would switch from "we are in trouble" to "we are not in trouble yet" and back at least 10 times. The uncertainty about the "moment" when the threshold is "fundamentally surpassed" is at least 20 years. The reason why the uncertainty is so high is nothing else than the fact that there is no significicant trend underlying the observed noise. It's just weather, Gentlemen.

And it's not just one tenth of a degree as Rahmstorf tries so suggest. Open the main RSS AMSU text file and look in the first temperature-related column. It's the global temperature anomaly. Select two months, e.g. April 1998 and May 2008. The anomalies were +0.857 °C and –0.134 °C, respectively.

We don't know what the warming was since the "pre-industrial levels" through April 1998 or May 2008, as I mentioned, and these anomalies are expressed relatively to a recent average, not the pre-industrial levels. But we more or less know what's the difference between these two "overall temperature increases from pre-industrial levels" up to April 1998 and up to May 2008. They differ almost exactly by 1 °C. (If we considered the annual temperature anomalies instead of the monthly ones, we could still observe differences in nearby annual figures comparable to 0.5 °C.)

So if you want to claim that the global mean temperature and its 2 °C target measures something important, you must agree with a statement like "one-half of the global climatic catastrophe was undone between April 1998 and May 2008". This statement and similar statements are obviously preposterous – there was nothing "substantially better" or "substantially worse" about May 2008 relatively to April 1998. Virtually all of us were alive and we remember that there is nothing climatic to remember, is there?

Rahmstorf's only extra scientific comment is that the mythical 2 °C threshold must surely be a tipping point at which the hell breaks lose. For example, we learn that the Greenland ice starts melting irreversibly. That's very nice but melting is never irreversible. The reversed process is known as freezing. (The geometry of melting and freezing of typical large ice sheets aren't exact mirror images of each other but the microscopic processes more or less are.) Moreover, huge chunks of the world's ice have melted and refrozen billions of times since the Earth was formed. To see that the case is even worse, it is totally obvious that there can't be any "one size fits all" temperature that could kickstart some havoc everywhere in Greenland. The annual mean temperatures at different parts of Greenland differ by many, many Celsius degrees, so if they see some "critical points" at all, they see them at totally different points of the thermometer scale. In other words, all processes affecting Greenland as a whole are really continuous. Some particular events may look abrupt or discontinuous but the probability of them or the potential for them evolves continuously.

Rahmstorf's other arguments almost sound as if he were joking. He says that it's not true that the 2 °C target was uncritically adopted, as the writers in Nature notice, because the target was actually backed by Danish prime minister Anders Fogh Rasmussen during one of his speeches! Cute. Thankfully, Rasmussen is no longer a prime minister and won't be a boss of NATO, either. But even if he were an important politician, I can't imagine how a scientist could seriously argue that a target becomes scientifically defensible if a politician mentions it in the speech.

To accumulate these apparent jokes, Rahmstorf also says that the Cambridge University Press has published a book or booklet where the 2 °C target appears somewhere on Page 187. Cute, quite an "argument". Some people in the UNFCCC have paid lip service to this insanity, too. OK, I won't honor these particular "arguments" with a reaction going beyond a sound of derision.

There is a funny exchange between the writers in Nature and Rahmstorf when it comes to the future released heat that got hidden in the ocean. The Nature writers wrote:


Because energy stored in the deep oceans will be released over decades or centuries, ocean heat content is a good proxy for the long-term risk to future generations and planetary-scale ecology.


While the evolution of the ocean-based temperatures could be less fluctuating than the surface temperatures, the particular extra arguments above in favor of the "ocean standards" are of course mostly silly. The ocean's heat capacity is much larger than the heat capacity of the atmosphere, so if some heat makes it to the "bulk of the ocean", it effectively gets hugely diluted. The second law of thermodynamics allows heat to get diluted, but it doesn't allow the heat to spontaneously concentrate itself again!

What it means is that if the extra heat from a one-degree-like warming of the atmosphere makes it to the ocean, the bulk of the ocean gets warmer by something comparable to 0.01 °C, and the only thing that this warmer ocean may do to the atmosphere is to warm it (more precisely, to increase the expected equilibrium temperature) by the same 0.01 °C sometimes in the very far future, thousands of years from now. Physics just doesn't allow the energy to be transformed from "diluted heat" to some more concentrated forms of energy.

Rahmstorf knows this piece of classical physics so he corrects them. There is no thermal threat waiting in the deep ocean.

But what he's missing is that the writers in Nature talk about this non-existent threat because they've been misled by lots of intense propaganda about dangers related to the climate change. They were able to figure out that no noteworthy threat may be linked to the global mean surface temperature – the expertise of an astrophysicist and even the common sense of a political scientist are enough for that. However, the broader point that the writers were led to misunderstand is that there is no global climate threat at all, whether it is linked to the surface temperatures, ocean temperatures, or anything else. Because they've been "programmed" to believe that there has to be a threat and they have figured out that it's not tied to the mean surface temperature, they conjectured that the "benchmark" must be elsewhere, e.g. in the ocean.

For this reason, Kennel's and Victor's article inevitably contains such an elementary physics blunder. If they had not been misled about any such basic physics misconception, they would be perfectly educated – i.e. perfect climate skeptics. Their article would correctly state that the climate hysteria is a 100% idiocy and such an article wouldn't be allowed to appear in Nature because most of the people who decide about the publication of articles are at least 40% idiots.

Seriously, all climate alarmists are deluded about rather important points but we should still distinguish those who are more deluded than others. I am ready to believe that Rahmstorf knows much of classical physics more reliably than Kennel and Victor. But if he isn't able to see what's wrong (everything!) with a "global mean temperature target", he belongs among those who are more deluded than other climate alarmists.
Luboš Motl v 7:32 AM
Share