Two days ago, the Daily Mail (plus colleagues) has excited many readers by the following esoteric article:


Mystery of the 'spooky' pattern in the universe: Scientists find that supermassive black holes are ALIGNED


The Very Large Telescope has found some weird pattern in the locations of quasars and the rotation of the central supermassive black holes. And these patterns are far-reaching – seem to correlate objects that are billions of light years away from each other, i.e. distances comparable to the size of the visible Universe. 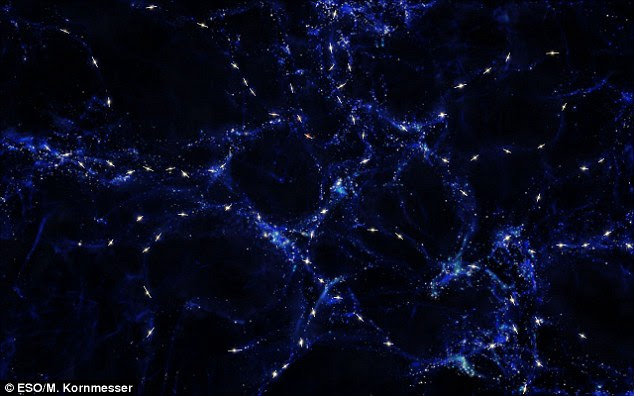 This is just an artist's depiction of an alignment.

The probability that such patterns emerge by chance – according to the current models with their probability distributions defining chance – is said to be 1 percent.


A Belgian team has used the VLT to look at 93 quasars as they existed almost 10 billion years ago. The quasars seem to belong to lines – which shouldn't be the case according to the current theories of structure formation, they say. And the direction of the large black holes' angular momenta seem to coincide despite their cosmological distances.


It's said to be "very unlikely" (1%) that such patterns emerge by chance. I find this claim a bit controversial and requiring verification. After all, the usual pictures of the "webs" associated with the structure formation don't look too different. Our state-of-the-art models of structure formation surely imply non-uniformities of the distribution of galaxies and some filaments and voids in the structure. The apparent fact that the researchers seem to be silent – and maybe even ignorant – about this elementary insight seems to reduce their credibility in my eyes.

The research was described in a September 2014 preprint


which was accepted for publication in Astronomy and Astrophysics (therefore the media hype now) even though it has 0 citations at this moment. For those numerous reasons, I don't really think that they have discovered something really new. But if they have and there's something important than I am missing, you could think that the explanation has something to do with some mysterious long-distance entanglement, breakup of cosmic strings, or e.g. a nontrivial topology of the Universe.

And just the nearly infinitesimal probability that some of these things could be right was enough for me to write this blog post.

The paper – even its abstract – is more accurate than the media echoes and says that the quasar polarization vectors seem to be surprisingly orthogonal to the surrounding large-scale structure. And if that's not the case and the directions are (nearly) parallel, the emission line width seems to be significantly smaller than for the prevailing orthogonal ones. These two comments may possibly imply that the quasar spins are parallel to the host large-scale structures. In other words, the quasars seem to be spinning around the axes that are drawn in the sky with these quasar dots.