The Japan Realtime blog at the Wall Street Journal informs us about some bitterness surrounding Dr Shuji Nakamura of UC Santa Barbara who won the physics Nobel prize one month ago. 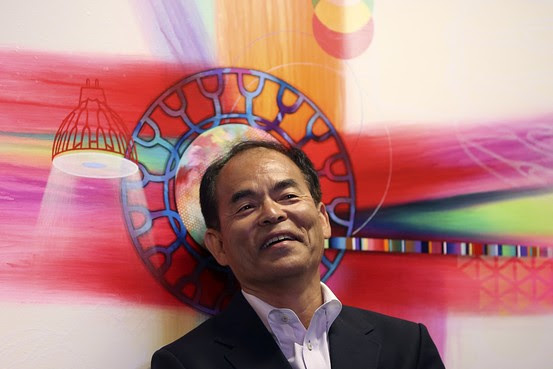 You should understand that I am among those who consider the invention of blue LEDs to be primarily an achievement of engineering, not physics, and if I had to give a Nobel prize for that, I would probably pick the Nobel prize for chemistry. I realize that there are no "chemical reactions" involved in the operation of blue LEDs. But the kind of "combination of the right elements" to obtain the right "atomic and molecular properties" is fully analogous to what the chemists are doing.

But this "applied" character is something we're used to from many previous science Nobel prizes. After all, Alfred Nobel might have very well considered his dynamite to be a discovery in physics, too, so I am not going to pretend that I am surprised. This kind of inventions is what he would probably want to be rewarded. I would certainly not describe the choice as something that "discredits" the award (in the same sense in which way too many recent Nobel Peace Prize helped to discredit the already pretty unimpressive honor: no, while different Nobel prizes may have been created equal, they are no longer equal today). The invention may be described as a great result of applied physics, too.


If you think that everyone is universally beloved by his former employers etc. after he wins a Nobel prize in physics, you would be wrong.

The discovery took place in 1994, i.e. twenty years ago, and as the WSJ blog reminds us, the invention occurred in the Nichia Corporation. It is a Japanese producer of LEDs whose annual revenue reaches something like $2 billion dollars.


Nakamura left Nichia 15 years ago, about 5 years after his invention. For years, Nakamura and Nichia would be battling in the courts because he wanted to be compensated for the invention.

I find this very fact bizarre. I would assume that a research department of a company that has the potential to produce multi-million- or multi-billion-dollar inventions has some very rigorous contracts that exactly specify who gets how much money or royalties when an important invention is made. But apparently, it wasn't so. (Bosses supervising similar promising research centers should surely hire some lawyers and improve the precision of their contracts!)

It is totally conceivable that the contract would say that the researcher gets nothing beyond his basic income. Such an arrangement would probably fail to encourage the researchers to invent great things. A better contract could give him much more than that. (As far as I can say, the Nobel prize rules overrule everything else and the prize should go to the real inventor/discoverer if she or more likely he can be identified. So any paragraph in an employee treaty saying that the employer gets the Nobel prize would probably be invalid.)

At any rate, when Nakamura originally discovered the blue LEDs, he got a bonus of $176 from the company. That's really cute. He could have bought a few LEDs for himself, or perhaps hire someone to clean his restroom. After years of battles, Nakamura and Nichia settled – he was paid about $7.4 million in 2005 and the wars ended.

Was it too much? Too little? I don't know. It looks like a substantial amount of money (although I would have to know how much the company has actually earned from the blue LEDs for my opinion to be more justified and quantifiable). For this reason, maybe I am not too surprised that when Dr Nakamura of UCSB wrote a letter to Nichia with the offer to meet them, they responded with "don't waste your time, we haven't had anything to do with you for 15 years". Nakamura was "disappointed" by this reply.

It's perhaps sad but it also shows that research isn't everything. Nichia is probably not imagining that similar people are worth an infinite amount of yens.

I have often been thinking about this issue – how important the mankind's "know-how" is relatively to the hard work that people had to do in the past. Although I am naturally coming from the "idealist" culture that tends to say that "the great advances are almost everything", I actually have some doubts about the conclusion.

Imagine that we have all the know-how, physics knowledge, projects, schemes, and so on, but all the "physical products" that people have ever made are gone. In particular, imagine that all the buildings, bridges, and similar constructions in the world disappear. How much time would be needed to get approximately to the point where we are today?

You would still need a very long time – decades and perhaps centuries – to build everything that needs to be built. We just don't know how to speed up the construction "dramatically". Meanwhile, you would have to produce enough food for the construction workers to have enough energy, and so on.

To summarize, it is clear that the existing inventions and knowledge of science and technology that we possess today are extremely valuable and strikingly distinguish our civilization from the civilization of the 15th century or the Ancient Mesopotamia (which had to be great, but still deficient relatively to the present in various ways).

On the other hand, one shouldn't exaggerate the importance of the growth and of the inventions and discoveries from the most recent years. To express my guess a bit more quantitatively, I would say that the the total value of the inventions and discoveries of the recent 50-100 years is approximately equal to all the "hard straightforward work" that the people have done as of today.

Make no doubts about it: research is important and its results in the last 50 years may be as valuable as the value of the "hard straightforward work" in the same 50 years. If true, that would be a great result for research that only devours a few percent of the world's GDP. On the other hand, I wouldn't rate the results of research higher than that – as giving us much more than the "hard straightforward work" does.

And discoveries like the blue LEDs are nice but to some extent, they should be counted as "business as usual" in similar Nichia-like (and academic) research centers, not as "unpredictable, exceptional, and unprecedented revolutions".