Six years ago, Barack Obama was elected for the first time and, slightly surprisingly for me, he was also reelected two years ago. But six or eight years is a rather long time for a fad. So despite the very good condition of the current U.S. economy and other positive signs, the Democrats have decided that Barack Obama has become a liability and they tried to hide him in the basement.

I think it has become too self-evident that most Americans disagree with Obama on key domestic topics such as immigration and healthcare. But what do I know? Maybe Ebola-ISIS-Ukraine have played a role, too. 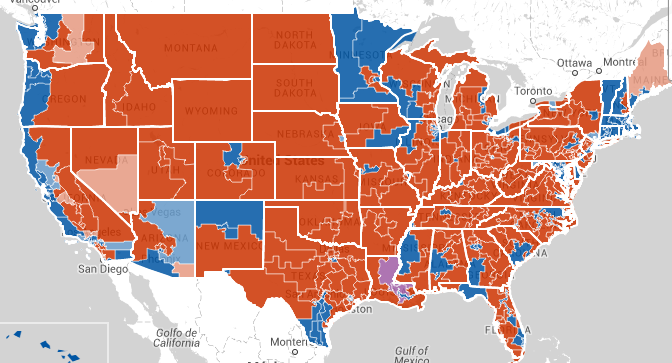 The map of 2014 House elections: Alaska is dark red and Hawaii is dark blue. Click for more BBC maps.

The hiding strategy wasn't too helpful, anyway: the gains of the Republicans are way too obvious. A pig claims that there was a huge gender gap – that Democrats would actually slightly win among women but their deficit among the men was just huge. This gender polarization of politics seems highly unfortunate to me (because the men-vs-women contest is not useful for selecting good ideas: their percentages will always be close to 50%) and I think it's the Democratic Party's policies that should be blamed for this asymmetry.


The GOP managed to win both chambers of the Parliament again – just to be sure, Obama isn't the first president who got beated six years after his first election. However, the majorities of the GOP have set a new post-war record (the map was similar in 1946). One could say that it seems that the years of Obama's government have had a similar impact on the electorate as the Second World War.

Most of the elected Republicans are "establishment" Republicans but the Tea Party voters were probably essential for their success.


One could discuss lots of individual Senate, House, and governor races. Massachusetts will have a Republican governor, to mention an example I cared about. The GOP succeeded in sending some interesting characters to politics. Folks in South Carolina are often presented as bigots and racists by the leftists. Well, they have elected an Indian female governor and a black senator. So much for the libels. Just to be sure, Democrats have elected blacks, too, e.g. Roger Freeman in Washington State. The only disadvantage of this politician is that he has died a week ago.

Well-known climate realist James Inhofe of Oklahoma was reelected to Senate with 68% of votes. He will hopefully be elected as the boss of the environmental committee of the Senate and insane plans of the climate alarmists will hopefully be dead in the U.S. politics at least for two years. Mitch McConnell of GOP should become the majority leader in the Senate.

Congratulations to those U.S. readers who think that the Tuesday elections were a success; condolences (and my advise for them to think in a fresher way) to those who think otherwise.
Luboš Motl v 9:38 AM
Share