Is our galactic black hole a neutrino factory?

When I was giving a black hole talk two days ago, I would describe Sagittarius A*, a black hole in the center of the Milky Way, our galaxy, as our "most certain" example of an astrophysical black hole that is actually observed in the telescopes. Its mass is 4 million solar masses – the object is not a negligible dwarf.

Accidentally, a term paper and presentation I would do at Rutgers more than 15 years ago was about Sgr A*. Of course, I had no doubt it was a black hole at that time. 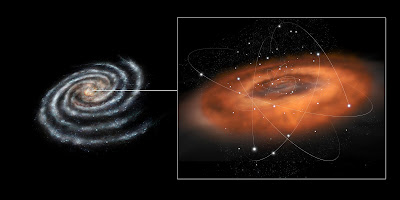 Today, science writers affiliated with all the usual suspects (e.g. RT) would run the story that Sgr A* is a high-energy neutrino factory.

Why now? Well, a relevant paper got published in Physical Review D. Again, it wasn't today, it was almost 2 months ago, but a rational justification of the explosion of hype in the mid of November 2014 simply doesn't exist. Someone in NASA helped the media to explode – by this press release – and they did explode, copying from each other in the usual way.


The actual paper was published as the July 2014 preprint


Neutrino Lighthouse at Sagittarius A*


by Bai, Barger squared, Lu, Peterson, and Salvado. Their main argument in favor of the bizarrely sounding claim that "Sgr A* produces high-energy neutrinos" comes from something that looks like a timing coincidence.


Chandra X-ray Observatory and its NuSTAR and Swift friend – all in space – would detect some outbursts or flares between 2010 and 2013. And the timing and (limited data about) locations seemed remarkably close to some detection of high-energy neutrinos by IceCube on the South Pole.

IceCube saw an exceptional neutrino 2-3 hours before a remarkable X-ray flare seen in the space X-ray telescopes, and so on. The confidence level is just around 99%. Yes, the word "before" sounds like the stories about OPERA that would detect "faster than light" neutrinos.

To my taste, the confidence level supporting the arguments is lousy. But even if I accept the possibility that the neutrinos are coming from the direction of Sgr A*, they're almost certainly not due to the black hole itself. Or at least, I would be stunned if the event horizon – which is what allows us to call the object a black hole – were needed for the emission of these high-energy neutrinos.

In particular, I emphasize that the Hawking radiation for such macroscopic black holes should be completely negligible, and emitting virtually no massive particles (and neutrinos are light from some viewpoints but very massive relatively to the typical Hawking quanta).

They propose that the neutrinos are created by decays of charged pions – which seems like a very likely birth of neutrinos to me (at least if one assumes that beyond the Standard Model physics is not participating). But these charged pions are there independently of the event horizon, aren't they? If the neutrinos arise from decaying charged pions near the black hole, there should also be neutral pions and their decays should produce gamma rays (near a TeV) which should be visible to the CTA, HAWC, H.E.S.S. and VERITAS experiments, they say.

At this moment, the paper has 3 citations.

The first one, by Brian Vlček et al. (sorry, it is vastly easier to choose the Czech name and write this complicated disclaimer than to remember the non-Czech name), refers to IceCube that says that the origin of the neutrinos could be LS 5039, a binary object, which is clearly distinct from Sgr A* but I guess it's close enough. Correct me if I misunderstood something about the apparent identification of these two explanations.

Murase talks about the neutrino flux around the Fermi bubbles in the complicated galactic central environment. These thoughts have the greatest potential to be relevant for fundamental physics, I think. Esmaili et al. counts the paper about the "neutrino lighthouse" among 15 or so "speculative" papers ignited by the IceCube's surprising observation of high-energy neutrinos.

So I do think that this lighthouse neutrino paper was overhyped, much like most papers that attract the journalists' attention, but sometimes it's good if random papers are reported in the media as long as they are not completely pathetic, and this one arguably isn't "quite" pathetic.
Luboš Motl v 4:12 PM
Share