Kremlin and anti-Brussels parties in Europe

Another reason to be thankful to Russia?

The writers in The Independent, The EU Observer, and many others have agreed on a new story. 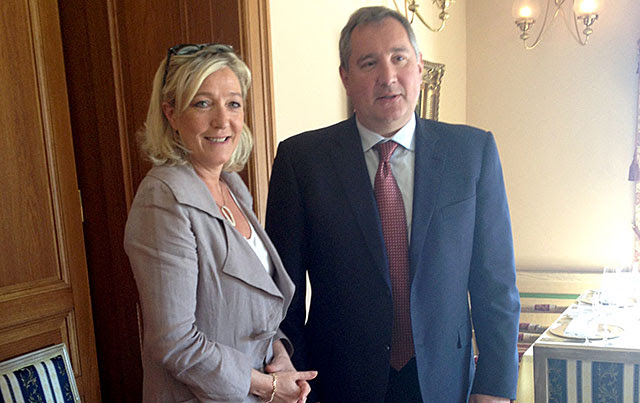 Putin is conquering Europe by funding anti-EU or far right or populist parties – the descriptions slightly differ in various articles. Most importantly, Le Pen's "Front National" in France received a EUR 9 million loan from a small Moscow bank, The First Czech-Russian Bank. (I would say that the word "Czech" appears in the name in order to beautify the name. It's the second best proposed name they had after "The First Luboš Motl Memorial Russian Bank".)

Various types of less explicit support for Jobbik, a far right party in Hungary, and a pro-Russian party in Latvia, and for FPÖ in Austria (which attended a summit in Moscow) is being mentioned, along with some vague comments involving AfD, the Alliance for Germany (a moderate anti-eurozone party in Germany).


There are a few more names that have appeared – with "evidence of strange flows" that is nearly non-existent. So I don't want to discuss these individual cases. It's a very mixed bag and the stories look unimpressive.


So let me focus on the "Front National" and on the European anti-Brussels parties as a whole and offer you a few observations.

If "Front National" is only borrowing money from the small Russian bank, I don't see anything interesting about it at all. What I find much more shocking is that "Front National" hasn't been able – we are told – to get a loan from any bank in France. Given the significant chances of the party to grow and become the most important party in France in the next elections, I find the lack of will to fund "Front National" counter-intuitive – and potentially a sign of some unhealthy political influences on the French banking industry.

At any rate, if the probability that a loan is realized depends on some "political characteristics" of the applicant, in this case FN, we shouldn't be surprised that it also depends on the location of the bank, in this case France vs Moscow. If it's politically incorrect for a bank to give a loan to FN – and I don't claim that it's certainly the reason, just think about the "if" possibility – then banks in Moscow may still be liberated from this political correctness and offer a different, partly balancing view.

If the atmosphere in the society were really free, mainstream parties – which (due to its huge support) includes FN these days – would surely find some bank in France that would lend some money to the FN. If FN has to ask foreign banks, it's strange, but it's still good that the foreign banks are capable of fixing the bias on the French financial market. I am not actually guaranteeing to you that it is a good enough financial idea to give a loan to FN; I am assuming that it is so.

But the main point I want to stress is that it totally ironic to see what are the international policies defended by the parties known as "far right" parties and by the other, would-be "mainstream" and "moderate" parties.

The "mainstream" and "moderate" parties seem to be doing everything they can to accelerate the start of a big war of the West against Russia, to impose and keep sanctions that affect people on purely national criteria (regardless of the costs on both sides: check the French streets covered by manure and potatoes due to the trade war), to promote a hysterically anti-Russian propaganda in the media, to breach contracts about multi-billion ships that should be delivered to a consumer, to pretend that the Ukrainians are übermenschen next to the Russian untermenschen (although they're almost identical people), to guarantee that all the citizens on the European and North American continents have the same opinions about politics that is created in the only one kosher center of the Western civilization (Gleichschaltung), to allow nationalistically overheated governments to exterminate inconvenient ethnic minorities, to label all people with the "wrong" nationality or "wrong" opinions as terrorists that should never be negotiated with and to dehumanize them, and to surround Russia by military bases as tightly as possible.

On the other hand, FN and other "far right" parties are defending the peaceful business-as-usual, the international trade and cooperation between different nations, the appreciation of the right of other nations to pursue different policies and values, the respect towards the right of significantly ethnically different provinces to decide about their status (Crimea), the understanding that individual citizens of European countries may choose their own opinions, the idea that they may listen news from many different sources, the opinion that they should deliver ships that were discussed in a very clear treaty, the philosophy that different groups of people or nations sharing the same or nearby territories should negotiate and respect the other party as humans and not fight, and so on.

The adjective "far right" was supposed to denote some similarity with the political regimes of Hitler or Mussolini. The only problem is that (almost) regardless of the perspective and chosen policies, the parties called "far right" parties are not far right, while most of those that are not called "far right" seem to be far right! The whole politics has been rotated upside down, by 180 degrees.

Between the American Civil War of the 1860s and 1936 or so, the Democrats and the Republicans have effectively exchanged their ideologies as well as strongholds. Equivalently (if you prefer passive transformations over active transformations), the parties have exchanged their names. ;-) In the 1860s, the Republicans would control the North, fund Big-Government projects, defend the social justice for blacks, while the Democrats dominated the South and wanted to keep the government small. This DEM-vs-GOP switch is bizarre and it may be hard to understand how it could have happened.

However, the U.S. example isn't "that" shocking. For many decades, both the Democrats and the Republicans would be close to the middle – perhaps in a more extreme way than they were in the recent era – and they would only differ in nuances, namely in the question which parts of the government should grow and which parts should shrink. The new era began in 1936 when the Democratic candidate, Franklin Delano Roosevelt, defeated his (accidentlly) small-government Republican competitor, simply broke this "near degeneracy", and kickstarted the pro-Big-Government Democrats as we still know them.

So it took many decades when everything was fuzzy.

But the switch we may be seeing in today's Europe might be faster, more abrupt, and more dramatic. We would never say that the "far right" parties were very similar to the "mainstream" parties. They were understood to be very different – even though some of these opinions could have been just images of propaganda even decades ago. And everyone would agree that a key defining feature of the "far right" parties is that they were pursuing (and "should" still be pursuing) policies that are worsening the relations between different racial and ethnic groups and the relationships between different countries. Do you agree that this was a good description of "far right" parties in the past?

Well, this description just doesn't work at all now, does it? It's parties we would consider "mainstream" parties for decades that insist on a Europe with "the only right opinions", so similar to the Third Reich, that want to spread hatred, worsen sanctions, amplify the risk of a war, and so on.

I have always supported "mainstream" parties associated with the peaceful relations between different nations. And I have always cared about the essence, the values, the true policies, not about labels. That's why I can't support the parties still often labeled as "mainstream parties" anymore. They simply no longer represent the policies that such parties would represent in the past – up to the era of the likes of Gerhard Schröder.

A flip is underway. I think that within years, it will be common sense – and parties such as FN, UKIP, AfD, and others will be becoming the new normal – hopefully the new normal in a peaceful Europe.