Nima Arkani-Hamed is the world's leading particle phenomenologist, at least among those under 45 years and my wonderful ex-colleague (and co-author). He's been mentioned in many contexts on this blog. More recently, he became a highly mathematically sophisticated theorist, too. That's why we would read about the twistor minirevolution that culminated with things like the amplituhedron, too. 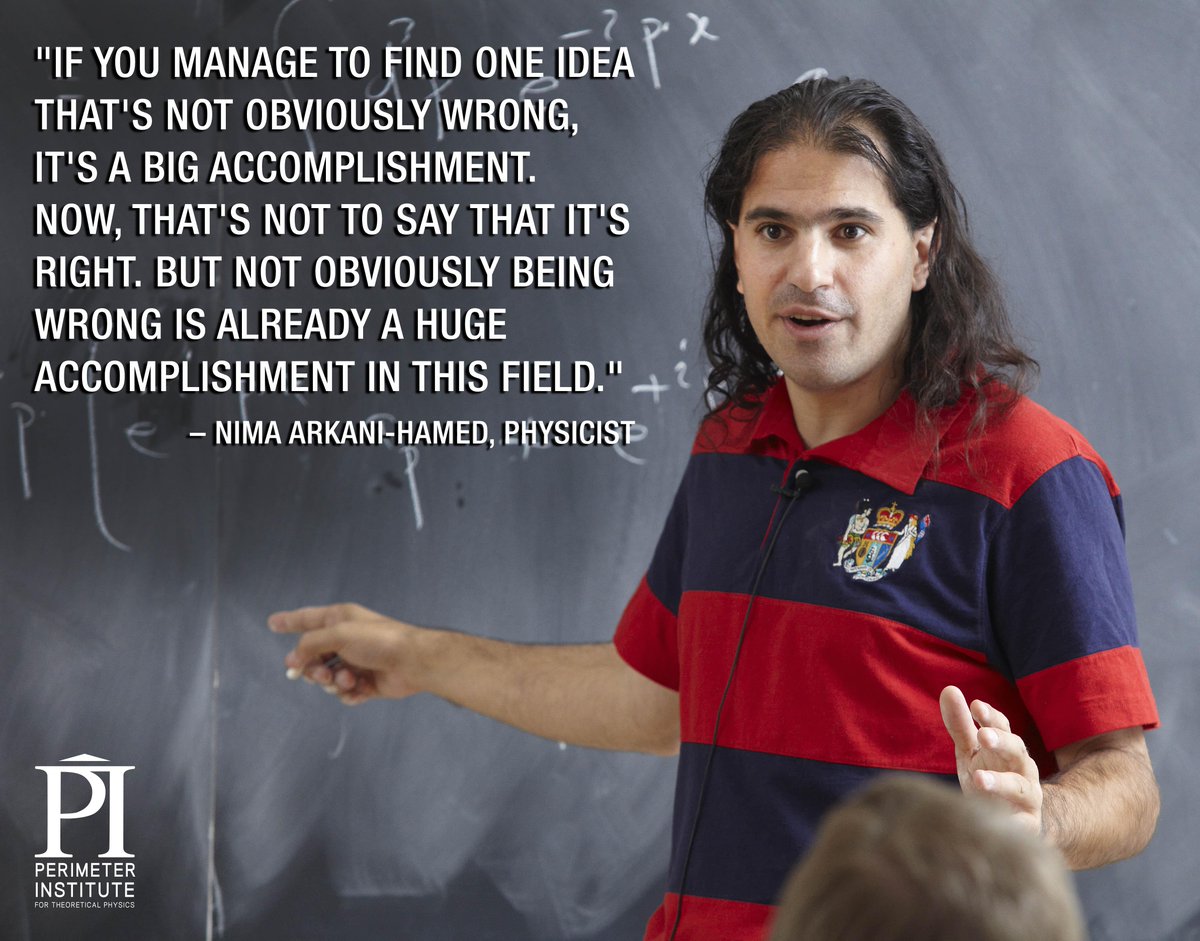 But a day ago, he gave a popular lecture at the Perimeter Institute in Waterloo, Canada. Because it's a popular lecture, it spends more time with things that other people have discovered, and not just Nima's own research. You may see the whole 85-minute lecture (the first rectangle), along with the people's comments (the second rectangle), here:


He was supposed to talk for only hour only, and then take questions. In reality, all of these 85 minutes were just his talk.


Like in many other popular talks, Nima describes the twin revolutions of the 20th century physics, relativity and quanta, and how they led to quantum field theory as our current "theory of nearly everything" (I think that this is Lisa Randall's term). And if you have listened to many popular talks, you finally get a chance to get a bit further.


There are Feynman diagrams and Nima describes the simplicity of the Standard Model based on particles and the corresponding fields. Conceptually, the picture is very simple. Why have the people missed it for centuries? Because something that looks like "details" from the short-distance viewpoint completely obscures the common origin of all the particles and forces we know.

He tried to focus on the interesting philosophical points associated with the Standard Model. Why did the things end up being so simple? Why are there just cubic vertices (well, there's also the quartic Higgs self-interaction)? Why is the menu offering the allowed spins so limited? He gets to quantum gravity, mentions why it's hard to write consistent, convergent formulae for the graviton scattering, why the string-theory-based amplitudes are the only ones we know that it work.

Nima also tells you that it's wrong to imagine that general relativity is an irreducible primordial theory generating all the wisdom – as well as special relativity as its limit. Instead, general relativity may be derived from more elementary starting points – from special relativity and gravity (and that's pretty much how Einstein did that, although in a less straightforward way). Elevators and carousels aren't really needed; the GR is a mathematical consequence of the (equivalence principle obeying) gravity and special relativity. Quantum mechanically, this produces spin-2 particles, the maximum possible values for massless (or light) elementary particles.

Units earned some special discussion. He says that he's never been quite a master of units and he confirms this point when he says that "2 meters" means "2 times a stick somewhere in Paris". In reality, it has meant 2/299,792,458 light seconds (light second is the path that light makes in a second) where a second is some number of periods of a specific atomic radiation (used in atomic clocks). And even before the speed of light was fixed to be 299,792,458 m/s, one meter was defined as some number of some wavelengths of a radiation, not from a French stick. And before that and before a short period of the length of a stick, one meter was 1/40,000,000 of the meridian etc. (In a sentence, Nima reveals that he does realize the new definitions.) It's stupid to use human-centered units such as the Parisian sticks and weights because it's expensive for our extraterrestrial friends to buy air tickets to France.

OK, some Nima presents some natural units and dimensional analysis to relate the weakness of gravity, the highness of the Planck scale, etc. He heuristically derives the inverse square laws from quantum fields. Now, why the spins are limited? He introduces helicities and says that it's very informative to focus on spinning massless particles decaying to two lower-spin massless particles at angles. By symmetries, he shows that the 3-particle interaction depends on no kinematic continuous parameters. It's a (coupling) constant. That's simple and helps us to analyze the 4-particle interaction. Now you have everything you need, you go to the grad school and learn to perform half a page of algebra. You find out that it may only work for spins 0, 1/2, 1, 3/2, 2, otherwise the function of energy and angles is inconsistent (with the Lorentz symmetry etc.).

Why the quantum gravity is hard? How hard it is to produce consistent formulae for graviton scattering? How does it break down in extreme conditions? None of the proposals work – but the Virasoro-Shapiro formula (closed string counterpart of the Veneziano amplitude – a notorious crackpot has called it the "Veneziano amplitude" and be sure that the Veneziano amplitude does not describe gravity because it applies to open, not closed strings; the graviton expression differs by an extra polynomial prefactor from the V-S formula). It's a ratio of generalized factorials, no ghosts are there, it just looks great.

Nima points out that as a child, one may be confused and think that people chose strings "randomly" from an infinite list of possible shapes hiding inside the particles, including fractals and little green men. But it's the other way around. They tried to assume no compositeness at all and just reached the formulae that had the desired properties. And after that, they reversely extracted the shape of the underlying objects – and they were strings. So the arguments forced them to learn about the shape; it is not true that the stringy shape was the starting assumption. This success doesn't prove that there are no other formulae that work but the success does prove that the task is amazingly constrained.

He points out that this uniqueness of string theory is no sociological conspiracy. Imagine that someone in the audience finds another way for these things to work. Tomorrow, she will become the superstar of theoretical physics. How could we have overlooked this extra loophole for 45 years? How is it possible that you, a non-member of the club, could find it? The point is that there is a way to decide "right or wrong" before any experiment is done here: even a chance to be right is extremely precious and low.

Nima says that the issues of the graviton scattering are not the deepest problems of the unification of GR with QM. To measure things (distances etc.) exactly, with a great resolution, we need huge apparatuses – but they gravitationally collapse in the presence of gravity. So the spacetime inside isn't operationally real; it can't be probed arbitrarily accurately. It's hard to define exact observables in quantum cosmology (in de Sitter space etc.).

Also, the vacuum is exciting in quantum field theory. In the presence of gravity, it also curves the spacetime; the cosmological constant problem is hard. Fine-tuning. A similar (but numerically less severe) problem with the low Higgs mass. The spin-3/2 particles and SUSY may be the solution of that, for the hierarchy problem. SUSY is like a theory of extra dimensions but anticommuting ones. Superpartners follow from that. It reduces the cosmological constant problem (from the discrepancy of 120 orders of magnitude down to 60 or so) – it cancels the fluctuations between bosons and fermions. With SUSY breaking, this solution is still inadequate.

And there's lots about the possible future discoveries at the LHC – SUSY by 2018 or so or the multiverse, if I simplify it a bit, and so on. Our time is closer to a decisive time, a revolution. The big questions are already being asked in a meaningful way so it's an exhilarating epoch to do physics.

The comment section is fun. For example, there is an 11-year-old kid from Japan excited about quantum mechanics, and many more. ;-)
Luboš Motl v 7:45 AM
Share