Zeman: Velvet Revolution started by the rumor about the death of student Martin Šmíd

The current and previous Czech presidents, Zeman and Klaus, were debating about the Velvet Revolution and related topics. 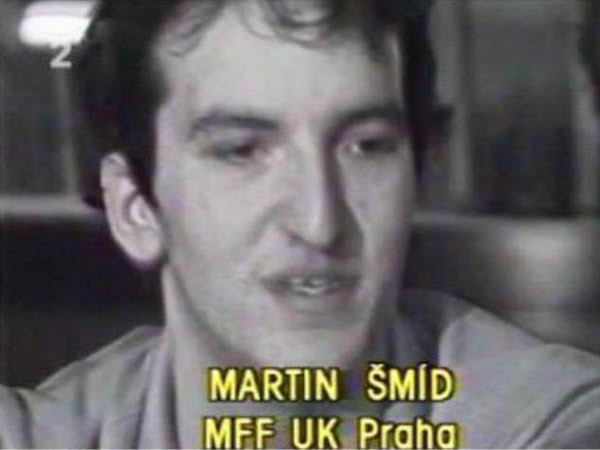 Martin Šmíd from my Alma Mater is the main hero of this blog post.

To remind you, the fall of communism in Czechoslovakia – the Velvet Revolution – began exactly 25 years ago, on Friday, November 17th, 1989, when the police used some amount of violence against the peaceful student rally in Prague (where all the events in this blog post took place). The students of the Charles University, my Alma Mater (that was later, I was a high school student at the revolutionary times), would be remembering the 50th anniversary of the Nazi murder of 9 Czech students in 1939.


If you allow me this intermezzo, let me tell you something about the November 17th, 1939 events, too. (Yes, the periodicity of 50 years in certain important events in Czechia is exact. We're exactly in the middle of the next period now.)

On October 28th, 1939, Czech students would remember the anniversary of the 1918 birth of Czechoslovakia. It was about half a year after the Nazi occupation of the remainder of the Czech lands that had become a protectorate of the Third Reich. Jan Opletal, a student, was shot into his belly and he would die on November 11th.

On November 15th, thousands of students would attend Opletal's funeral. Two days later, on November 17th, 1939, nine students were executed by our officials from a somewhat superior race, the Czech universities were closed, and more than 1,000 students were sent to Sachsenhausen, a concentration camp. That day, November 17th, became the International Student Day for that reason.


Fifty years later, on Friday, November 17th (I remember those days rather clearly), students would march from Albertov – a place of the Faculty of Natural Sciences and very close to Karlov, a building of my math-phys Alma Mater.

(The starting point is also very close to Viničná Street, the place where Albert Einstein would work at the German University in 1911-1912 and where he appreciated the importance of the equivalence principle for a modern theory of gravity. But the place, Albertov, is named after a different Albert, a physician named Eduard Albert who also taught at the Faculty of Medicine here.)

They would march towards the National Theater, if I simplify it a little bit, and they were beaten by the police. Zeman says that the violence against the students wasn't unprecedented or remarkable by itself. Brave students such as himself would be used to batons – you're sometimes hit twice or thrice, not a big issue, Zeman says, sometimes you may just run away: the coffin dodgers from the People's Militias (LM), a communist paramilitary organization, were ludicrous with their batons, Zeman boasts. ;-) I actually agree with him. The violence on that rally wasn't too different from the violence during the Palach week (January 1989) and others.

What was different about the November 17th rally was a lie, namely a death rumor.

That's what Zeman believes to be the key event that kickstarted the Velvet Revolution. I will immediately get to the identity of the dead student because it's pretty funny and somewhat linked to me. But before I do so, let's notice that what different smart people say about the "causes of the fall of communism in Czechoslovakia" are vastly different things, indeed.

Some people employ the international optics and say that the fall of communism in Czechoslovakia was either due to Gorbachev in the USSR, or both things were due to Ronald Reagan's and Margaret Thatcher's wise efforts. It's true to a large extent, I think, but these people usually overestimate the "synchronization" between the different communist countries at that time. We were really mostly independent of the Soviet Union. We're used to imagine that this imperfect independence meant that the communism in Czechoslovakia was less bad than the Soviet one. But in the late 1980s, it was really the other way around. Our communists were much more hardcore than Gorbachev – and, frankly speaking, extremely unhappy about him. Other socialist countries were finding themselves in completely different stages, too. Even today, there are huge (and perhaps increasing) differences between different post-socialist countries and it's a sign of the Westerners' ignorance about geography that they're unable to understand this simple point.

So even though the Berlin Wall was falling and Poland and Hungary would be reforming or dismantling communism in their specific ways (and the Soviet Union would at least introduce glasnost and perestroika), there was really no "unavoidable" reason for communism to collapse in Czechoslovakia. They would lose some of their comrades abroad but that doesn't make the collapse inevitable. Ask Fidel Castro or anyone else like that.

Other pundits would tell you that the fall of communism was made possible by the dissidents. I would count myself as a dissident, a teenage dissident, for many reasons. And I had a plan to sign Charter 77, too, but the revolution came more quickly than I would act. (It would be completely irrelevant, anyway.) OK, dissidents were fine but their number was very small – thousands of people only – and the impact on the majority society was limited. They were unconstructive in many respects (and let's omit comments on alcohol, promiscuity, and the financial support from the West that gave some "astroturf" flavor to this opposition), I would agree with folks like Klaus. The regime was emptied and had lost all enthusiastic enough advocates, so it has collapsed from within.

On the other hand, I wouldn't agree with Klaus that the dissidents were quite useless for the direction of the post-1989 transformation. I think that without something like Charter 77 and Havel, Czechoslovakia would be destined to attempt something close to reformed socialism once again. Aside from the communists, everyone else has looked like an "ordinary person" – from a political viewpoint – so he wasn't supposed to determine the political direction in a major way. So even though Havel was always an idealist left-wing intellectual of a sort, his complete formal independence from the communist party – even the "humanized" version of the party in 1968 – was probably needed to allow a new regime that could separate from communism "entirely". It could have been needed for Klaus' economic reforms, too. Of course that once people understood the concept that we may have completely new politicians like Klaus with programs that had nothing to do with the past, Charter 77 wasn't needed at all. But Charter 77 may have been needed to get to that point.

Those are complicated issues. We can't run the very same experiment again, without Havel or Charter 77, so I am not sure what would happen. Quantum mechanics almost guarantees that the precise result wouldn't be quite determined, I guess. ;-)

But let's stop these issues. Zeman inserted a completely different, original flavor to this discussion about the "causes of the revolution", a very microscopic one. Neither Reagan nor Thatcher or Havel or Gorbachev or Klaus. The Velvet Revolution was started by Martin Šmíd and his death. Well, his apparent death.

The rumor that the cops killed a Charles University student with his name circulated and was spread by Radio Free Europe, too. I probably learned about it on Saturday morning from the radio – on the following day. But maybe I did know it on Friday night, I am not 100% sure. It is not too important.

There were two students at the university with that name (both first name and last name) but they meant a rather specific one, Martin Šmíd from my Alma Mater in the narrow sense, the Faculty of Mathematics and Physics. He would be majoring in mathematics and, even more precisely, in Probability and Mathematical Statistics. And the cops killed him, we were told.

On Sunday, the communist TV showed this particular Martin Šmíd and they claimed that he was alive, and so did he. But you know, it was just a communist TV so it couldn't have been trusted too much. So the rumor was living its own life and it has probably played an essential role for the creation of various revolutionary committees – soon to be known as the pan-political unifying Civic Forum (OF) movement – in various occupations.

What I haven't told you is a bizarre role that the communist secret agency (StB, our KGB) played in the propagation of the rumor. A person was apparently lying dead on the sidewalk and StB deliberately claimed that it was the student Martin Šmíd. In reality, it was Mr Ludvík Zifčák, an StB cop (codenamed Agent Růžička [a little rose]). The StB pretended that a student was killed in order to show that the opposition is really extreme and with the goal to discredit the opposition! Well, that didn't work too well, comrades, did it? ;-) The communists – obviously lacking a P.R./psychology course – shot in their foot.

I think that I've never met Martin Šmíd at the university but I did interact with him on the Internet – greatly. In fact, this guy – who is working in IT and who is a good musician, too – has always been a bit crazy for a student of mathematics and physics. Why? He believed in astrology.

So (science-fiction writer) Ondřej Neff's "The Invisible Dog", the most famous "personal newspaper" on the Czech Internet at that time (it wasn't called "blogs" then), would publish 5 parts of long e-mail conversations between me and Martin Šmíd sometime in Fall 2000 (Šmíd would discuss in this way 11 years after he died LOL; I was at Rutgers at that time). Right now, I am only able to find the first part of this 5-part exchange. You can imagine what arguments I was using – and he was defending astrology as being compatible with our knowledge. People were clearly always crazy – maybe I just wasn't that allergic to stupidity yet. Who knows.

When he was a student, Martin Šmíd would also construct horoscopes along with a physicist who would become rather well-known in the world afterwords but I won't tell you what his name is! ;-) 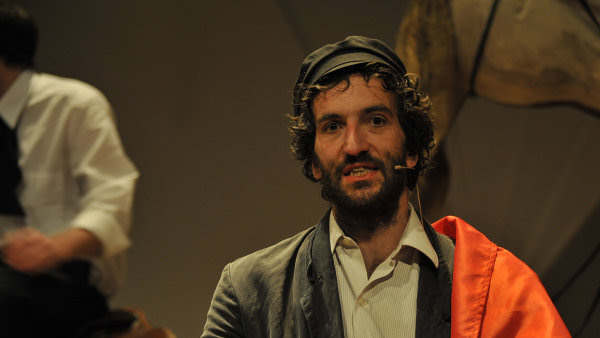 Šmíd is employed by the Czech Academy of Sciences now.

The purpose of this story is that if you're a mathematics student, you can be the main reason – according to the third post-Velvet-Divorce president – why communism collapses in a country with 15 million citizens. And it's not bad. So don't be afraid of being a mathematics student. And don't be afraid to be killed as long as you survive just well. ;-)
Luboš Motl v 7:41 PM
Share