It is well-known that net neutrality is just another communist plot by people who are detached from reality and who advocate egalitarianism at every level and in every aspect of the human lives, being completely unable to comprehend that differences are crucial for the system to work efficiently and to make people happy, safe, and prosperous. 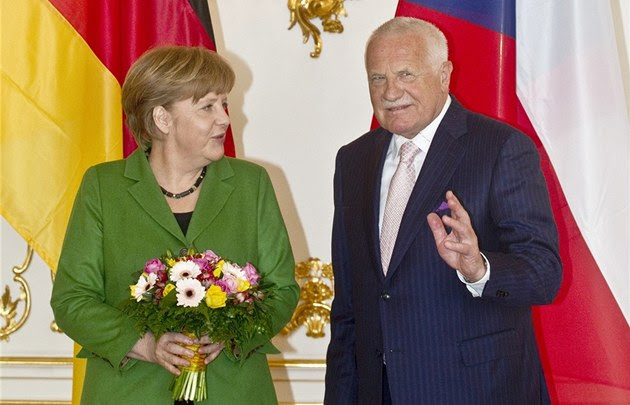 Their proposals – encapsulated in childish, pleasingly sounding propaganda – threaten not only the further progress of the Internet but even the efficiency and safety of the Internet as it has marvelously developed in the recent decades. There are very good reasons why some types of data should enjoy a higher priority than others. The reasons why this inequality is being introduced may be presented as the efforts of the Internet providers to increase their profits. But there's really nothing "dirty" about profits: the Internet providers – ISPs – increase their profits because they optimize how their service works for others.

Left-wing politicians – such as Barack Obama and most of the folks in the European Parliament – love to uncritically promote "net neutrality", a government-imposed equality between all packets. However, this concept has earned a rather formidable foe: the most powerful woman on Earth, Angela Merkel.


On Thursday, Merkel would give a keynote speech at the University of Berlin and she called for the differentiation of the urgency of different types of data. Well, she literally called for a two-tier Internet, with a higher guaranteed reliability for important special services.


The examples she had in mind – and she has explicitly mentioned – are the data needed for driverless cars etc. and for telemedicine. It is a matter of common sense that the packets carrying critical information that may decide about human lives in the following seconds shouldn't get stuck because a couple of people just got obsessed with a new movie they are streaming from Netflix.

It's great to see that a chancellor is able to figure out such things – I am not sure whether she has constructed the argumentation by herself but I can imagine she has, she's not stupid, even if she lacks the ideological compass that Margaret Thatcher used to have, if I repeat the words by Czech ex-president Klaus. On the other hand, Merkel's way of talking about the problem is still being presented from a big government's viewpoint. A smart government will arrange a higher priority for packets critical in driverless cars and telemedicine, she suggests.

However, the point is that one doesn't really need a politician for that. Such an insight – and the corresponding decision – doesn't have to be achieved by a top German or top European politician. Similar decisions are being made in the relevant companies rather frequently. And the professionals in those companies arguably know much more about the real risks than politicians. Of course that if Internet-driven driverless cars became common, the private companies would quickly find out that they simply must guarantee slightly more reliable Internet lines for those services because if a car doesn't know about a dangerous object 100 meters in front of it, it's worse than if your streaming of a movie gets interrupted for 3 seconds.

We also learn the following thing:


Net neutrality campaigners in Germany say that this is another example of Merkel's party, the conservative Christian Democratic Union (CDU), working with the telecommunication lobbyists.


And it's a good thing, too. Telecommunication lobbyists are not "dirty", either. They are the communicators who try to convey the knowledge, interests, and experience of the telecommunication industry to the politicians. And this is extremely important if and when the government is likely to intervene into this industry in some way. The government folks may be sufficiently experienced as Internet users – and they may know the kind of things that the consumers want – but they may be completely unfamiliar with the industry's viewpoint which is why it is critical for them to listen to this viewpoint if they want to increase the probability that the political decisions won't be incompetent and harmful (the probability is low, anyway).

The telecommunication industry is much more experienced, important, productive, useful, and rational than some random left-wing activists which is why a responsible politician should work with them much more than with those activists.


"This statement is taking the position of telecommunications firms. This is not the net neutrality we want, but a move towards the creation of a two-tier network where content becomes preferred based on who pays for it to make it so," said Markus Beckedahl, Berlin-based founder of netzpolitik.


Clearly, it's a far left-wing nutcase who hates the money and the idea that the money matter at all. But it is totally sensible that one can buy things for the money. The money-based economy is the most important reason why the contemporary society is more developed than the primitive communist society of hunters or someone like that thousands of years ago.

There is no reason why it should be impossible to buy a speedier connection to the other side of the Internet cable – and it's already happening, both for the individual Internet users and for the companies. Who pays more for something may expect to get a better connection. And more important Internet services should naturally demand a better connection – which may usually be translated as a more expensive connection, too.


"The revolutionary thing about the web is that the content can be decided on by anyone and, the principle of it, is that anyone can access it. But if you poke holes into net neutrality the way Chancellor Merkel suggests, then it's no longer democratic," he said.


Right. Anyone can in principle access it. But he or she has to pay for the access. And if he pays more, he can have a better access to the other side. And be sure that if the safety of his or her own cars or airplanes or spaceships – or cars or airplanes of the clients or lives of surgeon's patients – is at stake, he or she is likely to pay for a better access to the Internet wires and routers. It has always been like that.

There is nothing non-democratic about different people's and different companies' being different and having different speeds of the connection to others. When this guy said it was not "democratic", he really meant that it is no longer a "communist type of the Internet".


"We can't talk about net neutrality if the capacity to have it isn't available," [Merkel] said.


The advocates of net neutrality – much like the advocates of the same healthcare for everyone or (very high) minimum salaries and similar concepts – always seem to suggest that this form of equality makes the experience better for everyone, for those "oppressed" people at the bottom. However, the total amount of data that is transmitted is pretty much given by the capacity of the broadband cables, routers, and facilities. So if you speed it up for someone, you make it worse for someone else! And the someone else may very well be an ordinary person who is a passenger in a driverless car.

And the faster, more reliable access of certain Internet services to its users usually has extremely good reasons, sometimes linked to human lives. But even if human lives are not involved, of course that some Internet services are more important and more dependent on safety of connection than others. The communists who want to deny these basic facts about the world are dangerous.

Incidentally, while I am praising mainstream Western female politicians, I want to say that Hillary Clinton's remark that the U.S. should use all tools and partners to promote peace and try to empathize with everyone else, including the enemies (and show the corresponding general respect), is utterly reasonable and wise, and the Fox News host's and guest's opposition is one of a mindless hatred. Also, their comments that Hillary wants "unilateral disarmament is pure rubbish; she didn't suggest anything of the sort.

Clinton is surely not saying that the beheading of the U.S. citizens (or Pearl Harbor) wasn't vicious or should be tolerated or even supported. But these acts' being vicious doesn't mean that one can't try to understand what is going on in those people's heads – and it doesn't mean that one should strip everyone remotely linked to these things of his or her human dignity. It won't ever be OK according to the U.S. values and standards and interests but there is still a difference between understanding what they feel and why they do things they do; and understanding nothing. And a person understanding his enemy is more likely to exert effective pressure on the enemy.

I would add that aside from the enemies, American politicians (and citizens) should also try to learn to empathize with the allies – when they are different than just mindless puppets and clones. And I do mean obvious examples like the current Israeli government building settlements – as well as European governments that see the damages caused by the sanctions. In most cases, Americans actually know how to understand differing perspectives of the allies: the same attitudes typically exist on the U.S. political spectrum as well. The leaders of majorities in the U.S. should however understand that forces that seem to be a minority in the U.S. may very well be the majority in other (I mean Western) nations as long as they are sovereign!
Luboš Motl v 10:54 AM
Share