RealClimate's opinion on the WUWT widget

Two months ago, it has been ten years since this weblog was founded. Two months later, a group of fraudulent proponents of the climate hysteria founded RealClimate.ORG, a domain designed to spread misinformation about the climate issue.

I never planned to celebrate the 10th birthday because I find such celebrations stupid and I am shy – but if you want to drink some whiskey at home, be my guest! After these ten years, this blog run by one person (but made so inspiring and kind by many of you, thank you!) has welcomed the same number of visitors as RealClimate.ORG which is run by a dozen of folks, about 50% of the "global community" that wants to force the mankind to pay trillions of dollars. Not bad. Congratulations to the 10th birthday of RealClimate.ORG.

Lacking the Lumoesque shyness, modesty, and focus on the beef, the RealClimate.ORG website has published not just one but three Happy 10th Birthday blog posts.

Meanwhile, their friends celebrated, too. All of them flew to Peru, Lima and set a new world record in the money wasted for a hysterical climatic conference. Their Greenpeace comrades, also in Peru, damaged and desecrated the Nazca lines by an ancient civilization that have been carefully protected for 1,500 years. (Ironically enough, the most irreversible damage has been done by the Greenpeace officials' footprints, too. The Peruvian government normally demands special shoes etc. for all the visitors.) The similarity of this vandalism to the liquidation of heritage by the Islamic State is way too obvious.

The Peruvian government is suing Greenpeace and because of the pricelessness of these geoglyphs, the Latin American nation undoubtedly has the moral right to liquidate the disrespectful terrorist organization. But my realism prevents me from believing that this outcome will actually materialize. But I want to discuss the previous RealClimate.ORG blog post – one about a... widget.


Stefan Rahmstorf wrote a rant for RealClimate.ORG whose title was


The most popular deceptive climate graph


It's pretty comical that a group of people who demand trillions of dollars to be wasted for the pseudoscientific fantasies and who claim to define the mainstream pick the 137th most important piece of software on a blog of a climate skeptic as their target.


But it's simply the case that Anthony Watts' climate blog has traffic that exceeds that of RealClimate.ORG – or my blog – by a factor of fifteen. Among many other things, Anthony Watts also maintains a "climate widget"

that you may find in the right sidebar of The Reference Frame, too. The RealClimate.ORG men who are getting tons of money are dreaming that they will earn a footnote in Anthony Watts' memoirs, or something like that, so they decided to analyze the widget. Here is the summary of Rahmstorf's criticism: 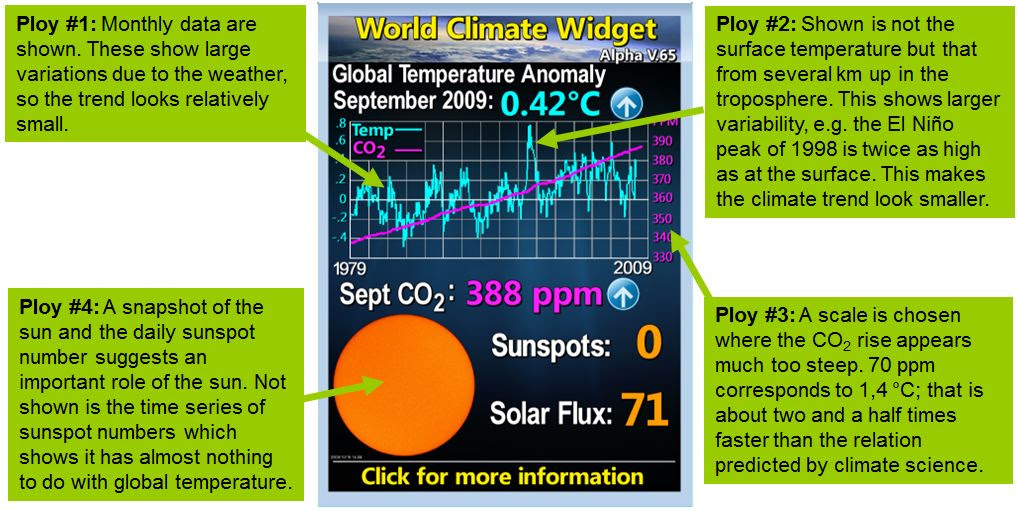 Well, I happen to strongly disagree with all these criticisms. In other words, if someone created a widget that would respect these criticisms, it would be much more misleading than Anthony Watts' widget. Let me say a few details about the individual points. WUWT published its own reply to the RealClimate.ORG criticism of the widget.

Watts is criticized for using the monthly data. Why doesn't Rahmstorf like the monthly data? Well, the answer is obvious and he openly admits it. He doesn't like it because the monthly temperature anomalies oscillate and the "global warming trend" that he would like to amplify and emphasize largely gets lost in the noise. So it's bad, isn't it?

The problem with this criticism is that the monthly oscillations are completely real and different temperature datasets agree about them more precisely than they agree about the trend. In this sense, these wiggles are more real than the "global warming" itself! The monthly noise is completely verifiable. Indeed, in combination, the data imply that the trend visible in recent decades doesn't really exceed the normal noise. And you know what? It just doesn't.

Any averaging of the data designed to show a simpler, smoother, perhaps nearly linear curve would be fraudulent. Such a manipulation with the data would convey the message that there is a clear underlying trend in the temperature data. But there is no clear underlying trend in the temperature data. The previous sentence has a very clear meaning: the amount of trend-like warming e.g. in 35 years is comparable to the noise – or at least, it isn't substantially greater than that.

So the temperature data are pretty nicely compatible with their interpretation as "noise", especially if you choose some pink noise (noise of an appropriate "color"). This correct conclusion may only be obtained if we carefully look at the relative magnitude of the noise and the hypothetical underlying trend. It is very clear that any method to artificially suppress the noise is fraudulent because it makes the signal-to-noise ratio look greater than it actually is.

Rahmstorf says that the surface data, and not the lower troposphere temperature data, should be plotted because "the surface is where we live". The difference between the surface-based and troposphere-based datasets isn't too large but let's assume that we care about the difference.

Why does Rahmstorf prefer the surface data? Because they show a slightly higher underlying trend – still negligible for all practical purposes.

Why is it more relevant to draw the troposphere's temperatures? There are at least two reasons:
When we look in the troposphere, we see a trend that is compatible with the interpretation of noise and that is 2-4 times smaller than what is routinely predicted by the global warming hysterics. So the predictions are falsified, the would-be science behind the hysteria has been discredited, and it's arguably inconvenient for those who have been spreading this hysteria for years.

But this disagreement is not the fault of Anthony Watts' widget.

I must make one more comment about Rahmstorf's assertion that "no one lives in the troposphere". His alternative is to plot the global mean temperature near the surface but no one lives at the "average of the whole globe", either! Everyone lives at some particular place of the surface at every moment and if we plot the local weather, we will get much higher variations – even relatively to the monthly oscillations that Rahmstorf disliked – and indeed, the "global warming" would become almost entirely invisible. After all, 30% of weather stations saw a cooling in the last 100 years or so.

Ploy #3: the Sun should be overlooked

You know, I don't consider the hypotheses that the fluctuations in the solar activity significantly influence the climate on Earth to be settled. Clear evidence doesn't exist in one way or another. The Sun surely has some impact – but whether it was producing a temperature change in the last 40 years that is comparable to the apparent "trend-like" temperature change during that period is as open a question as a similar question for CO2.

But the point is that many users of the widget are interested in the Sun and its possible role in climate change. And the widget correctly conveys the idea that both CO2 and the solar activity may influence the climate and we may want to study both of them. None of the two graphs is accurately (and not even approximately) mimicking the shape of the global mean temperatures.

At the end, it is rather likely that neither CO2 nor the solar activity are extremely important. That's surely what e.g. Richard Lindzen would tell you. It's a fallacy to try to attribute the climate change and look for an "external" and deterministic explanation. The wiggles in the temperature graph are likely to be random numbers produced by the internal complex processes in the Earth's atmosphere (and oceans) that are largely unpredictable.

But given the apparent correlation of the solar activity with some cold periods in the history and because of the known candidate theories that allow the solar activity to modulate the climate, it is surely fair for the widget to show some of the "solar weather" – after all, this phrase contains the word "weather", too.

The graph on the widget shows both the global mean temperature (in the troposphere) and the (nearly linearly increasing) CO2 concentration. They have different units so of course the relative scale on the y-axis is a matter of conventions.

However, the widget uses a simple convention that maximally uses the area in the whole rectangle reserved for the graphs.

And there's one more reason why the relative scale in Watts' widget is nearly perfect: the line representing the CO2 concentration may actually be read as the changing expected temperature predicted to be a function of the CO2 concentration by IPCC-like models. And the CO2-induced temperature may be compared with the actual temperature. They may be placed in the same graph, with the same scale on the y-axis, and when we do so with the IPCC-like values of the sensitivity, we indeed get what Watts' graph shows!

Obviously, the violet CO2 line is much steeper but that's because the climate sensitivity preferred by the climate hysterics indeed overestimates the trends actually observed in the real world by the factor of 2-4!

So Watts' widget does seem to convey the message that the CO2-based predictions for the warming are falsified by the observed data – and this message is entirely correct. Mr Rahmstorf may find this truth inconvenient but this discomfort doesn't make the truth any less true.

For these reasons and hundreds of others, I consider Herr Rahmstorf to be an immoral lying crook. He is a splodge on the European science.