Charlie Hebdo: France mustn't allow to be changed by murders

Street view: Interestingly, the Google Maps photograph from August 2014 shows a police car at the place of the tragedy. Unfortunately, the protection wasn't permanent and perfect. But the assigned bodyguard for Charb, the editor-in-chief, was there yesterday as well and he was killed, too.


Two hours ago, gunmen invaded the French satirical anti-religious left-wing magazine Charlie Hebdo ("Charlie Weekly") and shot at least 12 people (which includes two cops and the cartoonists named Cabu, Charb, Tignous, and Wolinski). See Wikipedia on the terror attack. The publication has had a long record of controversies involving Islam (and other religions). 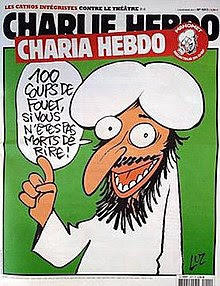 In November 2011, the magazine tried to please the Muslims. They renamed themselves as "Charia Hebdo" and named Prophet Mohammed as their new editor-in-chief. Even this gesture of peace wasn't enough. One day later, the headquarters were fire-bombed and the servers hacked.

Now, we've seen the mass murder – Kalashnikovs and rocket launchers were used half a mile from Notre-Dame today – and it is no longer funny.


The jokes by this magazine have always been provocative. Some people like them, some people dislike them. But according to the pillars of the Western civilization, no one has the right to violently do something about their existence. They have the right to make fun of Allah, Prophet Mohammed, and any other killer or clown – whether they are a real living religious leader, a historical figure, or a virtual ghost.

People have the right to believe in various religions and their holy cows – but they have the same rights to believe that these holy cows are stinky animals and the religion is a pile of stupidity and backwardness.

Twelve people is a lot. It may drastically change or kill the magazine. If a magazine like that were killed, the discourse in France would seriously change. Within a few years, the Islamists could make France ready to become an Islamic state. They could achieve this outcome by the one-murder-at-a-time (or a-dozen-of-murders-at-a-time) method.

As you can see, I am assuming that the perpetrators are Muslims. I don't want to paint the Arab on the wall but because the attackers shouted 'we have avenged the prophet' and "Allahu akbar", something inside me is telling me that the culprits were unlikely to be Buddhists. However, some witnesses seem to say that the killers spoke French with no accent.

Street view: here is the place where they shot the injured cop

I think that France shouldn't allow it. It's illegal to murder journalists in this way, of course. But if France weren't able to reduce the probability or frequency of similar acts, it would effectively become irrelevant that murders are illegal. The conditions dictated by the terrorists would become as important as the French law if not more so. If a certain kind of murders is becoming more frequent, it should mean that the government should strengthen the policies to fight against this kind of crime.

It would seem reasonable to increase the monitoring of dangerous activities within the Muslim minority. It should become mandatory for everyone to inform police about all planned violent crimes. Maybe, Muslims should be forced to sign this arrangement, that they will cooperate with the police regardless what Allahs, Mullahs, and other Mohammeds say – and if they refuse, they should be deported. Or something else should be done that will make similar murders less likely in the future.

Street view: first ten seconds, from 0:15 to the end

I also think that others should actively help Charlie Hebdo to resuscitate their staff and the magazine should be given a better police protection.

My broader point is that France should better realize that these are not just isolated murders analogous to other random murders but a part of a campaign that is gradually and systematically reshaping France in a direction that sane French people should find highly undesirable, to put it mildly. And that's why not just these individual crimes should be dealt with; the campaign should be opposed in some way as a whole, too.

By the way, it's amazing what Wikipedia is saying about the event right now:

On 7 January 2015, at least two gunmen opened fire at the Paris office of Charlie Hebdo, killing at least 12 (two police officers), and seriously wounding at least 10.[24][25]. It's possible that the dead employees are burning in hell now. Fυck wikipedia and "Jimmy" Wales


It's not really possible that the victims of the terrorist attack are burning in hell – because nothing like "hell" exists. But the bloody hell-believing supporter of the mass murder may be praised for learning to write – it is impressive.