Angela Merkel ruled out additional debt write-off for Greece, after the 2010 bailout – which meant to artificially reduce some interest rates, too – and the 2012 haircut, i.e. orderly default. Germany will be kind to anyone who follows the rules, she wants Greece to stay in the eurozone if possible, but a new write-off is really not possible.

The BBC chose a picture of a frustrated meditating Merkel in the dark. The top Czech news server iDNES.cz (CZ) decided that a very different picture is appropriate for this kind of news. ;-) 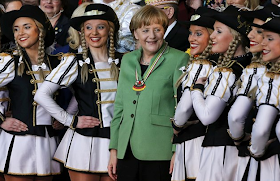 I found the most popular reader comments under the article entertaining (with some traces of the characteristic Czech humor) – and the consensus which probably applies to the whole Czech Republic is rather clear. Here is the translation of these comments. The header contains the author and the count of the helpful-unhelpful votes.

I understand the Germans that they no longer want to subsidize the Greek welfare state with increasing amounts of money. In the elections, the Greeks have spoken: Yes to the piling of the new debt. They have the right to decide in this way but the responsibility for the consequences mustn't be transferred to others. They have the right for poverty, begging, and bankruptcy if they wish so. However, they don't have the right to blackmail and to live out of other people's money.

Tomorrow I will try to visit my bank and propose them to forget about the mortgage for my house, which I was supposed to repay for 5 additional years, and give me another loan to buy a villa I have been dreaming about, one in the Austrian Alps, which will bring the slopes closer to my home.

I am a fan of the Greek way... the 14th pension etc. If we don't have enough money, let others pay for that – for example the EU, Germany... We have the right to get it. We won't repay the debt because we won't allow the European Union to trample upon our rights. ;-)

It is still not clear to me what others are talking about. When I borrow (e.g. a mortgage), then I have to send the payments according to the conditions I agreed with when the loan was negotiated. If I stop the payments, it's up to the creditor to deal with me in some way. If I want to find a sensible way to please both sides, then fine. If I don't want to pay anything, then just go away from the house to the street and help yourself in any way you want. Maybe it's time to send the Greeks out of the [EU flag] and take the gloves off.

The Greeks have voted for the Left and the communists while hoping that one doesn't need to pay the debt, as we were already hearing from Mr Jiří Quimby Paroubek [a fat authoritative social democratic ex-PM].

It's up to the stupidity of the Greeks so they may continue to walk along this path. Before they will understand that the world is going in a different direction and it's too late for them.

As far as we are concerned, we should primarily take care of ourselves. Greece should act as a warning for us. Even though the Czech Leftist... WHO KNOWS?...

Greece has devoured its assets, borrowed a lot from all over Europe, and now it is crying that the situation is hopeless and the only solution is to forgive the debt. At the same moment, they will increase their living standards by raising the salaries and creating artificial jobs in the public administration. This is a nice way of solving the state's fiscal crisis and the problems with the commitments to the creditors...

If the Greek debt will be forgiven by the creditors again and again, all of us may very well team up and vote for the communist party that will prefer not to repay any debt either and that will promise a generous welfare state for the rest of the eternity or at least up to the bankruptcy. It depends on how patient others will be in forgiving or postponing the debt in order to preserve the illusion of the unity. It's not just about Greece, it is about many Southern states that must know that it is not possible to indefinitely pile up debt without consequences. I understand that the ordinary Greek thinks that he personally hasn't done anything wrong and he shouldn't be responsible for the consequences. But the character of the governments and politics they had determines the future that awaits them. Most of the Greeks were voting for those who gave the voter what he wanted regardless of the question whether the government could afford it. Now they did exactly the same again, in a situation that is even worse. They said Yes to an even faster piling of the debt because they didn't like where Greece has ended because of its previous borrowing. So yes, they deserve the consequences for their not having learned the lesson.

Debts should be paid. Fine, we may forgive the interests because they can't afford them. But the principal must be repaid in its entirety. Lend $50 to your neighbor, he will return $25 and he will want to borrow again.

But it is true that the EU has helped them to this situation when it allowed them to get this far. This trend should have been stopped earlier. The common currency has helped that, too. If each country still had its own currency, the exchange rate could be adjusted and the business-as-usual could continue.

The Greeks have gotten used to being poured upon by other nations' money for free [they call it fiscal waterboarding!] and when the donors want to stop, they feel as if they were robbed. If they don't like the cure by the gradual slowdown of the donated money, well, then it will be necessary to cut the umbilical cord abruptly and to let them drink the mess in its entirety.

The first ones who should be arrested are those comrades from the European Union who have allowed Greece, cheating obviously in everything and failing to fulfill pretty much a single condition, to join the eurozone; however, all of us will pay for their mistakes: the history often proceeds in this way.

They have the right to decide about their future. The Greeks have decided in the elections: to continue piling the debt, not to repay anything, to live out of the other people's money, and especially to blackmail! Whatever it costs, one should distance himself from Greece, the further, the better. No to extra aid, No to extra forgiving of the debt, and ideally, they should be expelled from the eurozone. This story will be worse for Greece than for the EU or the eurozone. Let us not allow to be blackmailed.

Haven't the Greeks hired Mr Paroubek as their financial adviser? There exist sources and the debts don't have to be repaid. :-)

I don't know why Europe is so harsh against Greeks... I would expect the old debt to be forgiven. However, that wouldn't be enough to mitigate bankruptcy which is why they would need to get new "loans". Doesn't anyone understand how much the Greeks have suffered and saved money in recent years? They no longer have the 15th and 16th salaries, the bonuses for arriving to the workplace in time, and discounts for ouzo [alcoholic beverage in the region]... :-) The Germans should understand all of this sacrifice and stop making fuss about the aid. :-)

We may finally eat sumptuously, good soldier Švejk, when others are lending to us...

The photograph of Angela Merkel with girls is completely unbalanced. What I am missing are the representatives of the Turkish, Arab, African, Albanian, Asian, and Kosovar minorities. :-)

Why do Greeks ask for money in Germany, France, and other non-communist countries? The Greeks have voted for communism and socialism. Logically, they should ask for the money among their comrades in Russia, China, North Korea etc.!

Last week, Greece and its left-wing government had a vote about the proposal to denounce the Russian attack on Mariupol.

We must ask why and who was behind that.

The Russians are looking out of it as a devil on each side.

My opinion is that Russia had an agreement with Greece that if Greece creates some problems in the EU and disintegrates their unity, it will be financially supported in the case that Greece has to leave the EU or the eurozone.

Germany won't allow modifications of the funding of Greece because that would mean the political death for Angela Merkel and she is the main exponent of the current EU policies with respect to Russia.

Russia would benefit for two reasons:

1. Europe would have enough of its own problems, thanks to Greece, and it wouldn't focus on Russia and enforcing the sanctions too much.

2. Greece is a NATO member which means that this organization's interests – organization that Russia views as a problem – would automatically be harmed as well.

At any rate, we have the proverb that when two men are arguing, the third one is laughing and we know who is the third.

And what about to start to work?

Why are you looking so stupidly? Go and find sponsors for Greece! And the money, debt write-off, and a rich husband... [a parody on a scene from the Russian TV fairy-tale Grandpa Frost]

If Ms Merkel manages to fulfill her declaration, it will only be good news.

On the other hand, I also think that the EU is treating Russia as a bad father who was pumping sweeties into his kid and then spanked the kid for its having tooth cavities. Someone has mentioned the analogy with "ours". How we educated our gypsies, that's how we have them. :-D

Is the debt burden impossible to manage? And who has accumulated the debt? And what does the new left-wing government want to do? It wants to erase the old debts so that it could create new ones. Do they think that they will be wasting money and others will pay for that? What would happen if the same thing were done by Spain, Italy,...?

Greece has de facto gone bankrupt. Every policy that is overlooking this fact is only prolonging the misery for the ordinary Greeks...

As a layman, I don't understand why should the Greek exit from the eurozone shake the euro. My common sense tells me that if I get rid of the weakest link in the chain, then I will get stronger... and it looks like Greece will have to return to the drachma.

Adolf, excuse me, Angela has apparently discovered the wheel. This is how Greece's creditors should have acted a long time ago instead of pouring new money into them as if they were pouring a hard liquor to Mr Kalousek [a former Czech finance minister]. :-)
Luboš Motl v 3:44 PM
Share