Deflategate: a view from Central Europe

Between 1972 and 1974, America was excited about Watergate. Similarly, the most important event that decides about the future of the United States in 2015 is the so-called Deflategate. In fact, Bill Nye the Science Guy has changed his occupation and began to give lectures about Deflategate rather than climate change, his previous favorite scandal that is – as he equally pointed out – approximately equally fatal as Deflategate.

During a semifinal game in a competition ("NFL") revolving around an esoteric sport named "football" although it is in no way "football" in the conventional sense, the team that I would have encountered in Greater Boston for six years, The New England Patriots (yes, if you wake me up at 3 am, I won't tell you the difference between The New England Patriots and The Boston Red Sox LOL), was found to have provided the game with underinflated balls. Well, 11 of the 12 balls had a lower pressure.

(Incidentally, Czechia is excited about low pressure these days, too: the pressure dropped to 970 kPa, close to the February 1989 record of 967 kPa.)

Because their January 18th, 2015 defeat of the Indianapolis Colts, 45-to-7, was apparently a statistical tie that could very well have ended up differently, people keep on repeating questions such as: Were the balls underinflated deliberately, to help the Patriots? Was it just negligence? Did the underinflation result from a low temperature or high humidity? And so on.

I find the spectrum of these questions to be ludicrous.


First, let me mention a few basic facts related to physics that are usually being said in this context. But I have never read the actual answers so what follows is my independent calculation that may suffer from some mistakes (or, on the contrary, that may fix mistakes that are being made by others).

NFL demands the pressure inside the balls to be between 12.5 and 13.5 PSI. America uses medieval units and pressure is no exception. PSI stands for "pound per squared inch" and it is defined the "terrestrial weight of one ancient Roman metallic balance with some post-Christ mass bonus per the area surrounded by four bloody fingers cut from an adult thief of potatoes".


Because some readers may have a hard time to locate all the historical facts, let me mention that 1 PSI is about 0.068 atmospheres or 6.9 kPa; conversely, one atmosphere is about 14.7 PSI. OK, it means that the extra pressure in the ball should be between 0.85 and 0.92 atmospheres. Instead, the pressure was found to be 11 PSI. In order to be compatible with the U.S. conventions, let us use the PSI unit.

The minimum allowed pressure was 12.5 PSI but the actual pressure was 11 PSI. It is about 10% lower. Can you reduce the pressure in the ball by lowering the temperature? You bet. The air (or whatever was inside) is approximately an ideal gas. And they obey \(pV=nRT\). At a fixed volume \(V\), the pressure \(p\) is directly proportional to the temperature in kelvins, \(T\). 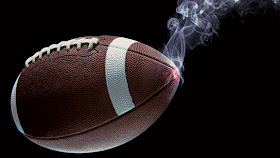 I hope that NASA and Boeing have already learned how to produce a more accurate sphere. ;-)

However, the actual total pressure inside the ball actually wasn't around 0.85-0.92 atmospheres. It's the extra pressure relatively to the environment. So the total pressure in the ball is supposed to be between 1.85 and 1.92 atmospheres, more than twice as much. For this reason, what we need to reduce the (extra) pressure from 12.5 to 11 PSI isn't a 10% decrease of \(T\) but rather (slightly less than) a 5% decrease of \(T\), i.e. something around (less than) 15 °C. Of course it's totally plausible that the pressure was set at a place that was 15 °C warmer than the playground so that the cooling would lead to this deflation.

Great. These are some technicalities.

But my major points – which, as far as I can see, are not being voiced in the U.S. at all – are not quite physics points.

Second, I am convinced that most of the sensible Europeans must be stunned by the same point: Even if the pressure was too low and if it were providing some players (those catching a ball etc.) with an advantage and some players with a disadvantage, both teams should be affected pretty much equally, shouldn't they?

You know, in Europe, some people are playing the real football – "soccer", if you wish – and the weather may be freezing. There stadium may be full of mud or something like that. But those things don't matter much because they affect both teams equally. The weather may be hard but the game is still fair.

Here, we are being assured that if the balls had not been underinflated, the 45-to-7 victory of the New Patriots could have become a loss. Wow. If that's the case, then it is a pretty damning verdict about the American football as a game. If the chance to revert this overwhelmingly clear result by a lower pressure is truly significant, the victory is pretty much decided by the pressure of the footballs!

And if the final score isn't this random or dependent on irrelevant physical quantities, than a team that won 45-to-7 should almost certainly win again when the game is ordered to be repeated, right? So if the game makes sense, the probability that such a thing could matter for the results of the league is tiny.

Just think about it rationally. The people who say that the lower pressure mattered effectively say that the score is a function of the pressure. At 11 PSI, we get 45-to-7 for the New Patriots. At 12.5 PSI which is allowed, the Colts would win. So 1.5 PSI is enough to turn the clear score upside down. If that's so, then obviously 1 PSI – the width of the tolerated window for the pressure, 12.5-13.5 PSI – greatly matters, too.

If it matters in the direction that the critics of the New Patriot promote, then it is very clear that the home team always wants the pressure to be as low as possible, at 12.5 PSI, while the visiting team should do everything it can to make the pressure 13.5 PSI, the maximum allowed value.

As you must have figured out (and you probably knew it long before you were reading this blog post), I don't give an infinitesimal damn who should win. Patriots or Colts, what's the difference? True patriots wear colts, anyway. But what I do care about slightly more is the question whether the American football is a sensible game at all, and the very existence of this Deflategate is rather strong evidence that it is not a sensible sport. Millions of viewers find it plausible that the final score of a match is pretty much all about the pressure of the footballs! That's too bad if it is true. Is it true? An experimental investigation could settle this question. But even before it does, I think it's crazy that so many people may believe that 1.5 PSI in the football is so fatal for the result of every match – and they still care about the results!

Why would a sensible person care which team was able to inflate the balls at the lowest pressure?

Why isn't this meta-point discussed at all? I think that the reason is that the very suggestion that the American football could be a stupid and non-meritocratic game is being viewed as a blasphemy by almost all Americans, isn't it?
Luboš Motl v 6:37 PM
Share