Do sunspots during pregnancy shorten baby's life by 5 years?

The Huffington Post, SciAm, and others bring our attention to a new spooky Norwegian paper

The number of sunspots is approximately changing in 11-year-long cycles. They seem to believe that the solar maxima increase the amount of ultraviolet radiation – and that's known to inhibit some vital cellular processes. But you wouldn't believe that the sunspots should significantly affect the life expectancy, would you?

Contradicting several similar surveys in the past that ended with the negative result, these three folks claim that the effect of the solar maxima on the life expectancy (and women's fertility) exists and is rather large. Most shockingly, the babies born during solar maxima are claimed to have lives shorter by 5.2 years than those born during the solar minima. The barchart above says that the probability of dying before the adulthood is about 3 percentage points higher for the babies from the solar maxima.


This is such a large difference that I believe that it should be significantly higher than the noise expected from the respective groups. But when it comes to this most important conclusion about the life expectancy, I don't see any clear information about the statistical significance in the paper. So I guess that I am not the only one who will remain deeply uncertain about our belief in their conclusion.


One may imagine various mechanisms by which the solar activity could affect the life expectancy and other quantities. But despite this fact, I admit that the hugeness of this effect is surprising for me. If that conclusion is true, it almost looks like a vindication for the "astrological" way of thinking and one may say that your birth near the solar maximum is more harmful for you than life-long smoking! 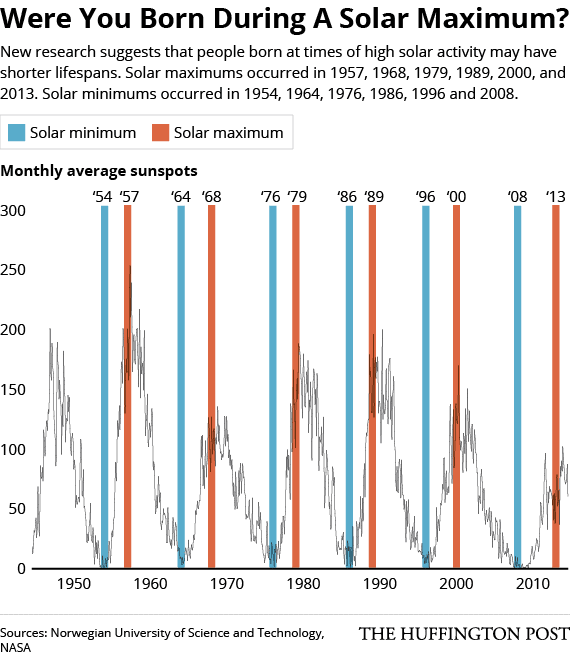 Also, if you want a longer life for your baby, it may be ideal to wait to 2019 or so – an expected solar minimum. But the recent solar maximum in 2013 was rather weak so it may cut less than 5 years from the babies' lives.

Do you believe the claims? Will it affect your behavior (including the usage of contraceptives) or your anxiety? ;-)
Luboš Motl v 1:53 PM
Share