Pilsen: it's no easy task to install new bells

If you need to install new bells to the St Bartholomew's Cathedral, it is harder than to overwrite a few MP3 files by new ones.

The logo has been optimized for those artists who haven't quite learned the digit "5" yet. It's replaced by a more intuitive character.

You need the new physical bells (I was actually there also when the bells – paid for by private sponsors – were installed to the cathedral some month or two ago), a son of film director Miloš Forman (named Petr) as the director of the show, you need lots of big LCD displays, projectors for a monstrous videomapping on Czechia's largest near-square-shaped square and Czechia's tallest church tower, a Swiss ropewalker, a huge mechanical robotic angel controlled by about 6 puppet masters, several bands and dozens of weird dancers and musicians, and about 50,000 people (not a strict subset of Pilsen's 170,000 inhabitants) who watch it.

You will only enjoy this 100-minute show if you click at the "full screen" in the right lower corner and increase the brightness and contrast of your display.

I was there – and the show that kickstarted Pilsen's role as the 2015 European capital of culture was more impressive than what I expected.


What do I mean by the show's being conservative? It didn't forget to recall – at least I saw it inside – that Pilsen was a conservative Catholic stronghold that resisted the attacks of the Czech early 15th century protestants, communists, and terrorists called Hussites. (Yes, all protestants, left-wingers, and terrorists should realize that their pet movements are obsolete – they were an issue in my hometown about 600 years ago.)


There were references to the glorious years around 1900, the wars, Nazi marches during occupation, the happiness during the liberation by the U.S. army. Something was gradually getting wrong between 1945 and 1948 ;-) and the videomapping nicely showed what the city looked like during Prague Spring 1968 (plus the occupation by the Warsaw Pact) and during communism in general. Milouš Jakeš, the last major boss of the communist party, gave a famous funny speech in a Pilsner Kolhkoz 2 miles from my home in July 1989 (which I nearly memorized at that time and still remember) and his words about the lists of artists and their salaries etc. was played during the show tonight, too.

Some famous historical personalities connected with Pilsner culture and industry – Skupa and his Hurvínek puppet, Jiří Trnka, Czech Edison František Křižík who operated here, and so on – weren't forgotten. Some old, not-quite-musical songs were sung by Jiří Suchý who was born in Pilsen in 1931 and whose best era was probably in the 1960s. It's pretty good if you remain a top entertainer during the ceremony kickstarting the European Culture Capital even though your glorious years were half a century ago. ;-)

There are lots of bands that originated in Pilsen, such as Mandrage that was playing at the end.

I don't want to go into details here because I think that all these issues about the Czech culture are completely obscure for much more than 99 percent of TRF readers.

Some people say that those few dozens of millions of dollars for such events are wasted money. I disagree with that. I think that this is an example of a sensible spending. This should be contrasted with the lawsuit by Amadeus, a company that wanted to build a new multi-purpose mall at the American Avenue. A referendum initiated by the green bastards killed that project – although it only barely won. And not surprisingly, Amadeus is now suing Pilsen and demanding CZK 1.8 billion – much more money than the whole cost of the 2015 European Capital of Culture events.

This referendum was among the best examples of wasted money, the government's terror against the private subjects and its lack of financial responsibility. The brainwashed people who voted to "ban the project" still have the thinking from communism in which the government has the absolute power and they thought that they "are" the government. But the government only has the power derived from the people it represents. Brainwashed citizens of Pilsen may force their representatives to behave as unconstructive jerks – but the city may still easily lose huge lawsuits and all of us will pay for it. Note that the annual budget of Pilsen is about CZK 5 billion so the lawsuit is about 4-5 months of Pilsen's budget. 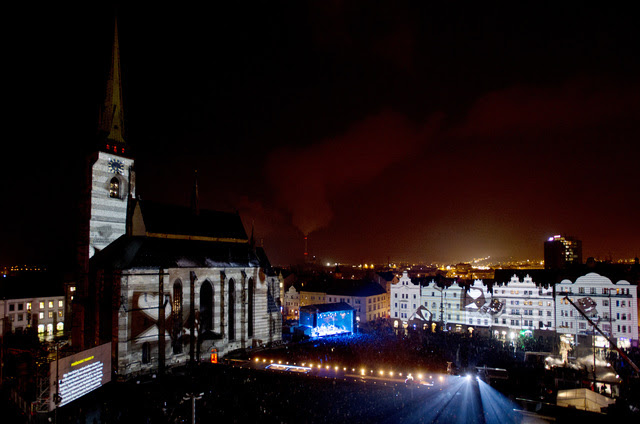 I would prefer Pilsen to allow wealthy commercial subjects to allow the city to (financially and otherwise) grow – so that pretty soon, the city will have enough money to be the Cultural Capital of the Universe and Adjacent Territories forever.