Climate apparently jumped to a warmer basin of attraction in 1998, noise ever since

One month ago, I discussed the ranking of the global mean temperature in 2014 according to the UAH, RSS AMSU satellite datasets. The December 2014 figures weren't out yet but it turns out that my system of predictions always works very well and the ranking of the years may be more or less predicted before the last month is known.

RSS claims that 2014 was a whopping 0.3 °C cooler than 1998. Please laugh out loud when someone will be telling you that it was the warmest year.


Amusingly enough, the RSS AMSU data are now available exactly from full 36 years since 1979 through 2014 (the difference between these two years is 35 which means that there are 36 years because the initial one is the extra "zero", and I hope that most of you have noticed this "anomaly by one" in the kindergarten, too). And because 36 is a nice composite number, I decided it was a fun enough idea to show the graphs (well, barcharts) for various periods whose length is a divisor of 36 years.


OK, here are the monthly data: 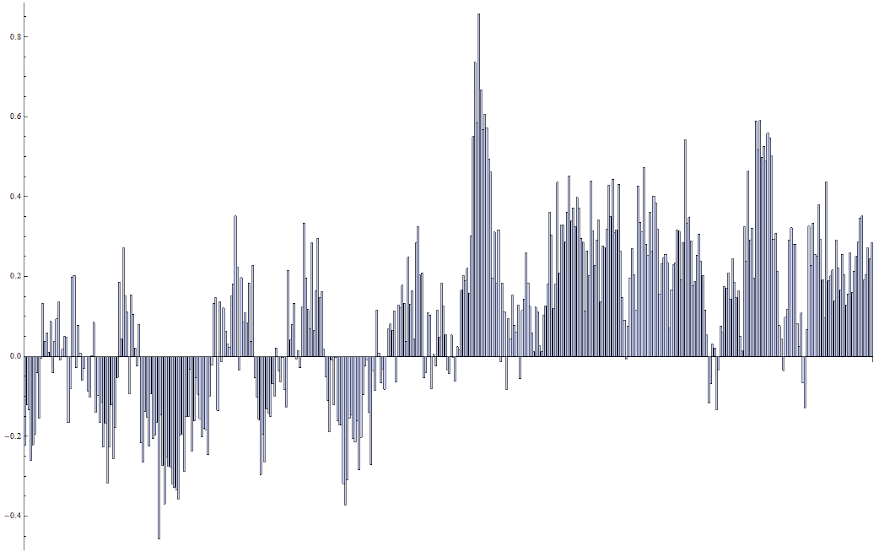 Click to zoom in. You see that it's some noise and one may still agree with Fred Singer that a more refined description is "one kind of noise" up to 1998 which was a warm year when the climate jumped into another basin, and the climate has resembled some warmer noise ever since. The climate apparently likes to do such things, stupid. 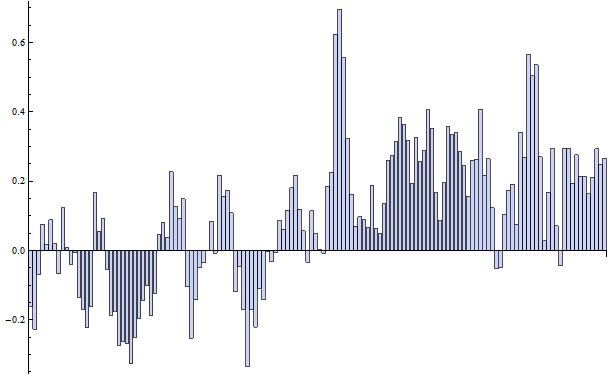 The quarters, three-month periods look like this. The frequency is still very high. Like on the previous graph, you may see that the recent quarters don't deviate from the "average ones" in the post-1998 period. 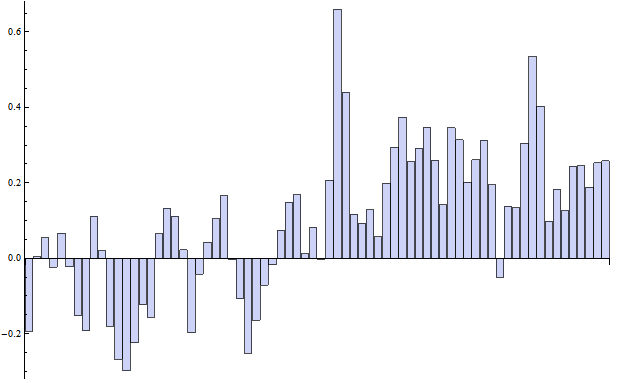 And these are half-years, six-month periods. As you can see, it's still a lot of noise and the redundant sentence you are just reading and the following one that you will be reading in 7 seconds was inserted into my blog post in order to separate the previous picture from the following one, the annual barchart. Even though it's just spam, I hope that I inserted it in such a form that was entertaining for you, despite the fact that you have just wasted 11 seconds of your life with this paragraph.

Yup, I have produced more spam than I needed! ;-) 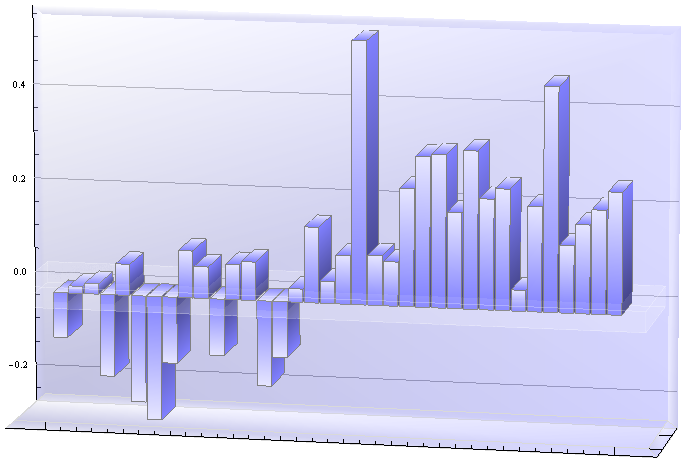 Finally, these are the one-year, twelve-month periods. Because I recently received a significant financial gift from a TRF reader (thank you very much again), I decided it was appropriate to replace the BarChart command in Mathematica by BarChart3D. ;-) The years 2007 and 2014 are tied on the 6th-7th place among the 36 years. It's warmer than the average of the 36 years but almost exactly equal to the post-1998 average. 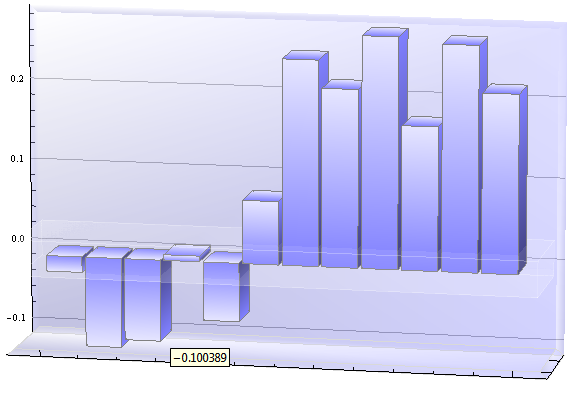 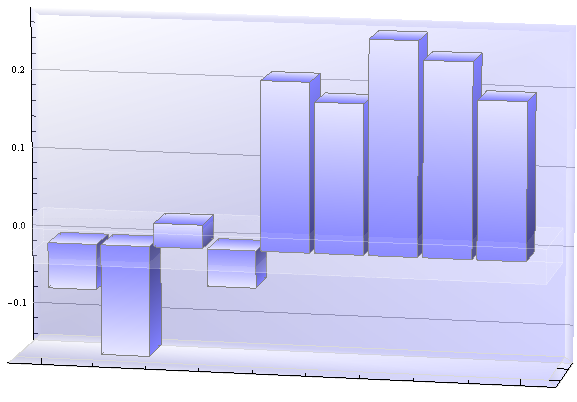 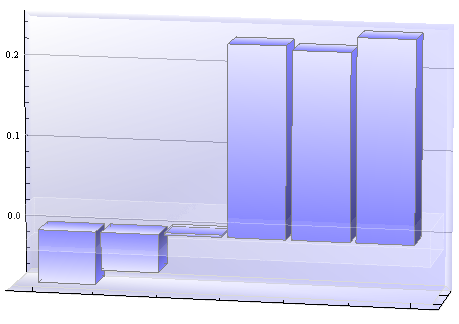 Here are the 4 nine-year periods. Again, you may see the jump around 1998. However, there's one more interesting thing I want to mention here. You often hear that the most recent decade was the warmest one. Well, if you look at "almost decades", the 9-year periods, the most recent 9-year period was actually cooler than the previous one.

I won't post the excessively simple picture of the 2 eighteen-year periods. The first period had –0.04 °C, the second one had +0.24 °C which looks like warming by +0.28 °C per 18 years which translates to +0.155 °C per decade. Note that the warming trends I obtain in various ways don't exactly match and they have no reason to be exactly equal because the months and years are clumped differently – assigned to different "representative moments".

At any rate, you see that no trend-like change has been taking place in the more recent half of the 36-year-long satellite era.

Today, it was happily announced that NASA's GISS and NOAA's NCDC show that 2014 was their warmest year. The "advantage" of NCDC is that the warming up to 2014 looks higher than in GISS where 2014 was about 0.02 °C warmer than their 2nd and 3rd years, 2010 and 2005. The heat is on, we read everywhere. We are literally frying the Earth, and so on. 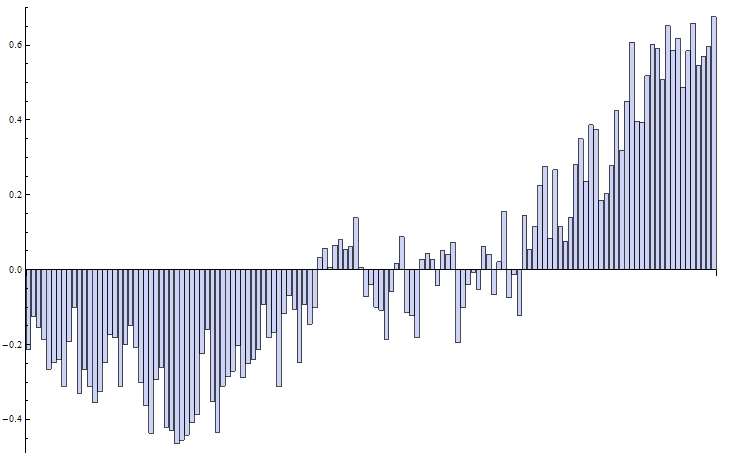 You see the GISS temperatures from 1880 to 2014 above. I drew it from the GISS dataset via Mathematica. Note that the warming trend seems rather clear in the barchart above but the warming trend between 1900 and 1940 was about the same as the overhyped trend in the recent 40 years – even though the CO2 emissions were about 3.5 times lower then.

Because the satellites show that 2014 was about 0.3 °C cooler than the warmest year, 1998, and it seems to be the warmest one according to the weather-station-based NCDC and GISS, you might interpret it by saying that the global mean temperature is only measured with a huge mistake – and the error of 0.3 °C is rather common. From this viewpoint, you could then argue that the temperature has been constant for 30 or so years within the error margin.

Alternatively, you may argue that either the satellite data are wrong; or, more likely, the surface record is wrong (or manipulated). All these things are possible.

However, I would recommend a different take. These "global warming temperatures" are basically OK but they simply show the evolution of slightly different quantities. There is no "canonical" global mean temperature. It is a rough notion and there are many ways how to clarify the detailed questions what this quantity should denote and how it should be measured. And they simply disagree. They substantially disagree. Their estimated global temperature anomalies differ nearly by 1/2 of the declared "20th century global warming". None of them is much more important than its competitors.

My real point is that it is irrational to imagine that the global mean temperature – or, more sensibly, "a global mean temperature" – hides some important wisdom or you should look at it carefully at all. There is nothing important about this quantity. From a practical viewpoint, it's been constant in the recent century. The change has been smaller than what you could detect by your skin even if you were able to feel the globe directly (we can only do it by a careful averaging of many measurements) and even if you could accelerate the century to a minute.

If you care which datasets are better, anyway, I would say the following. The surface record is probably more relevant for the "place where the people live". We live near the surface, indeed, and not several kilometers above the surface. If you live in America or at the Bahamas, you may still prefer the U.S. or Caribbean data and not the global average that incorporates lots of irrelevant places.

However, perhaps more importantly, it's the lower troposphere as measured by the satellites that should show a stronger warming signal if it were caused by the increasing CO2 concentration and the expected positive feedbacks that amplify the greenhouse effect. Because the satellites seem to show that this warming rate of the troposphere is extremely slow, it is the most accurate measurement of the CO2-related greenhouse warming. And according to the data, the higher near-surface warming trend is probably unrelated to CO2.

A special blog post is dedicated to the fact that GISS, NCDC only show the differences between warmest years that are comparable to the error margin, and this actually implies that 2014 was probably not their warmest year (the calculable probability is below 50%) although they made the media to claim otherwise.
Luboš Motl v 8:35 AM
Share