There is nothing extreme about anti-Islam groups

When the Western societies became secular, religion was largely downgraded to a personal spiritual issue of every individual that only affects his or her own decisions and not the lives of others, at least not directly. Christianity turned out to be capable of this transformation.

This is not the case of Islam which keeps its very strong "political Islam" branch and wants to dictate how people should live, what they cannot do, what they cannot say or draw, what they learn about everything, who cannot win in the court, and who has to be stoned to death.


Germany has seen the rise of PEGIDA, the Patriotic Europeans Against [Gegen] the Islamization of [Des] Occident [Abendland: the West]. These folks will show some courage if they participate at the rallies again because the Islamic terrorists are threatening terrorist attacks against those rallies – and against the train stations in Berlin and Dresden.


In Czechia, such official rallies are most likely to be organized by IVČRN.CZ (We don't want Islam in the Czech Republic) movement. Yesterday, Prague saw about 1,000 attending their rally near the gates of the Prague Castle. About 5,000 registered to "attend" via Facebook etc. but I guess that most of those only meant the registration as a "like".

Next to the ordered 1,000 citizens, there were about 25 anti-demonstrators, largely from a fringe non-parliamentary group called the Green Party. Yes, it surely helps that "green" is the traditional color of Islam.

The rally was attended by some members of the Parliament and mayors of parts of Prague, and so on. Some of the most prominent folks who participated may impress you with their racially clean Czech names such as Tomio Okamura, Marc Nigger, and Jane Nigger (the latter two are not relatives). ;-)

Only 10,000 Muslims – 0.1% – and almost certainly less than 20,000 people live in Czechia. (IVČRN.cz claims approximately the same number of members.) Still, the speakers agreed that the country can't ignore the problem or behave as "sunny people" who have reconciled themselves with Islam. The anti-Islamic movement must be supported and become mainstream. Well, lots of recent data show that the views of IVČRN.cz surely are mainstream here. Among similar numbers, 87% of Czechs want tougher immigration rules for Islamic applicants.

Another member of the Parliament, Olga Havlová, talked about the halal policies. See her blog post here. The animals are losing their blood for minutes while conscious. Maybe it's not so terrible for the animals themselves but I just find it horrifying. I don't want the cruel education of children shown by the video above to spread in my country. Since a very low age, children are being reeducated from little angels to insensitive killers. 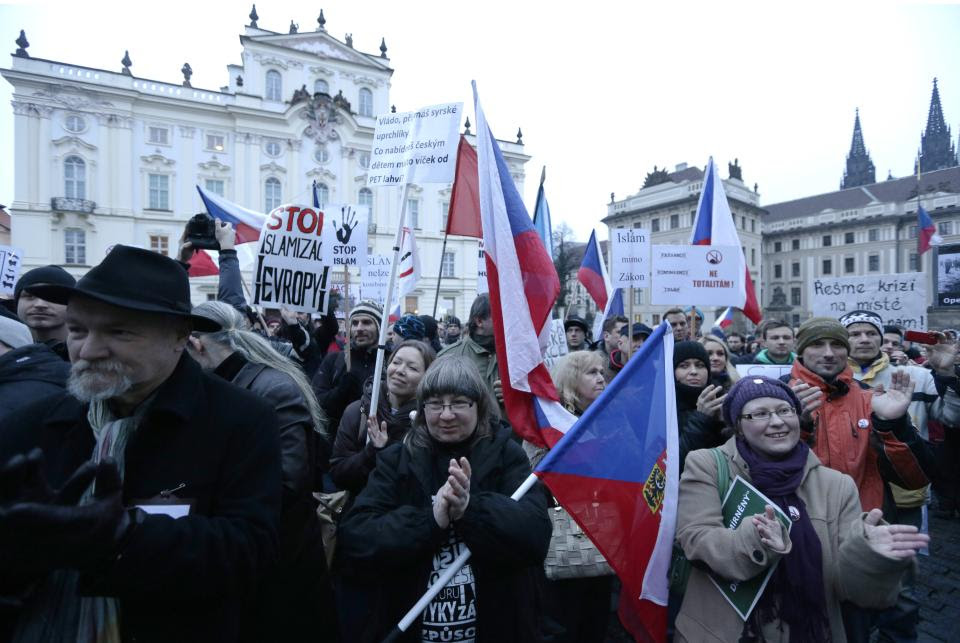 Some speakers complained that the Kurds who are fighting the Islamic State receive very little support and virtually no space in the media.

You may imagine which of these things were making the 25 greens (plus overdressed ladies in Persia's official TV station) upset. But my main point is that such an open discussion about Islam – and open and staunch disagreement with Islam – must be allowed as long as the belief in Islam itself is legal. They are just two sides of a rather important political and/or spiritual confrontation and to say the least, a free and democratic country simply can't put the interests or special rights of the Muslim believers above those who despise Islam.

I think it's great – so far? – that Czechia enjoys genuine freedom in these matters. Not quite like his predecessor but "almost" in the same way, the current president Zeman is also a powerful wall against the incorporation of various parts of degenerative group think. He is a vocal critic of the Islamic Anticivilization, of course.

But even when it comes to different topics, he fights against the establishment of new taboos. For example, a few days ago, he said that it was wrong to integrate handicapped children to normal schools and among healthy children in general – because such co-existence is a tragedy for both sides. I have mixed opinions about this sensitive matter so I am not sure whether I agree with his opinion. And be sure that he was instantly criticized by some of the usual suspects, NGOs, the PC crusaders. However, I surely do feel bullied by the dogma spread by a certain kind of people (along with hundreds of similar dogmas) that segregation is always a cruel criminal act. I surely think that segregation often has rather good reasons to be introduced – reasons that are often beneficial for both sides – and these reasons can't be overlooked. So I am grateful to Zeman that he makes it possible for a true debate about these and other issues to continue instead of everyone's being bullied by the "only politically correct opinion a decent person is allowed to have".

There are lots of random social and political questions like that which aren't directly linked to the most standard political topics but where Zeman consistently pushes the discourse in the right direction that I have no doubt it was right that we elected him as Klaus' successor.
Luboš Motl v 8:31 PM
Share