For more than four decades, the Greeks disrespected all the basic principles of common sense and sane economic policies. For many years, it has been clear that they have ruined their nation and devoured their future and by helping them to sustain life resembling what they knew when their living standards peaked, one is only delaying the inevitable and does it for increasing costs while making the inevitably coming hard landing even harder.

Ten days ago, Greece has elected an über-Marxist bunch of loons. For a formerly capitalist nation, this injury is incompatible with life. Tsipras and his comrades have promised to spit on everything that Samaras established (and it was far from sufficient), on their debt, on the present creditors, and on the future creditors, too. Instead, they would propose totally unacceptable "solutions". They rejected everything that made sense and everything they promised was and is insane. And they started to behave arrogantly towards all of those who allowed Greece to live as a wealthy nation for so many years and those who are and will be essential to avoid a humanitarian catastrophe in Greece: especially on Germany but also on the "troika" of ECB, IMF, and the officials from Brussels.

Clearly, there is no genuine room for negotiations here. In the past, the rules have already been distorted too much and a new distortion is either unacceptable or so small that it makes no sense to spend time with it. Germany has apparently prepared a document for the weekend that demands that Syriza ditches every single promise it has made and it obeys all the agreed upon rules. One should emphasize that by adopting the communist policies, Greece isn't just crippling conditions for a future aid. It is also violating conditions for aid and bailouts that have already been decided and distributed in the past (especially in 2010 and 2012).


Last night, the European Central Bank (ECB) finally started to enforce some rules. According to the high-tier rules, it cannot accept junk as a collateral when it lends to commercial banks in the eurozone. And because Syriza openly declares that it didn't want to repay the debt, the bonds are obviously junk not just according to the ratings. One of the four anomalous veins through which cash continues to flow to Greece was cut.


There has been a crazy exception for a long time – the junkiest junk among all the junks, the Greek government bonds, could have been used as a collateral for the ECB loans to Greek commercial banks (which badly need it, due to the obvious run on banks). Finally, this exception was eliminated. The vote needed votes from the whole eurozone – showing that the opposition to the arrogant Greek behavior is rather universal. (Thankfully, Italy's PM Renzi who was ambiguous in recent days supported the move, too. To compare, insanely enough, an Adam Smith Institute fellow endorsed Varoufuckis' "creative" bond swap.) It was done almost silently, without much fanfare and without previous warnings. And it makes sense. It should have been obvious to everyone that the principles of sound banking, explicit laws, and common sense were being suppressed and a fix could have come at every moment.

It doesn't mean that the Greek commercial banks will immediately collapse. They may still be held above the water by the Greek central bank which may still get some cash from the ECB, using a different channel (Emergency lending program), but the interest rates are higher and the ECB is expected to supervise the transfer more closely than it did when the junk was used as a collateral. I think that in this way, the ECB is consolidating the debt – all the "junk things" will be concentrated at the Greek national level – which is a good way to get ready for the actual default event.

When the ECB removed the exceptions, the yields on 10-year debt returned from 9.5% above 10%. The Marxist Führers immediately flooded the banks with €10 billion of cash, saying that they will not be blackmailed. Indeed, they won't be blackmailed but let's hope that this economy will finally be killed without unnecessary words. Once again, Tsipras promised the eternal end to austerity ;-) – he will clearly keep his arrogance up to the very moment when voters will have to eat his flesh – while Varoufuckis didn't even agree whether they agreed to disagree with Schäuble.

Those who want to become chairs of ECB should train playing this game. Use cursor keys.

The ECB may do some additional steps and as far as I understand, by (finally) enforcing other rules, it may speed up the default event so that the event could occur before the first "obvious" possible moment which comes at the end of February.

While John Kerry was arriving to FSU (Failed State of Ukraine) for a visit, the Ukrainian central bank has revealed that its regular intervention that kept the hryvnia near 16-18 hryvnias per dollar are no longer possible. The hryvnia instantly dropped to 24.5 per dollar (25 per dollar a few hours later), so it's finally slightly "weaker" than the Czech crown. ;-) Just to be sure, the overall normalization of currencies doesn't have any "real" implications. The rate hike from 14% to 19.5% didn't help.

Despite huge losses on both sides (including most tanks of the Novorussian Armed Forces), the cauldron (encirclement) trapping the 7,000+ Ukrainian troops in Delbatsevo seems to be complete. If that's the case, they have ammunition for 24 hours or so. Vuhlehirsk near Debaltsevo has already been taken by Novorussia. What is trapped is an important and skillful part of the Kiev army so if it has to be neutralized (which would be 5% of the German losses in the Battle of Stalingrad cauldron), it could be a problem for the very survival of the Kiev regime.

Hollande and Merkel want to visit Kiev today and Moscow tomorrow. If they don't offer something significant to Novorussia – and to Russia, for that matter – I guess that no mercy will be found. In that case, the question whether Kiev belongs to Ukraine or Novorussia could soon become questionable. Moreover, the U.S. haven't paid a penny to help the Ukrainian economy or stabilize its currency but it's thinking about sending lethal weapons to Kiev. Sorry but if you do so, it will make complete sense for Moscow to invade and reabsorb Ukraine. If you will misunderstood even that reaction, it may be time for nukes in D.C., too.

An extra comment. We are bombarded by texts (and the Greek voters were even more often bombarded by speeches) that use the word "austerity", usually in a negative sense. In most cases, this word has been used and is still being used in a totally demagogic way. We hear that "austerity increased the number of suicides". We are told that "the new government wants to end austerity". But all of these sentences are completely nonsensical.

What actually caused the slight increase in suicides wasn't austerity but "bankruptcy and poverty". And as you know, "poverty" can't be ended by a simple decision or a vote. When the word "austerity" is being used correctly, "austerity" refers to a living style that is materially modest and this modesty was either "artificially imposed from above" or it is "temporary" or both. "Austerity" is supposed to be a downward deviation from the normal. But none of these circumstances applies to the Greek situation.

Greeks are simply broke and their poverty is the normal. Samaras' years that were referred to as "austerity" were in no way a downward deviation. They were some of the richest years of Greece in the 21st century, as everyone will see. The "default situation" of all human beings is poverty. People are being born with bare buttocks. The mankind has created and accumulated wealth but a functioning trade and capitalism that had to be in place for a long enough time, along with some additional conditions, were needed for the poverty to change to wealthy life. 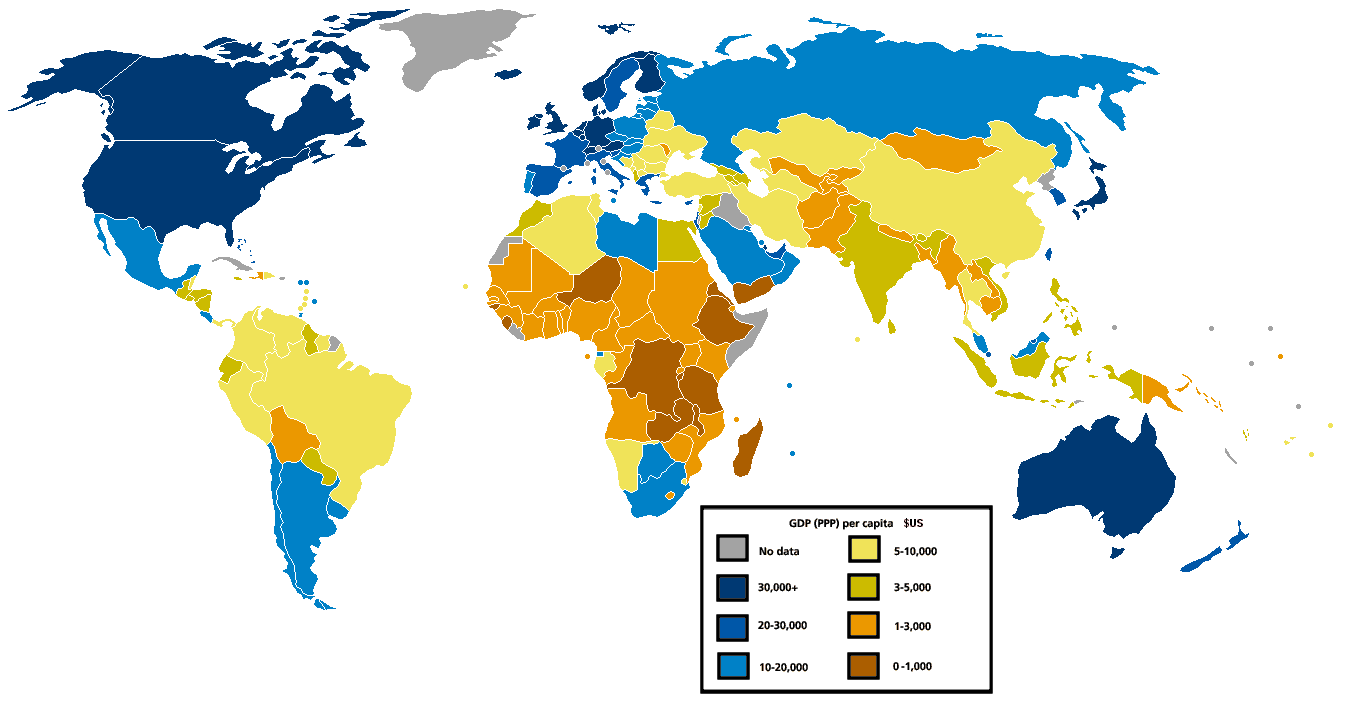 Most people and most countries in the world live in relative poverty – mostly yellow/orange/red color – which this map defines as GDP below $10,000 a year per capita. They're the "original nations" and "original members of the homo sapiens species". It's the richer, mostly blue nations that are upward fluctuations, something "unnatural" or something that was "artificially created".

Communist demagogues love to take wealth for granted. Adam and Eve have lived in a luxurious castle and it was some evil people – probably capitalists – who stole this infinite wealth from them or their descendants and who imposed austerity on their lives. But the truth is exactly the opposite. Adam and Eve didn't have anything nontrivial and it was mostly the capitalists who built the world where people may be wealthy.

The possibly looming full Greek default and related developments will mean nothing more than the change of Greece on the map above from "blue" to "yellow". It's not a big deal; most countries surrounding Greece on the map are yellow, after all. Most of the time, nations tend to get richer but that's also correlated with their increasing understanding of the importance of free trade, financial accountability, enforcement of laws and contracts, protection of owners and employers, and other important aspects of a functioning capitalist society. Greece has voluntarily chosen to walk in the opposite direction – increasing legal support for those who live out of work of others. It was done both at the national level and the international level: Greece as a whole became a company that lived out of work of others. And such mistakes do have consequences.

It would be better for the rest of Europe if Greece dropped not just to the yellow but to the orange or red category. The modest yellow color could still be enough for Syriza-like infections in other countries (like Podemos in Spain) to get way too many votes. This far left-wing pandemics has to be stopped, otherwise the centuries of prosperity of the modern type – and this prosperity was "invented" in Europe – will end on the European continent rather soon. Similar communist revolutions could turn out to be a much more urgent threat for the Old Continent than Islamization and other things.

A fun story – good heart is great but some compensation for that is good, too

On Thursday noon, I was returning from bureaucratic offices – annual tax returns (which I was obliged to file electronically) plus health insurance and pension insurance annual forms (on paper): it has never been so fast. When I was returning home, I found car keys – from a rather expensive but not too expensive car. They worked. ;-) So I decided the owner had to be living in the nearby family house – the keys were really in front of the door, kind of. The owner, between 60 and 70 years, I guess, agreed it was him, when I rang the bell. I waited for a few minutes.

When he came to see me, for a minute, I insisted that it was my duty and I deserved nothing for that. But at the end, I did accept the half a liter bottle of Fernet Stock as a compensation. :-) The probability could have been 30% that the keys would be stolen – even I had the temptation to give it to police – and perhaps 5% that the car would be stolen as a result. So the bottle is a very cheap way to get out of this trouble. You know, I am among the most likely people who would consistently do such things for free. But at the end, if the people who help others are never compensated in any way, they ultimately stop doing good things, too. I hope that you understand why this seemingly off-topic story with this message appears in the blog post about Greece.
Luboš Motl v 8:29 AM
Share