What do I mean by these three results?
Well, the three guys were ethnic German (let's ignore the Jewish blood of the last one) but some of my ancestors would work as maids for similar folks so I am eager to take the credit. 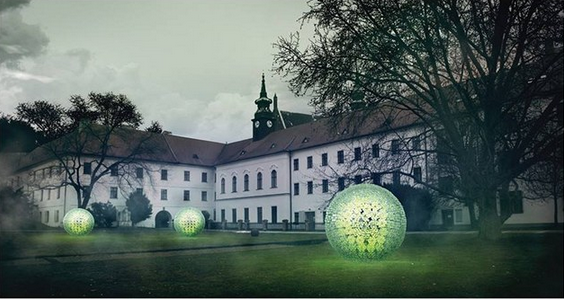 Pulihrášek [The Pintopea], one of the modern applications of Mendel's research. This species created by Ms Natalie Chalcarzová a Mr Václav Kocián in Brno is pea crossed with lots of beer pints on the surface, with a cannon-ball, and a LED light bulb.

In 1843, the Augustinian convent in Brno, Moravia got a nice boost, the 21-year-old Silesian German student Johann Mendel. "The applicant seems ready for exact research in the natural scientific direction," the recommendation from his physics instructor in Olomouc read. After four years of incubation as a newbie, he adopted the religious name Gregor.


Cyril Napp ordered Gregor to study the inheritance of properties of vine, fruit, and other plants. Moravia (the Eastern 40% of the Czech lands, Czechia minus Bohemia) along with Britain were the breeding headquarters of the planet at that time.

This article is based on František Houdek's text.


He was motivated by some known observations that when bred artificially, new generations of plants may restore some seemingly disappeared features – like colors. He chose peas for his experiments because their features seemed well-defined and because excess seeds could have been used by the cooks at the convent.

He began his experiments in 1855, on his 7 × 35 meter large garden, by dividing the peas into 7 pure lines. Over the years, 30,000+ plants of 30+ subspecies were grown and looked at. He would observe 7 variables, from the color and shape of the seeds to the length of the stem. Let's discuss this length as an example. He picked the tall and short peas and "castrated" the short peas. In that way, he was sure that the "father" of Generation 1 would be the tall pea (from Generation 0), and the "mother" would be the short one (from Generation 0). Self-pollination and pollination by other plants was prevented by extra arrangements.

Gregor was a trained physics student and his idea was that the height of the plant was being determined by an elementary particle, an "element of heredity", now called a "gene". He prepared another generation, Generation 2, by self-pollination. Will this generation be tall, or short? Each plant has 2 elements of heredity deciding about the height. One of them (the dominant allele) has to win when they disagree. It happens to be the "tall one". The other one (the recessive allele, the "short one" in this case) loses.

So Gregor predicted that the probability would be 1/4 for a Generation 2 plant to be short – because it only happens if both of its "elements of heredity" are short. He made the experiment and it worked. The results of his decade-long research (1855-1865) were first presented on February 8th, 1865, in Brno, in a natural science club where he was a member. It was followed by another lecture on March 8th, 40 years before it became the International Women's Day.

His result is critical for biology but it took time before this fact was appreciated. For a long time, people thought that Mendel's greatest achievement was that he discovered and hired a great Czech musician named Leoš Janáček [Leh-awsh Yannah-Czech, or whatever is the American spelling LOL]. However, in 1900, some other four researchers did related research and found Mendel's older article. They greatly popularized it and there was no longer any doubt about the importance of Mendel's findings.

While the discovery belongs to biology, you can't overlook the physics-based logic of his research. It was the kind of science one can be proud of – which contains a rather sophisticated theory "guessed" at the beginning and experiments establishing it at the end. I already mentioned that Mendel was thinking about genes as if the were elementary particles. He called heredity "particulate inheritance". Of course, we know that they are not elementary in any sense. Genes are pretty long sequences of bases in DNA, the smallest units of DNA that make some sense. But his picture of "particles" already suggested some microscopic explanation that would be found after DNA was discovered. Even though his laws could have been viewed as purely phenomenological ones, he was actually thinking well beyond them.

One may also say that in the late 19th century, biologists were more thrilled by Darwin's theory which is of course a vital "general framework" but it ignores the "details" about heredity – to what extent the offspring is similar and how it works. Don't get me wrong, Darwin's findings are more important than Mendel's, but their "advantage" is smaller than it looked in the late 19th century.

Another thing to notice is that his laws were probabilistic laws. He was really measuring the probability that a pea would have a certain property. I would argue that folks like Mendel would have no problem with the important idea of modern physics that the fundamental laws are intrinsically probabilistic, like quantum mechanics teaches us.

Mendel got much more physics training than just the ordinary classes in Olomouc. While in Vienna around 1851, his physics teacher was Christian Doppler.

For a few more TRF comments on Mendel, see the end of this post or others.
Luboš Motl v 9:54 AM
Share