There are lots of events related to these four countries, among others, and each of them would deserve long essays. But briefly:

The European Central Bank and the Eurogroup – the set of the finance ministers of the eurozone member states – gave two ultimatums to Greece. By Wednesday, they have to present their own alternative solution of the debt problem if they want it to be considered. By Monday which is 8 days away, they have to apply for the extension of the usual Greek-Troika procedures that have worked for years.

The new Greek government refuses to continue – it was like a cure of a drug addict, they say. Troika must evaporate and their bailout scheme must be stopped. The help used to come with lots of strings and just like assorted Šhmoits and Horgans, the Syriza folks don't like strings. So they just want a lethal amount of drugs – or money – with no strings attached, it seems. You know, it's hard to cure a drug addict (or a subsidy-addicted nation) but I assure you that the slow and difficult gradual treatment is probably better than all the alternatives – at least it reduces the probability of death.

The comrades also boast that they will face no financial problems in the short run. It really seems that Greece won't renew the troika bailout mechanisms which means, among other things, that it should finally lose all funds from the European Central Bank in 8 days. The IMF will probably cut all the funding for Greece, too. Alan Greenspan has predicted that the Grexit is unavoidable and no financial player may be crazy enough to fund Greece today. I would normally agree with Greenspan except that I am afraid that he may be underestimate many people's insanity.

Many other experts estimate that they may run out of cash sometimes between the Tuesday February 17th and March – or, if they are lucky, by the middle of the year 2015. That's why I found it sensible to embed the classic music video of "[Greece in] Europe: The Final Countdown". ;-) I expect the end of the insanely failed experiment that we've known as "Greek economics" to arrive within a month or so.

There was a geopolitical conference in Munich. Lavrov represented the entirely constructive, peaceful, and friendly politics of Russia. For example, he is ready to restore the relations with NATO as soon as NATO realizes they should do the same thing. On the other side, it looked like some universal Russia bashing. However, if one looks more carefully, there is a very clear rift emerging in between the U.S. and Europe which is being discussed especially in the German media. The European politicians, starting from Merkel and Hollande, are genuinely afraid of a big war so they are working hard on a ceasefire etc. Sarkozy says that Crimea can't be blamed for its decision to reunify with Russia. Klaus has said that Crimea has always belonged to Russia.

Meanwhile, many loons in the U.S., including the top politicians, are thinking about sending lethal weapons to Kiev. Don't be surprised if and when the EU and Russia will team up to fight against you, fanatical warmongering aßholes.

Poroshenko has shown the confiscated passports of six Russian tourists as a proof that there are regular Russian troops in Ukraine. Cool but according to the Russian army's regulations, passports can't serve as IDs for Russian troops in service (of course, the troops have to hand them in, so that it is harder for them to desert etc.). I apologize for revealing the harsh truth to you, Mr Waltzman, but if your country isn't able to defend itself against six Russian tourists, it deserves to cease to exist and to be split among more viable countries. BTW Russia has kindly asked for copies of these six stolen Russian passports.


Heavy fights are continuing especially in the Debaltsevo pocket – an apparent cauldron of 7,000 or so Kiev-hired soldiers encircled along the border between the Donetsk and Lugansk independent unrecognized states, i.e. in the Midwest of (current) Novorussia. Most of the civilians have already been evacuated. When almost everyone is out, a full-scale destruction of the town (25,000 people before evacuation, a major railway hub – a Ukrainian Česká Třebová, if you wish) may begin. If all the unlucky Ukrainian soldiers in the cauldron were annihilated, this would be quite a blow for the government in Kiev.

German intelligence seems to claim that the total number of casualties of the Ukrainian civil war has so far been 50,000 rather than 5,000 we often hear. If true, it's just horrifyingly sad. I can't agree with the idea that someone who wants to energize this conflict with additional weapons is a decent human being. If some U.S. politicians send such weapons to Kiev – which would make it natural for Russia to do (at least) the analogous thing on the other side – they deserve to be tried in the Hague and hanged.

This is not funny in any way. Incidentally, days ago, Obama openly admitted that his administration "brokered a deal" for power transition (coup) in Ukraine. With 5,000 or 50,000 casualties, are you proud about the results of this intervention into politics of this large European country so far, Mr Obama? Is it a great feeling to have brokered the death of 15 times higher number of people than your namesake Osama bin Laden?

The Biathlon World Cup took place in the New Town of Moravia, Czechia. Some activists wanted to distribute lots of banners saying that "Norway is stealing Czech kids", and similar things, but their efforts turned out to be a flop as most of the visitors preferred the sport over politics and they didn't want to hold any banners.

Today, the Czech president Miloš Zeman was more successful when he was interviewed by Blesk [Flash], the #1 tabloid in Czechia. He said that the Norwegians are continuing in the practices of the Nazis and he picked the forced de-Bohemization and conversion of the Czech boys to the Nordic culture as the main argument. The boys are not allowed to speak to each other and they are not allowed to speak Czech to anyone.

Zeman has explicitly compared Barnevernet (the Norwegian children protection bureau) to Lebensborn, the Nazi-era German state-owned organization for planned sexual intercourse and reproduction of the Aryan race, something that I previously did in my blog, too. ;-) TRF may be ahead of everyone else but when it comes to the relationship between Norway and Lebensborn, it's just 1 month ahead of the Prague Castle.

The Czechs' problems with the behavior of the Norwegian authorities go well beyond the questionable accusations against the mother (or father, for that matter). Even if those accusations were right, and there's no credible evidence, Norway is still doing lots of things that seem utterly unacceptable to us and that emulate the behavior of our Nazi overlords between 1938 or 1939 and 1945 way too accurately. 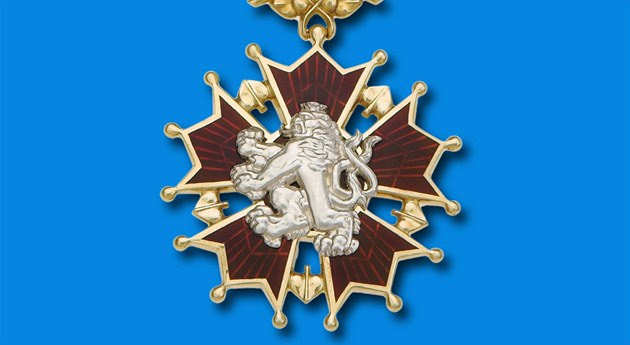 The Jordanian pilot was burned in the cage by ISIS and Jordan has vowed to erase ISIS from the face of the globe. Czechia will help Jordan in this fight at least symbolically. Jordan claims that it has already destroyed 1/5 of the ISIS facilities in recent days.

Tomorrow, the aforementioned president, Zeman, will travel to Jordan where Abdullah, the nation's king, will be awarded the Order of the White Lion, the Czech Republic's highest official honor (see the picture above for one of them – yes, it is a double-tailed lion, not just an average one), for his contributions to the bold struggle against the radical Islamic anticivilization.

Cross the Jordan, the river of all the hopes, Ms Helena Vondráčková 1968. This song with Biblical themes was widely interpreted as an invitation for emigration. The singer became one of the pillars of the totalitarian entertainment later, however. ;-)

By the way, Kofi Annan thinks that the birth of ISIS was helped by the U.S. invasion into Iraq.
Luboš Motl v 7:52 PM
Share