The following two stories share one thing: the sheer stupidity of the political opinions that became common in the U.S.

Oleg told us about this terrific screenshot from a CNN show. Obama considers arming pro-U.S. troops. I have already discussed how crazy and counterproductive it is to think about weapon deliveries to Donbass. Russia would surely respond correspondingly and not necessarily symmetrically and the escalation of the sad conflict would be the only possible outcome. But the new funny twist is that the pro-Kiev soldiers were called "pro-U.S." troops.

Much of the Internet sources that did notice this detail at all called it a "Freudian slip". But after some years in America, I actually think that many Americans genuinely can't even understand why we find it so laughable and weird. Much of this inability to laugh to this stupidity comes from the Americans' naive, Hollywood-like understanding of the good of evil; some of it arises from the complete misunderstanding of the world geography and history and, indeed, the very existence of a world outside the U.S.


OK, let me assume that the dear reader really doesn't understand why we think that the CNN employees are imbeciles if this caption was more than a typo.

The reason why the caption is so hilariously stupid is that no one gives a damn about America as "primary driver of anything" in this civil war. This war is not all about America. (I am feeling like Leonard when he was slowly – and using his arms – explaining to Sheldon that Sheldon was not a part of Leonard's relationship with Penny.) The first event that led to the ongoing civil war was President Yanukovitch's veto of a Ukrainian-EU treaty that would effectively cut some Ukrainian-Russian relations.


Some anti-Russia political forces in Ukraine didn't like the veto and some street controversies revolving about the very identity of the Ukranian nation or country erupted which were later amplified by extremely harmful Western feedbacks. All these internal tensions have been kept in check for many decades. The genie got out of the bottle and by forcing Ukrainians to decide about this divisive question and to respond to an abrupt change of the status quo, the civil war was made unavoidable.

But note that the other "powers" outside Ukraine that were deciding about the Ukrainian internal conflict were Russia and the European Union, not the U.S. Of course, in early 2014, the U.S. "brokered a transition of power in Ukraine", as Obama boasted, but that wasn't because someone in Ukraine actually wanted these things to be decided by the U.S. It was because the U.S. couldn't resist to stick their "liberal" interventionist pricks inside other countries including those in Europe. 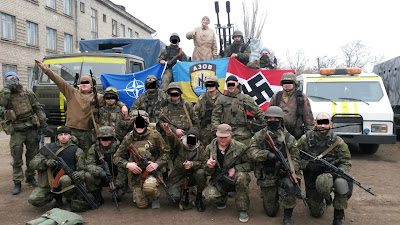 Second, the very idea that the pro-Kiev-junta troops are "pro-U.S. troops" is cool from a historical viewpoint. The picture above (click to zoom in) shows the Azov Battalion, the most important (loosely affiliated) subset of the Ukrainian Armed Forces (UAF). While the Novorussian Armed Forces closed the cauldron around Debaltsevo and units of UAF begin to surrender, Azov began an offensive from Mariupol (which they currently control) and grabbed several villages from NAF in recent 24 hours.

Note that Azov uses nice logos, especially the symbol on the right side – Americans must be proud that these troops are "pro-U.S. troops", unless they worry that America actually fought against these folks in the most recent world war.

The pro-U.S. troops in the Azov Battalion sometimes have to see the doctor, too. This guy's pro-U.S. tattoo is well done, isn't it?

Tomorrow, the new Greek communist government has to present its "alternative plan" what to do with their debt because, as you must have heard, these comrades don't want to repay the debt in the old-fashioned sense because capitalism and what we considered to be debt repayment has failed, they decided, because it has led to austerity and the Greek people just don't like it. The fact that all the Greek troubles were caused by four decades of completely wrong, left-wing, anti-growth, and financially irresponsible policies is of course a taboo.

While Europe has already understood that the Greeks have become full-time parasites who are abusing the compassion and the apparent (mostly fictitious) relationships that exist between the European nations because of the Eurozone and the European Union, most of the American officials – with the exception of Alan Greenspan who understands that no one can pay these freeloaders permanently – seem clueless.

Obama has indirectly supported the idea that Europe should forgive the debt and to keep on sending unlimited amounts of money to this black hole because these people are not doing great and it's bad to impose "austerity" when someone is not doing well. But there are billions of people in the world who are doing less well than Greece was doing in recent years. Why doesn't comrade Obama end the "austerity" of those nations, e.g. his homeland of Kenya? 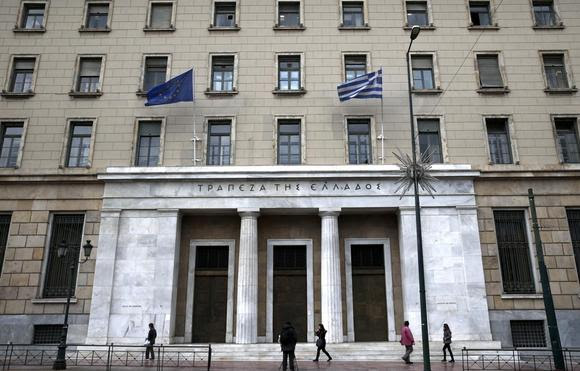 A detail that makes the situation even funnier is that the new Greek defense minister, a guy from the fascist party that has formed the "diverse" coalition with the Marxists in Syriza, emphasizes that Greece has a "Plan B" where to get the funding after they are told "nein" tomorrow. They will just ask the U.S., China, or Russia for cash. And perhaps someone else, too.

I have already discussed some aspects of the idea of a Russian bailout for Greece. But what about the American one? It's even better. Barack Obama – along with the "economist" Paul Krugman – considers himself a soulmate of Syriza. So why wouldn't America just pay the debt and provide Greece with extra funding? It makes much more sense than to ask the most important European power(s) – which clearly have very different beliefs about the desirable management of government finances and about the very meaning of the word "debt".

Obama may simply mint a trillion dollar coin and use 1/2 of it to repay the Greek debt and the rest of it to stimulate the growth. With his modest help, Syriza may hire everyone into the public sector and pay the 13th and 14th salary and pensions to everybody, and so on.

Such a new affiliation of Greece with the U.S. would surely solve a problem that the European countries are facing and have been facing for several years. ;-) I am mostly joking but not quite. It really does seem that the White House is being occupied by a guy who thinks that to be unable to pay while having half a trillion of debt isn't a problem and the government is obliged (or, if it becomes impossible, other governments are obliged) to guarantee high living standards to such people.
Luboš Motl v 6:15 PM
Share