When I am posting this message, it's the the birthday of Albert Einstein, also known as the \(\pi\) day. More precisely, as you may check, this blog post was written on


Pilsner winter time which contains as many digits of \(\pi\) as you want – you may probably find such a moment once in a century, if you trust Stephen Wolfram. I am not cheating: I was really writing this blog post after 9 am although the precision indicated above is exaggerated LOL. 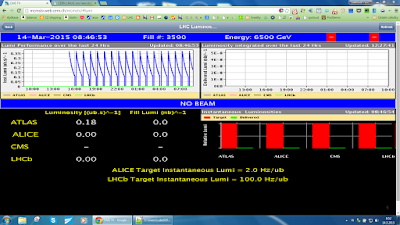 And as the screenshot above (click to zoom in) shows, the year 2015 has finally started with everything that defines it – the Run II of the Large Hadron Collider in particular. You may get the current version of the screen above at this CERN page; I clicked at "Luminosity" (the second option) to get to the energy and luminosity chart above.

You may get to the screen at any time if you find the LHC section of the right sidebar on this blog (the full dark green template) and find the hidden URL beneath the words "highest luminosity".


At any rate, the energy of each proton in the beam is now \(6.5\TeV\), as the graph shows. If two such protons collide from the opposite directions, the momentum cancels but the energy doubles: the center-of-mass energy of the proton pair at the LHC has increased to \(13\TeV\). It was just \(8\TeV\) in the 2012 Run – and it is only planned to increase to \(14\TeV\) later, probably in this year.


For a proton to increase its energy from the latent energy \(m_0c^2 = 0.94\GeV\) to \(6,500\GeV\), it must move very quickly. Back in December, I told you that the energy would reach \(6.5\TeV\) in March – it did so now, this resource is trustworthy – and calculated the Lorentz \(\gamma\) factor and other relativistic effects connected with these really huge speeds.

Anyway, let us assume that the collisions of proton pairs with the energy \(13\TeV\) are taking place. The Earth hasn't been devoured by a black hole yet. What a surprise! ;-)

It may be interesting to re-learn the units of luminosity again. The chart shows that the luminosity is restarted to the maximum value, \(0.37\) units, once an hour, and it gradually drops to \(0.11\) units or so. In average, the luminosity is close to \(0.25\) units, the graph tells us.

Even in the third world, in this case the land of the Apaches and Siouxes, they are interested in the European experiment. Dr Lincoln is affiliated with the Fermilab, an Illinois fan club of CERN. Continuation about detectors. It would be totally inappropriate for Lincoln to choose a favorite experiment, he stresses, especially if it were the best one among all, the CMS, that kicks ass.

The units are \((\mu {\rm b}\cdot s)^{-1}\), i.e. inverse microbarns per second. The right sidebar of this blog claims – and I have no reason not to trust it – that the highest luminosity achieved at the LHC so far was \(7.8/{\rm nb}/{\rm s}\). If my calculations are right, the numerical part is about \(20\) times greater than the recent one; and the unit was \(1,000\) times greater (a nanobarn is smaller than a microbarn, but the inverse nanobarn is larger than the inverse microbarn – the reversal is what the word "inverse" does for you).

So the luminosity right now is about \(20,000\) times smaller than the maximum one achieved in 2012. The LHC isn't running at full speed yet – but it is probably running already. Has the Run 2 of the LHC already produced some new particles? I think that even if the collisions were already allowed, and they are probably not, it is unlikely because the number of collisions was very small. But if it were some really special heavy particle that was out of reach in 2012 and became possible now, I think that it couldn't even be excluded that the tiny number of collisions has already produced something new.

The word "seven" in the theme song should become "thirteen" (teraelectronvolts) now. Among the objects enumerated at the end of this 2010 song, only the Higgs boson has been found so far.

You may also convert the luminosity to the number of collisions per second. I will use the same conversion coefficient that we had in 2012 although the energy does change it slightly. The total delivered luminosity to one detector was about \(27/{\rm fb}\) in 2012 (the recorded one was about 92% of this figure) which corresponded to 1.9 quadrillion collision.

Please feel free to verify it and correct me.

I guess that they will be very careful (perhaps unnecessarily careful) so the gradual increase of the luminosity will occupy the following month, and we will only get to reasonable competitive luminosities sometime in May 2015 when the "truly new physics research" will begin again. If Nature has prepared some beyond-the-Standard-Model objects and phenomena, the first trillions of collisions will have the highest chance to reveal their signs. Discoveries may place quickly – but the LHC may also decide to tell us (Nature did the decision behind the scenes) that the Standard Model continues to be OK at these energies, too.
Luboš Motl v 9:26 AM
Share