Last night, I was reading the Sunday edition of Frankfurter Allgemeine Zeitung where the first seemingly trustworthy estimate of the day when Greece runs out of cash has appeared. See Deutsche Welle for a new story in English. 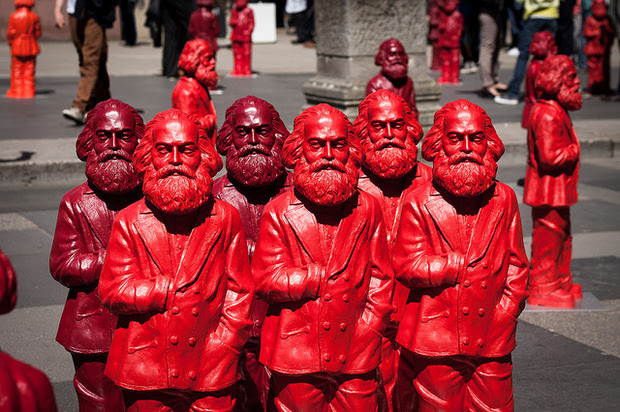 A statue of the Greek government

The European Commission – a body that is supposed to be the government of the European Union – has some folks in Athens and they should know something about the amount of cash in the Greek government coffers and about the daily inflows and outflows.

The last day when Tsipras' boys will boast liquidity should be April 8th. On the following day, Greece is supposed to make a half-a-billion-dollar repayment and that should already be too much for their financial abilities unless they will receive some new aid. Interestingly enough, Tsipras will visit Moscow on April 8th so it can't be excluded that Russia will provide Greece with cash just hours before the otherwise predictable default.


Any help from the Western sources has, hopefully, become somewhat unlikely because all the "Troika" institutions seem to demand specific technical plans for money-saving policies before they send new money to Greece. It's an attitude that should have been rigorously adopted for many years – or at least for several months, since the Syriza victory – but at last, there are indications that these people are able to learn something.


Everyone who has had basic ideas about the program of Syriza must have known for a very long time that the program was always to abolish all reforms, to enforce all conceivable policies that make both the current fiscal situation and the future competitiveness of Greece even worse, to lie to all the other European nations, to spam the negotiations with fog and worthless vague promises that will never be fulfilled, to demand ever greater amounts of money, to refuse any money-saving policies, duties, responsibilities, and commitments, to waste everyone's time during the negotiations, to pretend that Greece is an important country that may screw the life of everyone, and to blackmail everyone 24 hours a day, 7 days a week. This was the strategy that Syriza picked and that turned it into the victorious party.

Suddenly, the finance ministers of the Eurozone countries start to see it, too. How much time did you need, Gentlemen? The Slovak finance minister Peter Kažimír said that folks were finally running out of their patience and he has never seen so much unity – when it comes to the dissatisfaction with the Greeks' behavior – even though he's been in Brussels since 2006.

Tsipras and his comrades have unilaterally approved a "humanitarian crisis law" that throws some extra billions of Europeans' money among the Syriza voters. The poorer ones have lots of things for free now; we were warned about these plans in advance, too. Of course, there has been no "humanitarian crisis" in Greece so far. Only shameless spoiled brats who have never learned what it means to be restricted by material considerations and who have never needed to do any useful work in their life – Tsipras and Varoufuckis are really the ultimate "role models" for such people in Greece – may have the chutzpah to use such words for the excessive luxury that the Greeks enjoyed in the recent 4 decades.

But after April 9th, it may happen that there will be a "humanitarian crisis" and the term may become useful and appropriate. I think it's a good idea for the Europeans to start to use this name for the Greek problem because this finally suggests that the absurd 40-year-long waste of money is coming to the end and Greece will be dealt with analogously to other countries that are broke, e.g. some countries in Africa. We may send them some help but we don't have to.

We may be sending trains with some cheap excess food to Greece to reduce starvation and cannibalism (yes, I definitely do think that Tsipras and Varoufuckis should be among the first shameless Marxist pork that should be eaten by the hungry Greeks) but we must stop playing this insane game that Greece is an advanced country and that the donations sent over there are "investments" or "loans".

To have €325 billion of debt may look like a serious problem but the moral crisis in Greece is far worse than that. It will take at least many generations before the culture of entitlement will be largely eliminated in Greece, before they learn that one must do something that is actually useful for other people – and not just for the government that is parasitic by itself – if he wants to eat, drink, and do other things. Greece may have built lots of infrastructure and buildings for the European money but when it comes to the organization of the society and their individual thinking, they will have to start from scratch. They have nothing to built upon. The moral devastation of that nation is far worse than what we had in Czechoslovakia after 41 years of communism (the same number of years, by the way).

Commenters from Greece who have come to my blog – and other websites – have assured me that a sensible person wouldn't want to make any investment in Greece for a very, very long time.
Luboš Motl v 9:34 AM
Share