If you're somewhere in Europe, expect the partial solar eclipse sometime between 9 am (the Moon will first bite into the "2 o'clock" place of the solar disk) and noon local time (the Moon will leave the Sun at the place "9 o'clock" or so). For example, Czechia will see the eclipse to peak around 10:47 am Prague Winter Time when about 75% of the area of the solar disk will be hidden by the Moon (France will peak at 80% etc.) and the remaining Sun will be U-shaped (the shadow will be close to "noon" of the solar disk).


A babe explains the solar eclipse in 2 minutes


We the Europeans won't see a solar eclipse that is this strong until 2026. Today's eclipse is rather intense because we also have the Supermoon on the same day – a coincidence. The sky looks completely clear or sunny so we should be lucky today. 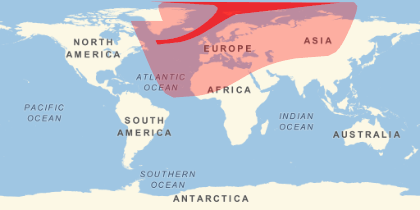 Today's solar eclipse will also be a total one in a thin strip going mostly through the Atlantic ocean, on the Eastern side from the Greenland and then towards the North Pole (a coincidence).


Tonight, we will welcome spring equinox (the beginning of astronomical spring), too. It is another coincidence (a freaky Friday, indeed) that today, the solar eclipse takes place on the day of the equinox. However, it is not a coincidence that we have to have "new moon" just like today (the Moon looks like nothing at night) when solar eclipse is occurring.


Be careful about your eyes. Obviously, looking to the Sun with your naked eyes for several seconds may be very bad for your retina. I believe that if you place four pairs of sunglasses (the hands may be broken) on top of each other and narrow your eyes at the same moment, you should be OK for a second or two. You don't have to become a welder to watch the solar eclipse, I think.

I told you to be careful about your retinas. There is another thing you must be careful about: the cuddly, weak, vulnerable, white victims of global warming... OK, I mean the godless killing machines called the polar bears. Czech guy Mr Jakub [James] Moravec (37) went to Svalbard to see the total eclipse and this completely innocent man was brutally taken out of his tent and injured by a polar bear.

You may agree that the polar bears are unfair and counterproductive. If they were fair, they would have attacked and neutralized notorious crackpot Peter Shmoit who is at Svalbard, too. iDNES.cz has an interview with the injured guy in the hospital. He was in his sleeping bag at 5:30 am when the animal torn the zipper, entered and, wanted Moravec's head. People from other tents have distracted the bear by shooting at him. Poor polar bear, someone told me. It was a smaller polar bear; if it were a standard size polar bear, Moravec adds, it could have been difficult for Moravec to act as a worthy opponent in the wrestling match.

Some appropriate message to the polar bears may be heard between 2:57 and 3:14 of this music video. The original version of this song was recorded by Barenaked Ladies, as I only learned recently, the same men who are behind the theme song for The Big Bang Theory sitcom.

P.S.: If you have missed the event, here is the 3-hour-long video from Capenhagen, Northwestern Czechia: enjoy! ;-)
Luboš Motl v 7:00 AM
Share