Senator Ted Cruz asked the NASA administrator Charles Bolden (who was appointed in 2009 and has played the role of an Obama puppet ever since) what is the core mission of NASA. 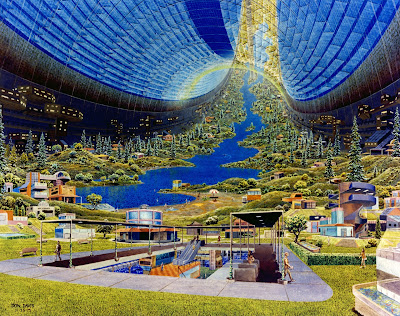 Bolden answered that he recently read the original National Aeronautics and Space Act of 1958 and he concluded that NASA's core mission is space exploration along with the investigation of the Earth's environment and making the Earth a better place.

If you click at the link in the previous sentence and read the bill, you will see that 2/3 of Bolden's claim are dirty shameless lies. There isn't an iota in the bill that would say that NASA has something to do with the environment, with its protection, with the climate or its change, with climatology, with the warming, with the investigation of any Earth sciences in general, or with making the Earth a better place.


Instead, NASA's mission – and not just core mission, all of the mission – is exactly what a person with common sense would expect: to develop and deploy the technology with which you may fly in the atmosphere and beyond the atmosphere and to go into space and explore it.

It is really the objects that fly, like the rockets, that NASA is all about. They may be used in several – usually obvious – ways but if it doesn't fly, it is not NASA's business. Due to the partial successes of the commercial space companies, NASA's mission has effectively become narrower, not wider – it should focus on things that fly beyond the low Earth orbit.

Bolden just made it up – all these things. It may be useful to copy the bill's definitions of the key notions that NASA is supposed to work with:

(1) the term "aeronautical and space activities" means (A) research into, and the solution of, problems of flight within and outside the earth's atmosphere, (B) the development, construction, testing, and operation for research purposes of aeronautical and space vehicles, and (C) such other activities as may be required for the exploration of space; and

(2) the term "aeronautical and space vehicles" means aircraft, missiles, satellites, and other space vehicles, manned and unmanned, together with related equipment, devices, components, and parts.


Unfortunately, the recent reality at NASA does resemble the untrue claims made by Mr Bolden. NASA has lost its ability to send humans to space and America depends on Russia – and even that dependence became extremely unreliable due to the deteriorated U.S.-Russian relationships.

This is pretty much an inevitable outcome of the budgetary changes within NASA since 2009:


Discussing the president’s $18.5 billion budget request for NASA for 2016, he [Ted Cruz] complained that funding for Earth sciences has increased by 41 percent since 2009, while space exploration has seen a 7.6 percent decrease. [Source]


This is a stunning development – a shocking deterioration of the organization that used to be so prestigious. The Earth-space funding ratio grew by the factor of 1.41/0.924 = 1.526 in five years or so.

I can imagine how offended the people who were associated with NASA's golden years – engineers, moonwalkers, and many others – must feel now when this subpar cesspool of politically tainted pseudoscientists has become a major and cataclysmically growing portion of NASA.

Of course that NASA must primarily investigate space, try go to space, do old, new, and interesting things in space, and perhaps go to Mars – and make achievements that require an unusual concentration of skills, funds, and efforts and that inspire the younger (and older) generations, as Ted Cruz says. I hope that he or someone like him will become the U.S. president and entirely eliminates all these tumors from NASA that simply shouldn't be there so that there is enough money for the valuable part of NASA to strengthen.

Bloomberg wrote a story in which a quote by Colorado Senator Cory Gardner was also emphasized:


It's a great quote and as far as I can see, it was almost exactly copied from the Interstellar movie, see the beginning of this trailer, a fact that the journalists missed. Recall that in the movie, NASA are the only enlightened technocrats who survived while everyone else is taught to become a farmer in the conditions of the new Dust Bowl.

Another report linking "big science" and "big politics" shocked me today in the morning. There exist rumors – initially denied by the Hungarian government and by Rosatom – that Euratom and the European Commission have killed Hungary's plans to expand its Paks nuclear power plant using extra Russian technology and fuel.

I don't understand the European Union laws enough – it's toxic mess with lots of potential time bombs – but so far I have been absolutely convinced that the member states haven't lost their basic sovereignty e.g. when it comes to trading with third countries. If we actually did lose this sovereignty and if the Hungarian project may be threatened or even terminated, Brussels is a huge threat for the basic energy security of countries like Hungary and Czechia (which sees a similar role nuclear energy and similar plans to expand this role) and it would be clearly a good idea to leave the EU as soon as possible.

In minutes after this Hungarian shock, I looked into our, Czech situation and it is not just analogous, it could be even worse. Our nuclear energy authorities approved completely sensible visions saying, among other things, that it's preferred for the final construction of the nuclear fuel to take place on the Czech territory etc. These conditions favor the Russian fuel. Westinghouse began some hysteria and it will clearly try to abuse the interventions from Brussels with its claims that "it's mandatory to diversify" to fight its Russian competition. Sorry, this lobbying is not what I consider a fair free competitive process. The nuclear cooperation with Russia has worked pretty much flawlessly for us and we shouldn't be manipulated into thinking that there "had" to be something wrong with it.

Off-topic: a rally against the NATO and NATO bases in Slovakia took place in our brothers' capital, Bratislava. The most well-known speaker (who agreed with the protesters) was Ján Čarnogurský, a center-right Christian former prime minister and a former dissident. They had banners saying that NATO divides the nation, Yankees go home, no to war, NATO – a criminal organization, and so on. I used to be a supporter of the U.S. radar in Czechia etc. but I would vote against NATO bases here if I were asked, too. This is just way too analogous to the Soviet bases after 1968, whether you try to paint it with pink ink or not. And I just feel that the main U.S. military goals are not really correlated with the Czech ones these days.

BTW Czech president Zeman is the only EU leader who plans to attend the 70th anniversary Victory Parade in Moscow in May. I think that the absence of others indicates a shameful effort to rewrite the history and piss on the tombs of all the Soviet soldiers who died to beat Nazism.
Luboš Motl v 8:01 AM
Share