Sometime in April 1915, Emmy Noether was completing her groundbreaking theorem that links conservation laws with the symmetries of Nature. 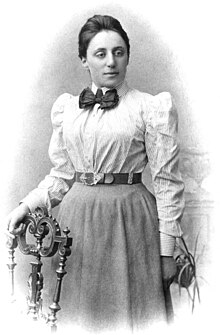 Noether's father, Max Noether, was a German Jewish trader whose one leg was heavily damaged by polio. Instead of becoming a cripple who depends on others, he became a self-taught doctor of algebraic geometry – doing things similar to Alfred Clebsch.

He had 4 children and the oldest ones, Amalie Emmy Noether, was born in 1882. She was a clever but "ordinarily clever" girl and a popular kid who was lisping, near-sighted, took piano lessons, loved to dance, was taught to cook and clean. The latter two details imply that by preparing women "for the kitchen where they belong", men don't necessarily stop the career of the greatest female mathematician of all times.


Her younger brothers were Alfred (chemistry PhD), Fritz (applied mathematics PhD), and Gustav (whose life was damaged by a chronic illness). When she was 18, in 1900, her French and English was good – "sehr gut", to be more precise – and she was expected to enter a language school for girls. Instead, she went to University of Erlangen.


That decision of hers – which turned out to be a very good one for her and for science at the end – may also be considered brave or ironic or crazy because the university insisted on segregation of girls and boys. There were 984 boys and 2 girls. She was one of the two and could only audit the classes. At age of 21, she graduated in Nuremberg, anyway. Between 1903 and 1904, she already went to University of Göttingen – a global epicenter of mathematics and physics – and was exposed to Schwarzschild, Minkowski, Blumenthal, F. Klein, and Hilbert. Within a year, the university declared women to be equal to men.

With this training, she returned to Erlangen and in 1907, she completed a dissertation on biquadratic forms. There is a good reason to think that there already existed some affirmative action and reverse sexism at some places those 108 years ago. Why? Because the dissertation was well-received. Why is it strange? Because an authoritative source later pointed out that the dissertation was cr*p. The source was Emmy Noether herself.

Up to 1915, she was teaching while getting no salary, sometimes substituting her dad. Ernst Fischer influenced her in those years.

Finally, in Spring 1915, 100 years ago, Hilbert and Klein invited her to Göttingen. It wasn't easy – women were not equal in Göttingen at that time yet. Humanity professors were asking:


What will our soldiers think when they return to the university and find that they are required to learn at the feet of a woman?


I do not see that the sex of the candidate is an argument against her admission as privatdozent. After all, we are a university, not a bath house.


At the end of April 1915, Emmy's mother died; her father retired; and a brother was sent to World War I. She spent weeks in Erlangen, mostly to take care of her old father.

In Göttingen, she wasn't paid for teaching and she was marketed as Hilbert's "assistant". However, very shortly after she arrived to Göttingen, she proved Noether's theorem. The paper “Invariante Variationsprobleme,” Nachr. d. König. Gesellsch. d. Wiss. zu Göttingen, Math-phys. Klasse, 235–257, was published in 1918, three years later.

Fortunately, in 1971, a guy named Tavel translated it to English and in 2005, Frank Wang typed it in \(\rm\LaTeX\) and submitted it to the arXiv:


It took me some time to find the \(\rm TeX\) version of the paper. The preprint is 14 pages long and it looks much clearer than when I was reading the German original as a teenager. She presents the insight as a combination of "Lie groups" and "calculus of variations". The terminology wasn't settled yet so Lie groups were called continuous groups (in Lie's sense) etc. Some of her sociological references sound cute, at least in the English version. "I may cite Lorentz and his pupils (for instance Fokker)... for special infinite groups." The end of the abstract (and the paper) suggests that it wouldn't be quite trivial to correctly attribute all the steps towards Noether's theorem but I think it's fair to say that she did "most of it".

The theorem isn't directly "finding new theories of Nature" which is why physicists don't celebrate it to the same extent as Einstein's general relativity, for example. But it is an extremely fundamental general insight about Nature and mathematics that underlies it. I would say that it's about as important as Feynman's path integral approach to quantum mechanics – which is also "not a new theory" but "pretty essential to know".

This theorem studies general symmetries and general conservation laws of physics-like systems. But the canonical conclusions we often use in physics are the following ones:


Similarly, we may say that the electric charge conservation is linked with the global part of the \(U(1)\) electromagnetic gauge symmetry. Purely in quantum mechanics, parity is (multiplicatively) conserved iff the laws of physics are left-right-symmetric in space, and so on, and so on.

The invariance under the Lorentz/Galilean boosts means that the center of mass of a physical system is moving along a straight trajectory, so the "velocity of the center of mass" is conserved. This is slightly different than the other examples because the generators of the boosts don't commute with the Hamiltonian (the commutator are the components of momentum).

But this link between conservation laws and symmetries – two concepts that initially looked very different – may be considered an early example of a great "conceptual unification" in physics.

Also, I want to point out that the classical proof of the link may look rather technical. Noether's theorem is one of the things that get simpler in quantum mechanics. Why is there a connection between Lie symmetries and conservation laws? Well, because both of them exist iff \([H,L]=0\) where \(L\) is a symmetry generator. On one hand, this equality combined with the Heisenberg equation of motion says that \(dL/dt=0\) i.e. that \(L\) is a conserved, time-independent quantity. On the other hand, you may view the commutator as the variation of \(H\) under the infinitesimal symmetry generated by \(L\). And its being zero means that the Hamiltonian is an invariant of the symmetry – i.e. the laws of physics encoded by the Hamiltonian respect the symmetry. So Noether's link is all about reading the "commutator" in two different ways – by making one "factor" in the commutator passive and the other active, or vice versa. (One may also mention a simple, but not quite as simple, explanation in terms of the path integrals.)

Back to her life. She has done a huge amount of things. After the war, there was the 1918-1919 German Revolution. Equality between men and women was established in the whole nation. For a year, she was still getting no salary, while boasting a good title, but it got fixed in a year. She was appreciated in the 1920s, did lots of topology, abstract algebra, and so on. In 1928-1929, she visited Moscow and was working with Alexandrov as well as Pontryagin, among others, and was claimed to be instrumental in the development of the Galois theory.

Her visit added some problems to her future in Germany because student leaders complained of living with a "Marxist-leaning Jewess". These subtle criticisms were replaced by a full-fledged war in the wake of Hitler's rise in 1933. "Aryan students need Aryan mathematics, not Jewish mathematics," she often heard. One of her ex-students Weber was working to establish this "Aryan mathematics". Like other Jewish professors, she was fired. Hermann Weyl remembers her courage, frankness, unconcern about her fate, her support for others, and conciliatory tone – so strongly contrasting with the hateful, mean, and desperate atmosphere imposed by the national socialists.

She had no problem to leave. She was considering to move to Moscow where she visited a few years earlier. But her fans and friends in the U.S. and U.K. established a special fund for her so she moved to the Institute for Advanced Study in Princeton (Oxford was possible, too). Colleagues around her made her life nice but the Princeton University was opposed to female scholars at that time.

In April 1935, 80 years ago, doctors found tumors in her pelvis/ovary/uterus and she soon died with a 43 °C fever.

Her contributions to mathematics are numerous and diverse. Obviously, I am not an expert in most of these things, and when it comes to the things I know, I am not aware of the history – what was exactly discovered by her. I won't pretend to be an expert in these matters. Physicists will always worship her for her link between the conservation laws and symmetries.

A big part of her life story was about women in the Academia – 100 years ago (and at many places in the U.S. also 70 years ago), the question whether women should have the right to become academics was genuinely open and the opinions were genuinely mixed. She has arguably become the history's most important female mathematical physicist and mathematician so far.

I think that when one tries to get an idea how exceptional it is for a woman to get this far, he should realize that the average female Jew has a higher IQ than the average male non-Jew. The lower female variance reduces the number of the "very top female mathematicians" even among the Jews but Jewish women are clearly not fighting a hopeless fight against the laws of Nature.

Thank you, Emmy Noether, for your contributions and your inspiring life.
Luboš Motl v 8:11 AM
Share