ATLAS has posted a new preprint


boasting numerous near-2-sigma excesses (which could be explained by vector-like quarks and chiral \(b'\) quarks, but are too small to deserve much space here) and a more intriguing 2.5-sigma excess in various final states with four top quarks.


This four-top excess is most clearly expressed in Figure 11.


This picture contains four graphs called (a),(b),(c),(d) – for ATLAS to celebrate the four letters of the alphabet ;-) – and they look as follows: 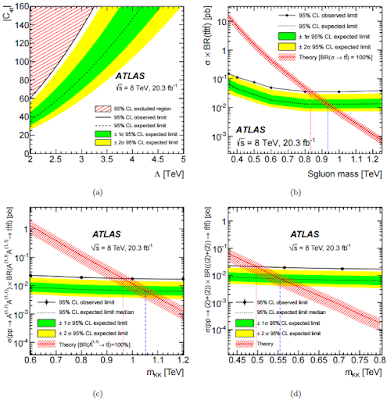 You may see that the solid black curve (which is sometimes the boundary of the red excluded region) sits strictly outside the yellow-green Brazil one-or-two-sigma band. The magnitude of the excess is about 2.5 sigma in all cases.

The excess is interpreted in four different ways. The graph (a) interprets the extra four-top events in terms of some contact interaction linking four stops at the same point. The horizontal axis shows the scale \(\Lambda\) of new physics from which this contact interaction arises. The vertical axis is the coefficient of the quartic interaction.

The graph (b) assumes that the four leptons come from the decay of two pair-produced sgluons whose mass is on the horizontal axis. On the vertical axis, there is some cross section times the branching ratio to four tops.

And the remaining graphs (c) and (d) assume that the four tops arise from two universal extra dimensions (2UED) of the real projective plane (RPP) geometry. The Kaluza-Klein mass scale is on the horizontal axis. The vertical axis depicts the cross section times the branching ratio again. The subgraphs (c) and (d) differ by using the tier \((1,1)\) and \((2,0)+(0,2)\), respectively.

Extra dimensions are cool but I still tend to bet that they will probably be too small and thus inaccessible to the LHC. Moreover, the RPP geometry is probably naive. But it's fun to see something that could be interpreted as positive evidence in favor of some extra dimensions.

I find the sgluons more realistic and truly exciting. They are colored scalar fields ("s" in "sgluon" stands for "scalar") in the adjoint representation of \(SU(3)_{QCD}\), much like gluons, and may be marketed as additional superpartners of gluinos under "another" supersymmetry in theories where the gauge bosons hide the extended, \(\NNN=2\) supersymmetry. Such models predict that the gluinos are Dirac particles, not just Majorana particles as they are in the normal \(\NNN=1\). This possibility has been discussed on this blog many times in recent years because I consider it elegant and clever – and naturally consistent with some aspects of the superstring model building.

Finally, I also want to mention another preprint with light superpartners, ATLAS Z-peaked excess in MSSM with a light sbottom or stop, by Kobakhidze plus three pals which offers a possible explanation for the recent ATLAS Z-peaked 3-sigma excess. They envision something like an \(800\GeV\) gluino and a \(660\GeV\) sbottom.
Luboš Motl v 8:03 AM
Share