Cornell study in PNAS: women STEM faculty are 2-to-1 overrepresented

Steven Pinker called it a shocker of a study but I am not surprised at all. The results coming from the paper I will discuss pretty much agree with my estimates based on the insider knowledge of similar mechanisms.

Wendy Williams and Stephen Ceci (Cornell) just published a paper in the Proceedings of National Academy of Sciences.


If you want to verify or reproduce their paper in some detail, you need to be careful about all these issues. But the results are summarized below and they speak a clear language: 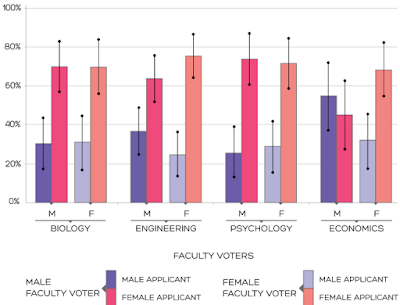 The votes are also divided according to the sex of the hiring committee member: the "darker" red and blue bars refer to "male decision makers"; the "lighter" bars (right 2 bars in each quadruplet) express the opinions of the female voting faculty.

When all this information is taken into account, you may see that the anti-male bias is virtually omnipresent – it affects biology, engineering, psychology, as well as economics (engineering and economics represent the math-intensive fields). Among the eight combinations of "field and sex of voter", only senior male economists avoid the bias – they have a much smaller, 1.1-to-1, bias in favor of the male applicants (which is statistically indistinguishable from fairness).

Aren't those numbers enough for everyone who is reasonable to agree that the feminists are spectacular liars and/or unhinged cranks? The last sentences of the abstract works hard to spin this failed meritocracy in a positive way:


These results suggest it is a propitious time for women launching careers in academic science. Messages to the contrary may discourage women from applying for STEM (science, technology, engineering, mathematics) tenure-track assistant professorships.


Oh, sure. The fact that the committees primarily choose applicants according to their non-convex organs and breasts is such a wonderful thing, isn't it? The technical article is supplemented by a CNN op-ed by the authors titled The Myth About Women In Science which also mentions Emmy Noether and Lisa Randall, among others. See also Cornell Chronicle.

The fact that male (=more likely to be real) economists avoid this bias is interesting – but I think I would have predicted it, too. They are thinking about these matters in an economics way. If there is a better applicant, he or she should be hired. That's also why economists generally don't believe the ideology of victimism.
Luboš Motl v 6:41 AM
Share