It's a special day of the year. You may expect some pranks from some people; on the contrary, other people who are wrong 364 days a year may happen to be right today. 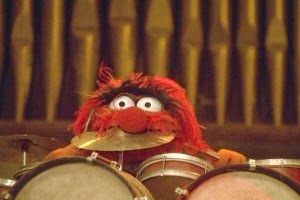 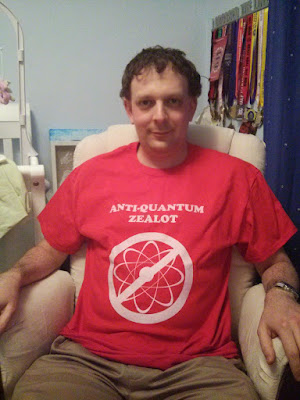 Armchair physicist Matt Leifer should send this appropriate T-shirt to his fellow anti-quantum zealots including Gerard 't Hooft plus 87 other Gentlemen whose list I can provide him with.

Concerning the second category, Matt Leifer has finally realized that I am right when it comes to the foundations of quantum mechanics (as well as other things). But to be sure, he has still used the relevant T-shirt that he deserved until yesterday. This armchair physicist is an anti-quantum zealot, indeed.

Because I am very generous, I will postpone suing him – "anti-quantum zealot" is my registered trademark. I hope that Stephen Hawking® who has registered his name as a brand (somewhat distastefully emulating a TV pseudoscientist named Brian Cox) will be equally generous.


But I like the April Fools Day prank by Joseph Polchinski. He wrote a satirical article


for Scientific American. It is a hilarious piece – the title is far from being the only hysterical claim celebrating his wrong papers that will make you laugh out loud. It's good that he is able to make fun out of his embarrassing errors.

You will be asked to pay to Scientific American for Joe's April Fools Day article and unless you are a billionaire, you don't want to do that. But you may get this 32-minute video supplement for free. Before you revolutionize physics and prove the firewalls, you have to know what a black hole is. I exploded in laughter when Polchinski made this comment.

(A YouTube commenter says that Joe Polchinski is Kermit the Frog, a Muppet identified with Matt Strassler by Adam Falkowski.)

Around 3:16 in the video, Joe Polchinski makes the bold claim that for 3 years, "no one has found a mistake" in their firewall arguments. Come on, Joe, this is bullshit. The literature is full of papers that show your mistake – and really also your newly found stupidity – in quite some detail. Using the climate alarmists' jargon and philosophy, there is at least "consensus" that your paper is probably wrong, and even you have said that you don't really believe that the firewalls exist.

BTW Clara Moskowitz mostly asks soft questions but she manages to present a cool new simple proof why there aren't any firewalls when she asks, at 24:00, whether the cosmic horizons that follow the big bang singularity (analogous one to the black hole singularity) should also be replaced by firewalls. If this were right, and it should be right by the equivalence principle, we couldn't exist because we're on the wrong (in the BH case, it would be called "interior") side of the firewall! ;-)


Meanwhile, two physicists who still prefer formulae and rational arguments over pranks, hype in popular magazines, and the idea that the revolution in physics is one step away from the complete stupidity have published a 136-page paper


elaborating on their solution to the paradoxes mentioned in the context of the black hole information puzzle. Papadodimas and Raju have shown that their state dependence of the operators describing the black hole interior is a necessary condition to avoid firewalls. This state dependence is consistent, necessary for other things, and much of the AdS/CFT literature is formulated in a way that allows one to assume that the operators are state-dependent, anyway.

Believe me, lots of arguments may be summarized on 136 pages, and PR's arguments sound very clear and sort of "complete" to me.

One particularly cool byproduct of their detailed reanalysis of the issues is their derivation of the ER=EPR correspondence. I've been convinced that ER=EPR may be directly and explicitly deduced from PR at least since October 2013


...But I believe that even though it hasn't been written in the literature yet, the Papadodimas-Raju way of thinking implies a rather simple way to prove that the ER-EPR correspondence is true. How do we prove it? Well, we just prove that if we have the Hilbert space of states...


Now, they may also "calculate" that systems entangled in "chaotic ways" (or entangled with a small number of qubits) don't produce smooth geometric throats.

Also, parts of Kyriakos' and Suvrat's new paper use the observation that entropy and temperature are not linear operators on the Hilbert space (December 2012) even though quantum gravity links them to areas and accelerations, geometric observables (in the bulk), so the latter can't be state-independent operators, either. They applied it to the entanglement entropy in the Ryu-Takayanagi formula which makes the proof of the state-dependence particularly comprehensible.

I have only fully read about 1/6 of the new paper and quick-read 1/2 of it so far but I hope to eventually increase both numbers...

The authors have particularly recommended me Section 7.6 and Appendix A about the fat tails of coherent states' overlaps and the semiclassical description of the ideas. You may want to focus there, too.

According to a study in Nature, global warming has resuscitated the dragons. The article contains a picture of the beasts that are arising from kittens when the temperature increases by 1.5 °C, the new threshold of a tipping point.

It's OK but look at this 1984 BBC show about lirpa loof, a new animal in London's zoo that mimics everything you do. David Bellamy, a botanist and a well-known climate skeptic, starred as the zoologist here.

Bonus: Interview (by ALICE@CERN) with Savas Dimopoulos, a top particle phenomenologist at Stanford, is about experiment and theory, truth and enjoying oneself, Higgs and SUSY, and related stuff.

Tech world: Microsoft has introduced MS-DOS Mobile. This changes everything! ;-) I couldn'tactually download this new OS but Google did something simply clever that works: open Google Maps now. There will be an icon of Pac-Man in the lower left corner and when you click it, you may actually eat the dots in the streets of your favorite city.

And yes, Google also offers you a new version of the physical mailbox that brings the usual e-mail services to the unelectronic edition of the mailbox.

To compete with OneDrive and DropBox, Google introduced a new cloud service, The Actual Cloud Platform which moves your data to the troposphere.
Luboš Motl v 11:11 AM
Share