which is more compatible with the RSS AMSU dataset. In fact, UAH now shows a smaller (by 1/4 or so) warming trend than RSS. The trend has been exactly zero in the last 18 years. In the past, I tended to slightly prefer RSS AMSU – partly because I wanted to avoid suggestions that Spencer et al. aren't impartial just because they're skeptics (I surely do think that they are impartial). I also preferred a more silent method with which RSS was fixing their small bugs. 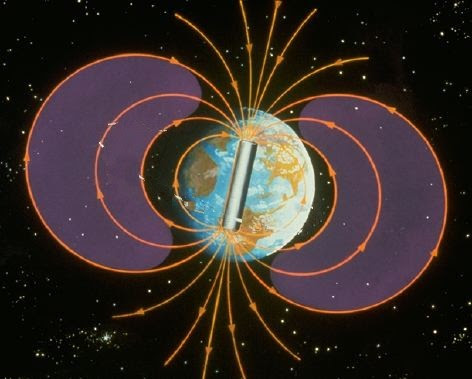 But this new release convinced me to play with the datasets again – do all kinds of Fourier analysis, Fourier filters, predictions, and so on. And I just found something that I want to share with you because it seems pretty exciting.


I looked at the Fourier decomposition, Fourier[b], somewhat carefully, and there were some peaks but they didn't quite impress me (although they already contained the reason of the excitement described below). Instead, I decided to look at the autocorrelation of the data: 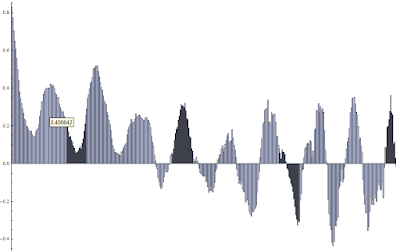 Wow, I told myself. It doesn't look chaotic. The ups and downs are almost regular, equally spaced: it looks almost like a sine function combined with a much slower one.

You should understand the graph. The horizontal axis is the delay that goes from zero to 400 months. The vertical axis is the correlation coefficient that oscillates. In fact, there are 9 periods between the delay 0 and the delay 395 months or so (the number of maxima in the interval is 10 but that's because you count both peaks at the boundaries, I am sure you know how to count periodicities).

So the average spacing between the delays is 395/9 = 44 months or so. To a certain extent, one feels confident that the graph above allows us to determine this constant 44 months rather accurately – so that one may conclude it's much more likely to be 44 than 43 or 45 months, for example. Think about it. The point is that the temperature wiggles are much more similar to those 44 or 88 months ago than to those 22 or 66 months ago.

OK, I could see the periodicity 44 months (3 years and 8 months) in the Fourier decomposition, too. There was a peak around these frequencies. I am just not experienced enough to immediately appreciate that the peaks around this frequency are really high. The similarity between the graph of correlation coefficients above and a sine was something I couldn't overlook.

Here is what I did to "see" the value referred to as 44 months above more accurately. Just calculate the average of the correlation coefficients over all the allowed delays that are multiples of "k" months:


Here is the resulting picture: 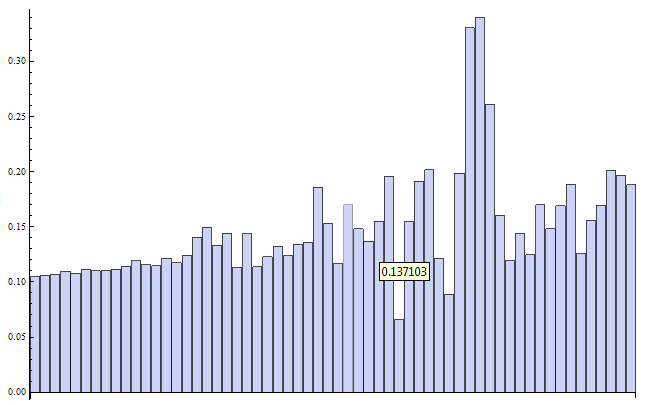 If you count the bars, you will see that the two highest peaks correspond to the delays that are multiples of 44 and 45 months, and the 45-month peak is actually a bit higher. So the periodicity seen in the global temperature anomalies is about 44.6 months or something like that.

Good. We live in the era of search engines so I immediately searched for 44-month and 45-month periodicities that could explain it. First, I ran into an essay by Willis Eschenbach who have Fourier-analyzed the temperature data as well and found the 44-month periodicity, too. So as I could have expected, I had discovered the wheel and America (in my mother tongue, we say that "you discovered America" if you did something trivial that every child and even Christopher Columbus could do, too). In that article, he concludes that the climate data don't show the slightest trace of the 11-year solar cycles and I completely agree with him. The people who believe that these 11-year sunspot cycles have to be critical for the terrestrial climate are fooling themselves.

But he probably didn't do any other search for that 44/45-month periodicity in the literature. I did.

First, I found the following 1997 article. Look at it:


Geophysicists G. K. Rangarajan and T. Iyemori in Bombay have analyzed some Kp and Ap geomagnetic indices between 1932 and 1995. The analysis up to 1961 was done previously; 35 extra years were added by these authors and they seemed remarkably consistent with the lessons of the first 30 years.

In particular, the Ap index – which quantifies some daily geomagnetic activity – shows periodicities of 16, 21, and 44 months. The first two were attributed to the solar wind and IMF oscillations with analogous periodicity while


the 44 month variation is associated with a similar periodicity in recurrent high speed stream caused by sector boundary passage.


Needless to say, my training in geophysics ended somewhere at the basic school – in the college, geophysicists were known as the least smart physicists, on par with the meteorologists. But search for the "sector boundary passage" or, if you know these things, please comment on the meaning.

The same Rangarajan and Araki found the same 44-month cycle in a slightly different quantity, the equatorial Dst index.

The idea that the geomagnetic activity could drive the climate change is intriguing, isn't it? But it gets even more puzzling if you read e.g. the 1933 paper by Abbot and Bond. On page 364, you may read:


Yes, 45 months is there, is a rather limited list. On page 370, they compare the 25- and 45-month periodicity with some climate data, see also Figure 7 on page 369. I don't quite see the "solid science" by which they obtained those 7 golden frequencies but I will later spend some time in attempts to fit the climate into a combination of these seven sines.

On page 366, they point out that 45 months is one-third of the sunspot period of 135 months, and offer some other numerology for the other frequencies. If the Sun itself were the driver, why would one-third of its sunspot cycle (the third harmonic) matter much more than the full cycle? A triangle would probably have to be hidden in the Sun.

Let me stop these solar debates and return to the Earth.

Except for the hypothetical shielding of the cosmic rays, I can't see how the geomagnetic field would drive the climate, either by itself or in some combination with the solar cycles. Or perhaps the wind is (somewhere) charged and moves according to the magnetic fields and it matters for the climate? But because links between the climate and many weird things have been proposed, it seems surprising to me that the possible geomagnetic influences on the climate are not discussed at all.

You may want to know how big changes of the temperature the cycle is generating. I found the strongest (Pythagorean hypotenuse) effect for the periodicity 44.9 months. This is the code:

So most of the year 2015 seems to be in the coolest phases of this cycle. This negative contribution may reduce the warming effect of the El Niño that was recently reborn (and that is predicted to become very strong) on the global mean temperature.

BTW I also calculated the Fourier transform of the GISS data since 1880 and the local peak periodicity was about 43 months even though it looks much less exceptional to me. I couldn't see any waves in the Correlation in the GISS data at all which strengthens the possibility that the 44-month periodic signal is a satellite artifact. Or maybe there's too much noise (inaccuracy of older measurements) in GISS.

Someone else mentions the 45-period in the data and suggests it is ENSO-related.
Luboš Motl v 4:16 PM
Share