Approximately one year ago, the public was getting increasingly certain that Mr Stanislav Gross was suffering from a very serious – and probably fatal – illness. 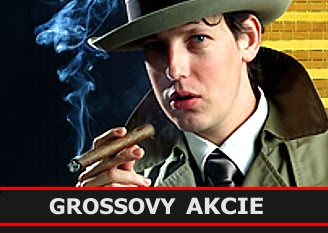 This is actually not a photoshopped image. He allowed to be photographed in this form.

For some time, media speculated he had cancer; or just a minor injury affecting the spinal chord, and so on. At some moment, the picture became rather solid. Gross was tortured by amyotrophic lateral sclerosis (ALS). The neurons controlling voluntary muscles start to die. You can't move, speak, and swallow too well, and at the end, you can't even breath.

I don't know why one can't replace the lung/breathing muscles by mechanical ventilators or pumps of some sort – but I am not a physician.


Stephen Hawking has been predicted to die within a year or so. 40 years later, he is still around. The disease had to stop in some way. Experts were generally saying that Gross was unlikely to be this lucky. And indeed, his deterioration and end were swift. One must mention that in recent weeks, there were also speculations that heavy metals were found in Gross' tissues and he may have been helped to leave but I wouldn't treat these speculations as facts especially because the ALS looked like a solid diagnosis and medicine hasn't seen a patient who developed ALS due to environmental factors.


Since the Velvet Divorce, Czechia has had 12 prime ministers. It's ironic that Gross, the youngest one, is the only one who is no longer alive.

Gross was born in Prague in 1969. For a while, he had a lowly job in the railways. During the Velvet Revolution when he was just 20, he joined the social democratic party. In fact, one could say that this young man was one of the most important folks who helped to restore the status of this traditional "moderate" left-wing party in Czechoslovakia. Shortly after the Velvet Revolution, the resuscitated social democrats had 5% of votes or so; Zeman, Gross, and pals helped to shoot it above 30%.

Between 1993 and 1999, he was working on an academic degree as a lawyer. He was required to do less than ordinary students, people agree – for example, his thesis only had 33 pages – but he has completed it. Between 2000 and 2004, he worked as the minister of interior in Zeman's and Špidla's social democratic governments.

In 2004, at age of 35, he became the Europe's (and our history's) youngest prime minister. His charm and communication skills have helped his meteoric rise. Well, he only "survived" in that job for 10 months.

Václav Klaus who was the president whose formal task was to appoint Gross has just revealed that Gross is often painted as a more superficial man than he actually was. Gross was aware of his limits and of his insufficient experience when he became the premier, Klaus points out, and this awareness is an indication of a certain depth of the people.

Zeman – who was not only a close colleague of Gross' for so many years but also the best man on Gross' wedding – showed much less mercy than Klaus before and after Gross died. I am sorry to say but I think that Zeman's attitude mostly reflects some populism. Zeman isn't quite Klaus' caliber – sorry to say.

At any rate, Gross was removed from the job of the prime minister after some financial scandals. He couldn't explain where he got some $200,000 for his apartment, or something like that, and he was often criticized for nepotism, failure to fight corruption, and similar things. The unexplained money for the apartment are petty if you realize that just a few years later, the miraculous investor Gross already possessed about $10 million in stocks and similar assets.

When he was already very ill, he embraced Jesus Christ. Gross insisted that while he didn't feel that his procedures needed to acquire the huge assets were perfectly ethical, they were totally legal at the moment. You can imagine the kind of insider trading or grey information he got in various ways, or compensation for gratitude, or something like that. Whether he would be jailed today is unknown; he has never been charged with anything.

(Well, Gross actually borrowed about $1 million and bought some Moravia Energy stocks – which had a much higher value in a few years – from a rich guy Mr Robert Sýkora who needed to escape from arguments with a fellow stockholder Mr Tomáš Chrenek. He sold it for almost 10 times the price to Pavol Krúpa, a Slovak entrepreneur, a few years later. Accusations exist that this "lucky story" was just a maneuver to explain profits he had made already when he was a politician.)

The Czech people are jealous like hell and almost everyone is spitting on Gross. It's very ironic because it's the same Gross whom many of them worshiped so much and who significantly helped to preserve the strength of the social democratic party. Well, I don't think that Gross' financial behavior was exemplary and I don't think he was the best politician ever. And his ideology is very far from mine.

But I won't join this parade. First of all, I am not jealous. You may ask and I think that we should ask: What is the financial value of the bad things that Gross has done? How much would he have to pay to clean his record? And what is the value of his life? Whatever the numbers are, I think that the latter figure is greater than the former one.

In other words, one may ask: How much money would a person pay to cure himself from a disease that is going to kill him soon? The answer is that (almost) "all of his money" or (almost) "everything". A fatal disease may kill one no matter how rich he is. I think that death – especially such a clearly premature death – is the ultimate event that erases or (over)compensates all the sins.

Condolences to his daughters and wife. It's really them who is going to enjoy the marvelous wealth – but I don't think that they're too happy about these events, either.

Sadly, Marián Čišovský, a top soccer player who played for the Slovak national team as well as Czechia's best club, my hometown's Viktoria Pilsen, seems to suffer from ALS, too.

Stanislav Gross was mentioned in a dozen of TRF blog posts.
Luboš Motl v 9:03 AM
Share