How to save refugees from drowning? Recolonialization

About 800 refugees – mostly from the black Africa – drowned off Libyan shores. Hot Air argues that this tragedy – much like numerous other harmful events – should be blamed on the U.S.-NATO coup against Moammar Qaddafi in Libya. 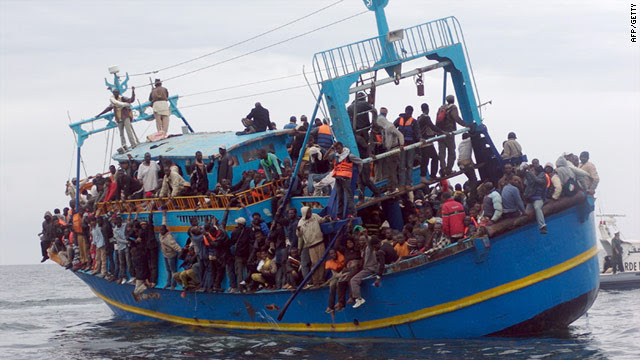 
It seems fair and natural to me for numerous reasons: The target countries see their population density grow, and that's why it should be natural for them to extend their territory for their increasing population, too.

If some organization of the human society (as symbolized by a country) is successful, it should be natural for its influence to grow. And the attractiveness of a society for immigrants is a great and quantifiable piece of evidence that something is good about it.


With this rule – which could become a habit or even a part of the international law – the mankind could get a nice new tool of self-regulation which could direct the world to the self-improving future. Gaia would become more capable of curing and beautifying itself.

The world politics is full of examples where this principle could have been applied – and I do think that in all the cases, the results would have been positive.

During the Cold War, lots of people fled from the Soviet bloc were emigrating to the West. The West could have argued that it had the right to get some extra territory, due to Motl's convention above.

Motl's convention could also be used by Britain to re-establish its control over a part of Pakistan, and by France to re-establish its control over parts of Algeria and other countries. The same convention may be used by Russia to sensibly argue that (approximately) the current territory of Novorussia should be annexed by Russia to compensate the emigration of nearly 1 million Ukrainian citizens to Russia.

I've been thinking about some possible detailed mechanisms how the principle could be converted to particular proposals and enforced but I don't want to annoy you with technicalities.

One of the results would be that the Western countries acquire – and should want and be ready to acquire – some territories in Africa and elsewhere. These territories wouldn't necessarily be treated on par with the original territory of these countries. They could be semi-colonies of a sort. But even this setup could significantly improve the life in those countries.

As kids (and mostly as adults as well), most of us have been been brainwashed by the idea that colonialism is a huge sin and everyone from those former colonies and would-be colonies absolutely despises the idea. But I think that the emigration clearly speaks a different language. There are lots of people over there who would prefer if those territories were governed by Westerners. Try to ask them in a poll.

And it's not just about the Westerners. There are countries – in Africa and elsewhere – that work better than others even though the conditions are very similar. The successful countries of Africa could expand, and the unsuccessful ones should shrink. The drowned people included those from Syria, Somalia, Sierra Leone, Mali, Senegal, Gambia, Ivory Coast and Ethiopia.

Those countries are very poor. The GDP per capita is comparable to $1,000.

But there are other countries that are not so poor anymore. You may see that Nigeria is absent in the list above – although its population is 174 million. You may be surprised but Nigeria has actually become the Africa's largest economy. Their GDP per capita is $3,500 (nominal) or $6,000 (PPP) which is respectable. Nigeria has been praised by the International Monetary Fund for its economy and the successful polls. It's a possible leader of a new BRIC-like bloc in the future.

You should compare Nigeria e.g. with the adjacent Niger whose population is 17 million – but it has the highest population growth rate in the world. Most of the people are young but it is no recipe for wealth as its GDP per capita is $400 (nominal) or $800 (PPP), about 8 times lower than Nigeria's!

Don't get me wrong. I don't believe that Niger's economy may easily become as wealthy (on the per capita basis) as Nigeria's economy. Nigeria's average IQ is 84, Niger's average IQ is 69, a whole one standard deviation lower. The countries may sound almost the same but they are very far from being the same. So much of Niger's economy's inferiority is probably due to other things than the recent unproductive political changes.

But yes, I do think that it's natural that countries that "work" – whatever the reasons are – should naturally manage some issues in the other countries, too.
Luboš Motl v 6:09 PM
Share