For decades, my Australian uncle lived in the Napier Street, Melbourne. I guess that the street was named after a different Napier than John Napier, however.

This Scottish laird of Merchinston (a member of gentry) was known as the Marvellous Merchinston and his education may serve as a good model for everyone. Why?

He only entered school when he was 13 years old. He dropped shortly afterwards. And then, at the age of 24, he bought a castle at Gartness. You may see that Peter Thiel is right when he says that schools are pretty much useless. ;-)


His aristocratic background allowed him to do some very clever and some very weird things, however. For example, he invented Napier's bones, an unusual mechanical device for calculations.


He wrote a great mathematical book, Mirifici Logarithmorum Canonis Descriptio (1614), which contained not only the logarithmic stuff but also an excellent presentation of theorems in spherical trigonometry. He improved Simon Stevin's decimal system and standardized the decimal point, too. That would already be important.

But the most important contribution with "beef" were his logarithms. He introduced the function, the Napierian logarithm, that I will call\[

Well, I think that he was able to see that every positive number is close to an integer power of \(1.0000001\). Integer powers may be calculated by repeated multiplication which is why the question "what is the required exponent to get a certain result" seems to be a well-defined definition of the logarithm even if you only know how to multiply numbers. And the exponent may be identified with the natural logarithm as we know it (times 10 million – a large enough number that he probably chose randomly). 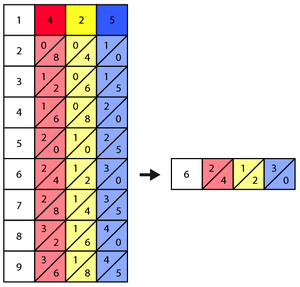 He could have figured out that the dependence on the arbitrary constant \(10,000,000\) may be eliminated by a rescaling and a limit but you know, it was just the early 17th century and he was just a lower aristocrat.

While his original function had the funny linear redefinition involving the constant 10 million, it was "morally" the natural logarithm as we know it. And the letter "n" in the modern symbol \(\ln(x)\) actually stands for Napier, and not for "natural" as people like to say.

We should appreciate how much ahead of time this guy was. The first "serious" discussion involving the constant \(e\) which was called differently,\[

\] is known in letters from Leibniz to Huygens in 1690 and 1691, over 75 years after Napier. And our modern symbol \(e\) has been used from a much later, 1736 book by Euler. Here, we tend to think that \(e\) stands for "Euler" but here the origin is impersonal and Euler chose the first letter of the word "exponential".

So Napier did know quite something about the exponential and logarithmic (as well as trigonometric) functions. Such talented old guys (including the smartest guy of all times, Isaac Newton) often had another face. Napier was a theologian. Well, this noun is a euphemism.

He was as obsessed with some religious delusions as the climate alarmists today. In his 1594 booklet Plaine Discovery dedicated to the king, he urged "justice to be done against the enemies of God's church". The booklet which included some verses was as successful as An Inconvenient Truth. He really resembled the climatic loons who want to punish the "deniers".

Just like the climate nuts, he was also predicting the end of the world based on his analysis of the Book of Revelation. The end of the world was predicted to come either in 1688 or 1700 – 328 or 316 years before the end of the world according to Al Gore. Note that Napier could have been pretty sure that he wouldn't see whether his prediction was right: his age on the doomsday would be 138 or 150 years.

Napier wasn't just a theologian, doomsday cultist, and mathematician. He was also known as a magician and an alchemist and he was very experienced in necromancy (talking to the dead). He never traveled without his magic black spider and was guided by a black rooster who was Napier's "familiar spirit". In fact, this rooster was capable of telling Napier which servant was stealing the employer's assets.

The address of these spider killers is ironic, isn't it? If you need your fantasy to be put on steroids, let me mention that my uncle's address contains not only the same street name but also the same number as the address above. ;-)

It gets pretty hardcore here so let me stop. I would guess that this guy has done some impressive things in mathematics but as his other interests indicate, it was probably because he had lots of time to play, not because of his intelligence. The latter was probably low.
Luboš Motl v 6:17 PM
Share