I talked to the new U.S. ambassador to Prague Andrew Schapiro (and shook his hand) in early November 2014. This Harvard Law School classmate [and fundraiser, $700k] of Obama's is a pleasant chap who claims to enjoy trips all over Czechia and whose task is to spread the – mostly counterproductive – foreign policies of the Obama administration. So I disagree with him that it's right to wage a trade war against Russia; I disagree that the U.S. should be helping NGOs (like "anti-corruption NGOs") that directly influence the internal Czech politics; and I disagree with his and Obama's idea that the Islam and the Middle-East-style terror have nothing do with each other.

OK, but it's not just about voicing opinions. It's been increasingly clear to me that the Obama administration is obsessed with the regime change, including the regime change in allied countries (such as Israel and Hungary) and that my Czech homeland has made it to the short list of the targets, too.

I do admit that I would be less angered if similar things were being done by a U.S. administration I would largely agree with. But even in that case, I would feel a strong discomfort when the U.S. government would be trying to remove the legitimately elected Czech president.


Now, don't get me wrong, current Czech president Zeman is as polarizing a figure as pretty much any visible enough president. Most of my equally old friends and most of younger people in general tend to be against him, and so is largely e.g. my father. Many others are Zeman's supporters of a sort – after all, he did get over 50 percent of the votes in the second round of the presidential elections.

His opponents gathered in Prague (not only but famously) on November 17th, 2014, the 25th anniversary of the Velvet Revolution in Czechoslovakia. These folks were showing "red cards" to Zeman. This witty ritual was supposed to follow the rules of soccer: a "red card" from the referee means that the player should leave the stadium (the player usually gets the red card after a "yellow card" followed by another sin).

However, one should admit that with the cards of this color, Prague looked almost indistinguishable from a communist capital such as Beijing in 1966 – see the picture above. They are quite similar, aren't they?

Despite these communist connotations, the "red cards" technology is arguably cute – it's just another moderately funny symbol of a peaceful protest. You don't need to throw eggs and tomatoes (or ring your keys) all the time. A Czech organizer could have had this idea and he could have printed the red cards for the participants. But did he?

Well, sadly, just a day after the rally, an anti-establishment news outlet named aeronet.cz received the photograph above – click it to zoom in.

(The only high-resolution version of the photograph that I can get – from another source – strongly suggests different "sender" and "recipient" fields than claimed by aeronet.cz so all these details are disputed. And I am sure that the picture is from Brno, not Prague. See the comments.)

The demonstrators are getting the red cards from the cardboard box in the left lower corner. If one analyzes the photograph somewhat carefully, and if one believes the aeronet.cz claims about the analysis, he can determine both the sender and the recipient. Well, the recipient is Ms Šárka Kadlecová. LinkedIn tells you that she has worked for the ministry of foreign affairs and more recently on the U.S. embassy (as a teacher, probably a teacher of the Czech language). She's been also a member of a politically correct NGO named In Iustitia which is funded by the U.S. embassy.

If that's not enough for you, well, you may decode the address of the sender, too – the cardboard box with the red cards was sent from the U.S. embassy in Prague. Well, maybe you think it's OK but I find it troubling. Tell me whatever you want but the embassy of an allied country shouldn't be organizing street protests against a legitimately elected president.

Schapiro and Zeman before the door was closed. The third man from the right is Mr Forejt, the boss of the Prague Castle protocol (whom I first met in Washington D.C., during a lunch with the ex-president Klaus). He's doing his job well – which is why Zeman gladly inherited him from Klaus – but he is often criticized for actively inserting his not-so-skinny body to every photograph of VIPs. Apologies that my chosen picture has presented no counter-evidence to this hypothesis.

In Yanukovitch's Ukraine, much more vigorous interventions of this kind were taking place. Victoria Nuland has boasted that the U.S. has spent a whopping 5 billion dollars to undermine Yanukovitch's government. I am sure that the red cards in Prague were cheaper. But in Ukraine, these interventions "helped" to break the country apart and to start the civil war which has created thousands of casualties and destroyed a third of the Ukrainian economy (and the default is looming). 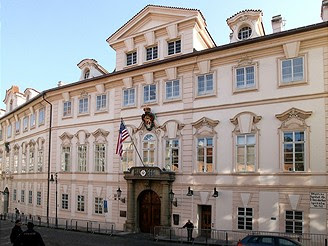 The Schönborn Palace in Prague's Lesser Town. I sadly know the building of the U.S. embassy from about 6-10 long queues when I needed a new visa or their extension of a sort.

I really don't want similar things to occur in Czechia. Ukraine isn't terribly important – whether you like it or not, it is just one highly troubled, underdeveloped, border region in the Greater Russia. But Czechia is a stable Central European country with a long Western democratic tradition. And it is my homeland. I just don't want to allow some clueless foreign jerks to undermine our (inevitably imperfect but our) democratic institutions in a similar way.

Just to be sure, even if these folks had succeeded and overthrown our president, I would probably be extremely angry but I wouldn't go to fight in a civil war. One reason is that I wouldn't be too helpful. Another reason is that your humble correspondent and most Czechs just aren't this involved and emotional. After all, we are used to foreign powers' dramatic interventions into our domestic affairs. They were mostly harmful but they were not "uniformly" harmful and the intervention by the U.S. would hopefully be much less harmful than the intervention by the Third Reich or the USSR. At least I hope so. (You should understand that for each of the foreign powers that have shaped or shapes our destiny, whether those controlled from Vienna, Berlin, Moscow, Brussels, or D.C., there are always millions of Czechs who celebrate the foreign takeover of our internal affairs so the foreign power "only" tilts the political equilibrium in a direction that wouldn't win spontaneously.) So maybe I would have sacrificed Zeman's pride, after all, and anger would be the last reaction I would actively create. But maybe others would react more violently and I would join. You never know what would happen.

At any rate, the excitement about toppling Zeman (and people's obsession with four impolite words he has used in a radio interview a few months ago) has significantly decreased in recent months. I think that it seems very unlikely that someone will topple him in coming weeks or months. It may be more likely that he will have some serious health problems – perhaps related to alcohol or something else. But Zeman must feel self-confident again. At least that's what today's interview with Zeman at the Parliamentary Letters (parlamentnilisty.cz, partly a news server where our lawmakers communicate with each other and the public) suggests.

Schapiro has criticized Zeman for his plans to attend the Victory Parade in Moscow on May 9th (70th anniversary of the Soviet defeat of Germany). The celebration is boycotted by most but not all Western leaders (it's possible that Czechia, Greece, and Cyprus will be the only EU countries with top representatives there, and I can't even guarantee that Greece will still be an EU member; but just to be sure, Merkel will arrive to Moscow just a day later). Today, Zeman responded to Schapiro's views:


I can't imagine that the Czech ambassador to Washington D.C. would be advising to the U.S. president where he should travel. Similarly, I won't allow any ambassador to Czechia to shape the schedule of my trips abroad.
Q: Haven't you considered to invite Schapiro to the Prague Castle so that you could explain your views to Schapiro in detail?
I am afraid that after his statement, the doors to the Prague Castle are closed for Ambassador Schapiro.


It's hard to disagree. A Czech ambassador would be more likely to eat his shoes than to enumerate countries where the U.S. president is not recommended to travel.

Just to be accurate: Schapiro didn't explicitly say that Zeman "should not" visit the Victory Parade in Moscow. He has "only" tried, using Joe Biden's words, to embarrass Zeman into cancelling the trip to Moscow. 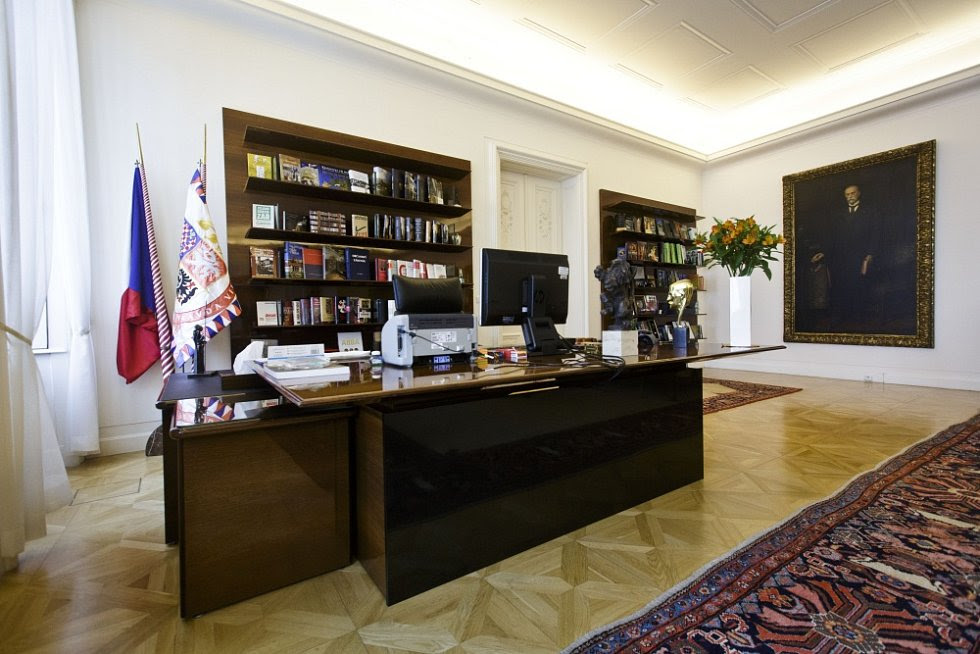 President's office at the Castle during Zeman's reign

Zeman previously said – on his Radio Frequency One show – that his trip to Russia would demonstrate "our gratitude that our country doesn't have to speak German today" and "he will pay the honor to the 150,000 Soviet troops who have paid the highest price" while liberating (90% of) Czechoslovakia. Although some politicians had certain inclinations "not to fund" Zeman's trip, the government seems to have decided to pay for Zeman's visit to the Red Square, after all.

In the interview, Zeman was describing his relationship to Easter (yes, he has already spanked his two secretaries over his knees); his expectations about Zeman's looming visit to the Holy See; his variable opinions about different (ex-)leaders of the Czech Catholic Church; his reasons to think that Islam and terrorism are linked. Zeman avoided the last question whether he considered Russia to be a destabilizing influence in Europe and instead, he said that he and the Czech government (and partly even Obama) agree that it's necessary to maintain both trade and strategic relationships (fight against terrorism etc.) with Russia.

At any rate, whether you like it or not, the "closed doors" indicate that the Czech-American relationships have deteriorated considerably. I assure you that the opinions about Russia, the Ukrainian civil war, Russia-West relations, and many other things are highly diverse and non-uniform in Central Europe but there is no other country that would witness similarly sour attitudes to the top Czech constitutional representatives. And be sure, Zeman isn't the guy who started it.

I have urged Mr Schapiro by Twitter to officially apologize for his highly inappropriate behavior which, as some Czech political analysts said, represented an elementary mistake in Diplomacy 101. Schapiro is spending Easter in the U.S. and his most recent tweet says that "he feels lucky that he has turned his cellphone off".

America seems more involved in the Ukrainian-Russian relationships and similar affairs than pretty much any Central or Eastern European country. It's weird because I am convinced that America should actually be much less involved than any country over here. So please, calm down, my American friends, and don't constantly try to shape the life in faraway countries that you obviously fail to understand.

President's spokesman Mr Jiří Ovčáček tried to downplay Mr Zeman's words. Schapiro may still visit some social events – perhaps a fancy dress party. Some time later, Schapiro responded that he believed that Zeman was one who would appreciate candor and his office's door are still wide open for our president. Whether this asymmetric response matters also depends on the beverages and ashtrays available at the U.S. embassy. ;-) 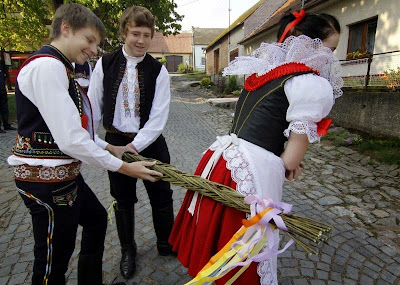