If you can afford to spend 80 minutes, you should watch it. She dances, sings, shows numerous cartoons, and especially lots of physics.


She reminds everyone of the elementary particles of the Standard Model and different distance scales in physics, including the Planck scale which is not far from the size of the string.


You may hear her take on the history of strings – strings vs QCD, extra dimensions, and the stringy explanation of the quantum nature of black holes, especially the calculations and advances done in the mid and late 1990s, including Maldacena's holography. Her goal is to hack Nature's operating system, the UniverseOS. LEGO refers to the construction of black holes out of strings and branes.

Amanda has written lots of very serious and important technical papers on stringy topics (mostly on the Strominger-Vafa "LEGO" constructions of black holes from branes) but I think that she is a pretty good popularizer, too. I've known her as a presenter (at least?) since TASI 1999 in Boulder, Colorado. Ethan Siegel wrote a report about the talk that he attended that was called Strings theory, black holes, and reality.

Questions begin at 1:03:40. An 8-year-old boy string theorist proposed a new analogy to expose holograms and D-branes via our CFT. ;-) Although I didn't quite understand what he was saying (he had some "disagreements" about the counting of the dimensions), it's cool to see the contrast between this kid and some 50-year-old men employed by NASA who are not capable of understanding the momentum conservation law.

The first adult's (online) question was, predictably, Is string theory falsifiable. Amanda presented her viewpoint on what it means to prove a theory. She says that one may falsify the assumptions of string theory, it hasn't happen yet. Also, it's sensible to study seemingly inaccessible realms like ultrashort length scales because we may look at them indirectly. Our ability to observe very long lifetimes of protons – by looking at many protons – is her analogy. She also said that a better understanding or theory may in principle make our current views obsolete in the future.

The first adult's real-life question was by a woman who just read Holographic Turbulence by Adams, Chesler, Liu. Is there a connection between black holes and fractals – the woman loves fractals. Peet says that fractals arise in many different contests, including those in string theory. The power of holography is that complicated (perhaps fractal-like) processes may become uncomplicated in gravity. Attractor mechanisms are mentioned as another nonlinear topic.

Another, a bit older boy, is more comprehensible than the younger ones. If there's information loss in black holes, is there information gain or restoration in the white holes, the opposite of the black holes? ;-) Sophisticated question. A problem is that there aren't really white holes around. They would be the T-reversal images of black holes but those are composed of the same microstates – black holes and white holes are indistinguishable at the microscopic level – and the second law of thermodynamics guarantees that the macroscopic behavior of these microstates is always (up to exponentially tiny probabilities) that of the black holes, not white holes. Amanda also warned him that the white holes are OK solutions but they may be unphysical. She defends a similar point as mine in terms of an instability that "turns" the white hole into a black hole. 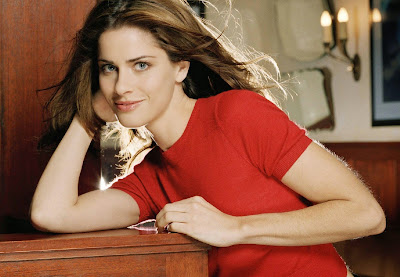 I am sure that she's used to people who post similar Amanda Peet pictures next to her talk announcements etc. The same is true for Michael Douglas and others. My adviser Tom Bhanks was only half-used to such things.
Luboš Motl v 7:22 AM
Share