Oliver Heaviside was born in London on May 18th, 1850. He was short, a redhead, and a sufferer from poor hearing due to scarlet fever in his childhood. Due to the limited support from his parents and the hostility of the institutionalized science towards him, he has never received any PhD and almost no credit.

But he was the Gentleman we must thank to for many discoveries and inventions related to electromagnetism and for the modern notation he introduced.


Although his family moved to a better part of Camden, this top 1% student couldn't have been supported after he was 16 so he had to switch to the status of an auto-didact with no additional formal education. A positive influence came from his non-biological uncle Sir Charles Wheatstone who co-invented the first mass-produced telegraph.

Heaviside worked as a telegraph operator and at age of 22, he published a paper on the calculation of the resistance using several pieces of data in a circuit, an algebraic problem that seemed to hard for James Clerk Maxwell and Sir William Thomson – both appreciated what he did. Heaviside quickly became an enemy of the "big telegraph" guys when he mocked their top engineer-apparatchik. They refused to accept him to the "Society of Telegraph Engineers" claiming that he was just a "telegraph clerk". Thomson's power was enough to beat this resistance, however.


In 1873, he fell in love with the new 2-volume Maxwell's book on E&M, and gradually learned everything he needed to understand it. He cracked the transmission line theory – everything about the inductance, the speed of signals at all frequencies, and so on. Between 1882 and 1902, he contributed 2-3 articles per month to The Electrician, a trade paper. In 1880, he invented the skin effect and patented the coaxial cable in England (I just switched my Internet and TV to UPC, the European counterpart of Comcast, based on this invention – thank you very much, Mr Heaviside).

His contributions to the engineering of telegraphs and telephones were numerous but they had far-reaching implications for the theory, too. His insights made it possible to invent the Cherenkov radiation and the Lorentz-FitzGerald contraction (before relativity was born). FitzGerald was Heaviside's friend. In 1889, Heaviside published the correct derivation of the Lorentz force. In the late 1880s and early 1890s, he worked on theories explaining the electromagnetic origin of mass, a favorite paradigm of numerous top theorists of the time.

In 1891, he was finally named a fellow of the British Royal Society. In 1905, he was given his first doctorate, an honorary one, by University of Göttingen. In 1896, FitzGerald and John Parry negotiated a GBP 120 per year pension for Heaviside. In 1902, he proposed a layer in the ionosphere. After his 50th birthday, this former cyclist's health deteriorated. He became highly eccentric and avoided any contact with the other people. For example, he was sending his papers through the bakery.

I think that the sketch above makes it clear that he understood and was deeply interested in pretty much every aspect of electromagnetism – engineering ones as well as the purely scientific ones. I think it's sensible to say that his overall achievements could have made him deserve the Nobel prize – although I am not quite sure what the single "bombshell" discovery justifying the award would be.

When it comes to the theory, what he did was extremely important, too. He was really the man who wrote Maxwell's equations in their modern form. This required him to independently formulate vector analysis and reduce the messy list of 24 equations into the 4 equations we know and love.\[

\] Yes, he wasn't just some "another guy" who invented some "alternative form" of the equations. He was the father of the most widespread notation we use today, including the nabla, the crosses, and similar things.

It seems natural to think that such an auto-didact is the optimum kind of a guy who invents notation that is going to be adopted by almost everyone. His notation is just so convenient. He had to optimize it because he was learning all the things by himself – without facing anyone who would force him to make things more complex than they had to be. The ability to express the equations clearly was clearly his heavy side. 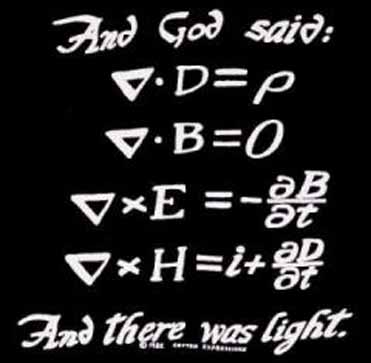 But he didn't just give us notation for existing mathematical objects. He also defined new ones, such as the Heaviside step function \(H(x)\) or \(\Theta(x)\) which is zero for negative numbers and one for the positive ones. Its derivative is the Dirac \(\delta\)-function and Heaviside originally coined the function to describe currents in circuits – you press the button at \(t=0\).

Some of his contributions had something to do with "very practical but intrinsically pure" mathematics. He discovered the cover-up method to determine the coefficients in the partial fraction decomposition of rational functions.

And he was also the man who introduced the complex numbers to the analyses of electromagnetic phenomena and especially the circuits. Do you know all this notation with complex values of currents and voltages and resistances to remember all the phase shifts etc.? He did it for the first time. These insights evolved into the mathematical description of electromagnetic phenomena in terms of the Laplace transform, something that every modern electrical engineer knows very well. He coined about 9 words including "impedance" and "inductance".

Religiously, he was a Unitarian, but really one who wasn't quite religious because he made fun of the people who believed in a supreme being.

Heaviside was an example of a heavily underrated driver of progress. In fact, he has been so underrated that this is the first blog post on this whole blog where I wrote his name – although you find three comments in the archive (by Nigel, his fan, and by John Archer) that mention the contributions by this man.

Throughout most of his life, he was chronically poor but he still refused rather lucrative offers by AT&T who wanted to pay him nontrivial amounts of money for his rights. He died in Devon, West England's seaside, at age of (almost) 75.

Today is also a birthday of eminent British philosopher Bertrand Russell (1872), a linguist, a logician, a metaphysician, the discoverer of the paradox in Cantor's set theory, a warrior against totalitarian systems, and a popularizer of Einstein's relativity, among many other things.
Luboš Motl v 3:31 PM
Share