Three Islamist attacks took place today. Some injuries in a mosque Kuwait, a beheaded manager in a U.S. company in France; and 28 or more people shot at a beach in Tunisia.

Beheading looks scary but I am obviously much more shocked by the Tunisian beach. I/we have been to Tunisia twice, in Summers of 1997 and 2008. I think we were in Sousse – the place of the attack – in 1997. And it was certainly Tabarka in 2008.


The country has been one of the most standard paradises for European tourists. In fact, Tabarka hosts so many Czech tourists that Czech is the third most important language in the city, after Arabic and French (sorry, Yankees).


At the official places, we would see the portrait of Ben Ali, the local strongman: 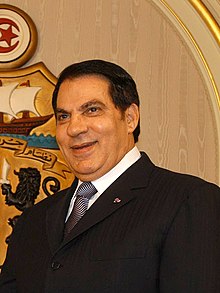 We could travel to various places – Sahara (on camels), the local colloseum, and so on. After some commodities, tourism is one of the most important industries in the country.

Ben Ali surely wasn't a democrat "internally" but he did what was almost certainly needed for the country to be "externally" compatible with the world – much like Mubarak or Qaddafi. The country was safe – and some extreme policies were a part of it. For example, the locals were not allowed to possess fancy knives. When we showed them a nice Swiss Army knife, they were impressed and ready to pay a lot of money for them but told us that they were not allowed to do so.

Americans who love their guns must think that it was a brutal violation of the freedom of the citizens. But it was good and perhaps necessary for the safety – and for tourism, too. Tunisia was the first country that started the "Arab Spring" anarchy. What we got in Tunisia was better than the results in other Arab countries. But the attack is a hint that things aren't as safe as they were during Ben Ali's reign.

Don't get me wrong. I don't think that the number of tourists who have already been killed is too high. But I do think that there's a high enough probability that quite suddenly, these countries will see a transition to a much more violent era. I can imagine that at some point, 10,000 Western tourists will be simultaneously killed across the Muslim world. It doesn't seem hard to me to organize such an attack.

The shooter in Charleston was (or is) a terrible creature. But such people must operate individually in almost all the cases. What makes the attacks in the Muslim countries (which marginally includes France) more likely is the widespread support for jihad. You know, it's perfectly possible that a majority of the citizens and Muslims oppose such violent acts.

But those who endorse it still form a scarily large group. One may ask many questions. In the U.S., Muslim citizens were asked whether they wanted the Sharia law to be introduced in the U.S., at least as an option. A majority answered Yes! And what if America doesn't allow Sharia to be established peacefully? Well, one in five U.S. Muslims want the Sharia law to be introduced by violence! The percentages may be similar in European countries – where (in some countries) the overall percentage of the Muslims is much higher than in the U.S.

One-fifth of a population is a minority but it is not one that you could ignore or neglect. Most of the inhuman regimes that the world history offers actually became temporarily irreversible at the moment when the proponents of the new aggressive ideology reached 20% or so. This is close to the critical percentage that is enough for a sufficiently determined group to take over.

These people don't care about their country's tourist industry – and about the heritage (or pyramids), either. Just imagine what may happen if 20% of your compatriots effectively endorse violence against the "infidels" (even though most of them don't want to actively work on it). It means that if you ask a guard on a beach to cooperate, you have a 20% chance to hear "OK" as his answer.

You may have a jihadist at the chair that decides who is guarding the beaches and sightseeings. If that is the case, he may plant terrorists at many places. There may very well be a plan to strike a coordinated attack against Western tourists at noon of July 4th. We like to talk about the ISIS as the group that poses such threats today but it's just one name of a group that will hopefully be defeated. But the very meme that Muslims should try to achieve things like that will probably not die. The Islamic State is a culmination of similar movements that has thrown all the would-be peaceful parts of the image and the mission. It's a no-nonsense killing machinery designed to spread hardcore Islam. And because a dozen or dozens of percent of the Muslim population agree with such views, one just can't feel safe.

The very self-confidence that the radical Muslims could have acquired in recent years is a big problem. This shouldn't have happened. Needless to say, I think that extremely unwise U.S. policies that have used the Islamist terror groups as "wild cards" against some less unhinged politicians and groups – that were actually the main enemy that the U.S. recognized – must be partly blamed for the rise of the Islamic State and others.

An ethical and responsible politician should simply not fund groups like the Islamic State. It is immoral and dangerous. If you decide that e.g. Assad is your enemy and you support groups like the ISIS to fight against such an enemy, well, then you are probably worse than Assad himself and your stories about Assad's being a devil are just fairy-tales meant to mask what kind of a jerk you are.

And yes, it's mostly other nations – not Americans themselves – who are paying for these interventions. It's mostly European tourists that will have a problem in Tunisia and elsewhere. And it's Europe that is facing the immigration wave from Africa. A part of it is from Libya and it wouldn't take place if Qaddafi were allowed to continue. By the way, the EU agreed on a plan to distribute the refugees on a voluntary basis. I don't understand the precise rules – some Czech opposition politicians suggest that it won't be as voluntary as it claims to be.

By the way, the EU has revealed its plans to sink the (empty) ships used to smuggle the refugees to Europe. The new leaders of Libya have responded that they will be shooting down the European airplanes that will try to do such a thing (at least in Libya's territorial waters). Wow.

For the situation to become safe again, there have to be strong enough leaders and regimes that will simply reduce the self-confidence of the Islamists again. When I think about it, it seems clear to me that what I consider realistic yet optimal is not much different from the likes of Mubarak or Ben Ali or Qaddafi (and maybe even Assad and Saddam). It simply was a very stupid decision of some Western politicians to support the elimination of these leaders. The Middle East and North Africa got messier than they were before. And what they were before was already arguably worse than what our grandfathers remembered from the colonial times.

The evolution in that part of the world has been going in the wrong direction for quite some time. This region is generally not ready for democracy. More precisely, democracy in that context is likely to produce worse results than the moderately enlightened strongmen.
Luboš Motl v 7:28 PM
Share