Referendum about survival 5 days after death?

During the night, the world has learned about a shocker. It is the first one among the "unpleasant and unexpected Greek surprises" the world may face because it was incapable of forcing Greece into formal bankruptcy at a moment chosen by the creditors – not by Syriza.

A model of Greece's behavior in coming days or weeks

Alexis Tsipras scheduled a referendum about the creditors' proposals on July 5th. If the date were different, it could be interpreted as an effort of the cowards to get rid of their duties and their responsibility. With the referendum, they could say: It's the nation who screwed itself, isn't it?

However, the problem is that the referendum is supposed to take place on July 5th. Unless Syriza 100% surrenders in about 80 hours – and it's been suggested that the actual time that remains is shorter – Greece will be in the IMF arrears since July 1st.

By the IMF rules (although not by the rules of the rating agencies), it will be in the state of bankruptcy. The European Central Bank will be forced to withdraw the support for all the Greek commercial banks. Those will collapse. The country will completely run out of hard cash. The circulation of the hard currencies will stop.

The country will be effectively out of the Eurozone whether or not the elimination will be formally announced by that time.


So how can one organize a meaningful July 5th referendum about the decisions that are needed before June 30th? It's clear what they plan to achieve with this theater. They want to get billions of euros again with no strings attached. They will offer an option – to remain a member of the Eurozone, to receive nearly infinite pensions, public wages, and hundreds of other advantages, and to have no duties.


Lying Bolshevik hooligans led by Tsipras (and almost all other Greek politicians before them) have made these promises many times in the past and the Greeks have proven many times that they're totally willing to buy these cheapest imaginable lies. They will almost certainly do so once again if they get the opportunity.

But the laws of mathematics and physics – which are constrained by the will of those who actually have the money – don't allow any such option. The very suggestion that this is an option is a giant lie, the kind of giant lies that define communism and other left-wing ideologies. Everything in Nature has some strings attached to it – especially the D-branes. ;-)

They must understand that according to the current situation, this referendum question will no longer be relevant on July 5th because Greece as a well-defined economic entity will have been dead for 4-5 days at that moment and it will be next to impossible to "reverse" the damage that will have occurred in Greece and "return" the conditions to the current ones. A July 5th referendum about "which politicians should be turned to steaks for many Greeks to survive for another week" will be more appropriate. Why do they think that it makes sense to organize this nonsensical theater, anyway?

Moreover, the Greeks can't vote about any particular plan – because their amateurish government hasn't been able to converge to or agree about anything of the sort. So the voters can't possibly be offered any option that assumes that Greece will stay in the Eurozone; and is acceptable to the rest of the Eurozone (and EU).

It is clearly another attempt to blackmail the lenders through the P.R. manipulation, the only thing that the Syriza scammers are good at. If you won't pay us billions of new euros with no strings attached, you will be preventing a holy ritual of democracy, a referendum. So you have to pay the ransom to us again. Cute.

Even Angela Merkel who has a crush on Tsipras has told him to shut up. If these bastards weren't completely incompetent, they should be told "Shut up and calculate" but that would be too much to ask in the real world.

I hope that Merkel et al. will use even stronger words now and they won't allow this circus to continue. The Greeks have already made a choice – they picked a lying bunch of communist hooligans from anti-capitalist rallies who promise the impossible all the time and try cheap Nigerian tricks to get money from foreigners for free. It is a wrong choice and now it's finally time for the Greeks to taste the fruits of their wrongest decision and suffer.

All Western nations need to see this suffering. But it's primarily the Greeks who need to go through lots of this suffering for them to have a chance to become something more than a pile of deluded lazy crap sometime in the future.

A technical bonus comment: I can imagine that the ECB will "overlook" the IMF default for those 5-6 additional days before the referendum is evaluated. But even with the maximum support of the ECB, I can't imagine that the financial system of Greece will be OK up to July 5th despite the June 30th IMF default. The withdrawals will become nearly absolute and the ELA limit will be breached, anyway. Capital controls will have to be enforced (the Alpha Bank already stopped online money transfers a few hours ago). Very long queues in front of all ATM machines have finally emerged today. And other things will take place. Even if the Greeks decided to accept the lenders' proposals at that moment, I think that the lenders would no longer be offering these generous conditions at that moment. Greece will already have to reduce the spending much more than the generous plans assume now – whatever the referendum result will be.

Unless somebody will be willing and able to change the laws of physics, Greece will go bankrupt in less than 80 hours and it would be utterly irresponsible for the European leaders and top bankers not to be planning the policies for the default and Grexit which are around the corner. Now. Immediately. Their duty is to protect the safety and prosperity of the economies of European nations, not play unwinnable games with an unsaveable, untrustworthy, unproductive, and irrelevant country in between Europe and Africa.

Saturday afternoon update: lots of things have happened up to this moment. I was working hard to make sure that most finance ministers start to work on the Plan B – and the results seems to be the desired one. My most amusing exchange was probably one with Varoufakis' spokesman:


Open Europe: Slovak FinMin Kazimir asked "what do you expect from Varoufakis today?", says: "The same, the lecturing". #Greece
Raoul Ruparel: Have always said #Varoufakis speeches to #Eurogroup read like econ prof lecturing students. Not surprised not liked.
Dimitris Yannopoulos (spokesman): "Lecturing" is a common excuse for shrugging off well-supported arguments that participants are unable to refute. @RaoulRuparel @OpenEurope
LM: @DimitrisY Please, every other 10-year-old Czech or Slovak schoolkid knows how to refute Varoufakis' ultra-Marxist crap.
Dimistris Yannopoulos: @lumidek Then why don't you send them to the Eurogroup or EU summit instead of your incumbents who can't?
LM: @DimitrisY Good idea. But what matters is that the inarticulate ministers agree with the kids that it would be insane to send you new cash.


Now, the five months of meaningless talks trying to avoid Grexit remind me of the decades of critics' babbling against string theory or (Copenhagen) quantum mechanics. It really takes 5 seconds and 1 line of text to correctly answer the Grexit question. "Grexit? Yes, thank you. Good bye. 19-1=18. Done." ;-) Ingenious solutions are often simple. Too bad that the EU folks were not smart enough to be able to read this blog back in January. That could have saved quite some time.

Around 17:30 Prague Summer Time, I was actually impressed by the monologue of Jeroen Dijsselbloem, president of the Eurogroup (Dutch finance minister) during a presser. Great English, clear sentences, comprehensible summary, funny remarks about Greece's being moved to a footnote (Varoufakis disagrees with a statement by the Eurogroup 18), explanation why it's hard, optimistic plans to keep the Eurozone OK after the expiry of the program on Tuesday night. He also professionally said "no comment" to the question "what the silly referendum 5 days after the Greek death will be about": ask the Greek government. And will ELA be withdrawn? "Ask ECB, it's an independent bank". He also made it clear that as long as it exists, the Greek government will in no way get rid of its debt – its obligations. 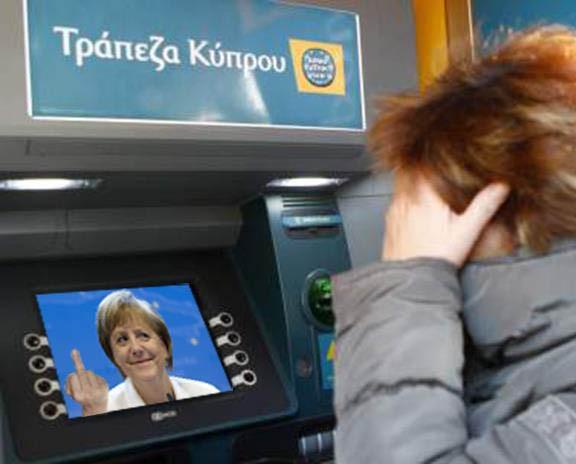 Some Eurozone folks seriously think about stopping ATM machines across Greece. The lenders and the ECB would stop bleeding cash that they won't see for a very long time.
Luboš Motl v 8:24 AM
Share