First, off-topic: You may pre-order a book by Lisa Randall that will be out in 3 months (4 formats). It argues that dark matter is composed of organs of dinosaurs who were labeled reactionary autonomous intelligent weapons and shot into the outer space by mammoths. Well, I know the theory and the very interesting wisdom and stories around a bit more precisely than that because of some 50-hour exposure but there has to be a surprise left for you. ;-)


The ATLAS' bump at \(2\TeV\) or so – possibly a new gauge boson – is probably the most attractive excess the LHC teams are seeing in their data. However, Pauline Gagnon of ATLAS has ironically pointed out another pair of cute excesses seen by her competitors at the CMS:


The bumpy road to discoveries


Here are the two graphs: 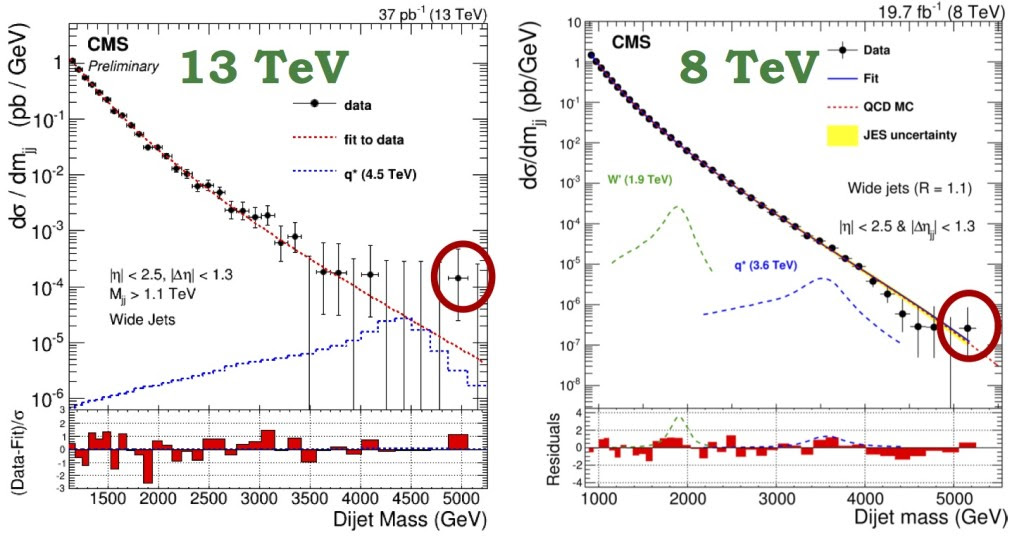 Both graphs show the invariant masses of dijets – a dijet spectrum.

I haven't known about this fun \(5.15\TeV\) event. It only appears in 8 or so uncited experimental articles – and the first article was written by E. Quark and R.S. Graviton, pretty famous experts. ;-) If you search for 5.15 in the paper by Fitzpatrick, Kaplan, Randall, and Wang, you will discover \(5.15\TeV\) in a numerator of a numerical formula for some \(S\) which is hopefully just a coincidence. ;-)

One must always realize that small statistical flukes may occur by chance. But one must be doubly careful if they occur at the highest-energy bin – more generally, in the last point(s) in the graph – because those tend to be the most unreliable and noisy ones. In his popular book, Feynman recalled how he and Gell-Mann knew that the experimenters were wrong when they thought that they had falsified the F-G (Feynman-Gell-Mann) A-V theory (axial vector minus vector) theory of the weak force:


I went out and found the original article on the experiment that said the neutron-proton coupling is T [tensor], and I was shocked by something. I remembered reading that article once before (back in the days when I read every article in the Physical Review—it was small enough). And I remembered, when I saw this article again, looking at that curve and thinking, “That doesn’t prove anything!”

You see, it depended on one or two points at the very edge of the range of the data, and there’s a principle that a point on the edge of the range of the data—the last point—isn’t very good, because if it was, they’d have another point further along. And I had realized that the whole idea that neutron-proton coupling is T was based on the last point, which wasn’t very good, and therefore it’s not proved. I remember noticing that!

And when I became interested in beta decay, directly, I read all these reports by the “beta-decay experts,” which said it’s T. I never looked at the original data; I only read those reports, like a dope. Had I been a good physicist, when I thought of the original idea back at the Rochester Conference I would have immediately looked up “how strong do we know it’s T?”—that would have been the sensible thing to do. I would have recognized right away that I had already noticed it wasn’t satisfactorily proved.

Since then I never pay any attention to anything by "experts." I calculate everything myself. When people said the quark theory was pretty good, I got two Ph.D.s, Finn Ravndal and Mark Kislinger, to go through the whole works with me, just so I could check that the thing was really giving results that fit fairly well, and that it was a significantly good theory. I'll never make that mistake again, reading the experts' opinions. Of course, you only live one life, and you make all your mistakes, and learn what not to do, and that's the end of you.


Amen to that. But in different situations, the bumps may be more real than in others. ;-)

By the way, at least two supersymmetric explanations of LHC excesses were posted to the hep-ph archive today. Well, one of them is a SUSY explanation and the other is a superstring explaining. ;-)
Luboš Motl v 7:27 AM
Share