Greece should rent Crete to Eurozone for 100 years, €325 billion

In the morning, it seemed extremely likely that the new Greek proposed €53.5 billion bailout was going to be accepted. Positive voices were heard from the EU and IMF authorities. However, the finance ministers who discuss the issue tonight are much less enthusiastic.

For example, Slovak finance minister Peter Kažimír has said that the proposal reminds him of a time machine. It would have been good for the completion of the 2nd bailout but it's probably no good for a 3rd bailout because the economic conditions continued to further deteriorate, as I have often warned. Moreover, the program is too complicated, contains too many details, and one can't really trust the current government – and later governments – that they will successfully realize it. It has never worked too well in the past.

It's time for an ingenious simple solution, right? Something that will allow minister Euclid to square the circle. The title is enough to solve the problem. The Greek government debt will be totally erased (those who will acquire an island for 100 years will be given the task to repay all currently existing Greece's debt obligations in the near and distant future), years of the Greek frustration about the debt that is so hard (for them) to repay will be over, and the creditors will get a fair (I think) compensation.

With no public debt, Greece should regain the access to the bond markets. But I expect those markets to be more careful than before.


I am not the first one who advocates the Greek sale of islands; in 2011, German MPs said a similar thing and the Greek public began to boycott German products (unfortunately, this boycott didn't work too well because since 2011, they have still imported more of the German products than any other nation!). However, I will be a bit more specific about the plan so that the finance ministers who read The Reference Frame may quickly sign it tonight, erase the €325 billion problems in the following minutes, and transfer a few billion to Greece tomorrow. ;-)


The solution is simple. The Eurozone countries – in the same percentage by which they contribute to the EFSF fund – will temporarily rent the island of Crete from Greece. According to the modern regional arrangement, Crete is one of the 14 top-level subdivisions of Greece.

All the private ownership in Crete will be respected but administratively, the island will turn from a subdivision of Greece to the Free Associated Eurozone State of Crete (FAESC). Imagine that its status will be similar to that of Puerto Rico within the U.S. Collectively, the Eurozone governments will manage the territory in an analogous way in which any other country is managed.

In particular, the Eurozone will collect taxes over there. Greece's tax revenues are about 30% of the GDP and this will be the case in Crete, too. A part of the tax revenue will be used to serve the island and its citizens. A part of the tax revenue – a fraction that will initially be low but will increase – will be transferred to the Eurozone, effectively to repay the debt that has been fully forgiven. Crete will be a corporation whose stockholders are the Eurozone countries and they will be able to pay themselves some dividends.

Because of a better management – by the Eurozone – I expect the growth rate in Crete to be faster. But in average, 10% of the GDP in the next 100 years may be used as "profit" for the Eurozone.

There will be free movement of people between Crete and mainland Greece. People from one side will be able to apply for asylum on the other side. The Eurozone promises to adjust the taxation level – and/or the percentage of taxes that are extracted from the island – at the right levels so that the number of residents of Crete remains between 5 and 6 percent of the number of residents of Crete+Greece. However, the Eurozone's corporation will be allowed to establish policies that will attract talented and productive Greeks and repel Greeks who need more aid. Also, the Eurozone promises that it will keep the Greek nationals above 90 percent of the population of Crete and the Greek language as the #1 official language of FAESC.

The Eurozone reserves the right to execute the (Marxist and other) guerillas who would try to threaten the new temporary arrangement. The Parliament of FAESC will only have the power to issue laws in subjects allowed by the stockholders.

10% of the GDP of Crete is €1.1 billion per year and this figure multiplied by 100 is just €110 billion, less than the €325 billion debt that this island transaction is supposed to compensate. But due to the better management of the economy, the real GDP growth rate of Crete will probably exceed the real interest rates (which have been near zero for quite some time) by 1.6% or so. This rate quintuples the real economy in 100 years. The average is approximately 3 times the initial economy and 10% of that is close to €325 billion. 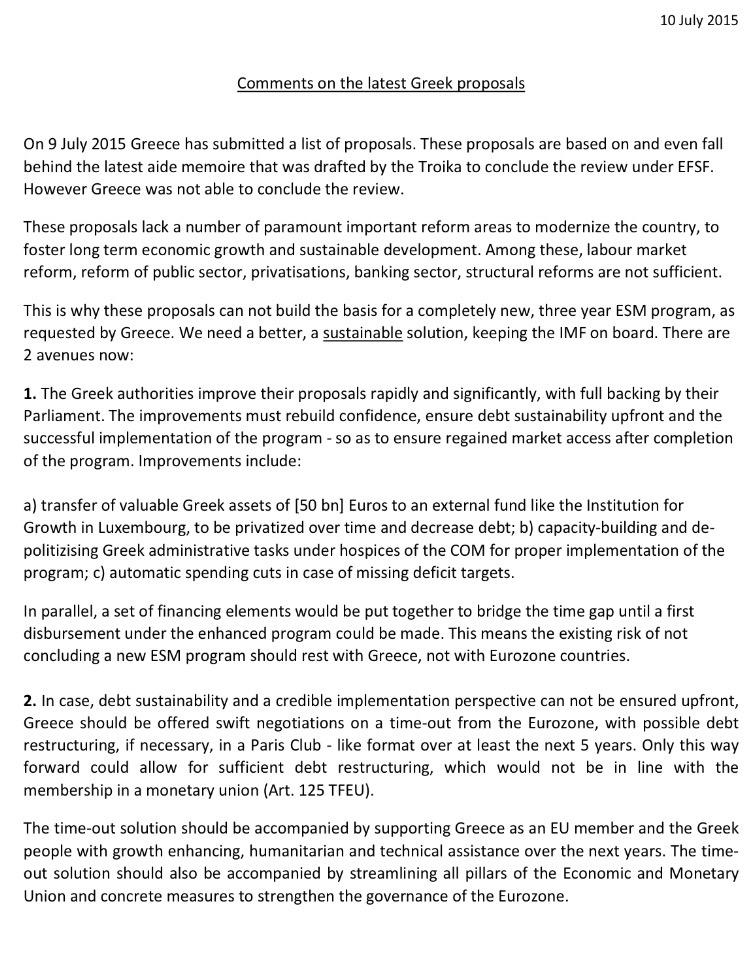 Wolfgang Schäuble has distributed this one-page set of options on Saturday. Either the Greeks will dramatically and quickly improve the proposal and their Parliament will cooperate; or Greece should leave the Eurozone "temporarily" – perhaps for 5 years – and outside the Eurozone, things like debt restructuring may be considered.

It is impossible to estimate any of these things exactly. Generosity is absolutely needed on both sides. If the actual profit of the Eurozone over the next 100 years will exceed those €325 billion (plus expected interests one would get elsewhere), good for the Eurozone. If the profits from the 100-year usage of Crete will be lower, bad luck for the Eurozone. Mainland Greece won't be responsible for the disappointing profits of the Eurozone coming from Crete; and it won't have the right to be paid the excess earnings if any.

In 2030, the population of Crete may look more sophisticated, skillful, competitive etc. than the population of mainland Greece. This fact may be attractive for other Greeks – much like West Berlin was attractive for East Germans. However, the negative part of the story is that a higher portion of their income will be used as the "debt repaying" portion of the tax revenue, something they don't benefit from. By construction, the positive and negative features of Crete will cancel so that the population of Crete stays at 5.6% of Crete+Greece and there's no asymmetric migration in either direction.

Note that the higher GDP growth rate and improvement of life will take place in mainland Greece, the lower amount of money will be sucked by the Eurozone out of Crete (because with too high outflows, there would be emigration from Crete to the promising mainland Greece). On the contrary, if mainland Greece works badly and is clearly inferior relatively to Crete, it will allow the Eurozone to extract a higher percentage of Crete's GDP as the profit. So Greece will be even more strongly encouraged to manage its economy well.

The transition of the power will begin on Tuesday, July 14th, 2015, in the morning. On Sunday, July 14th, 2115, 7 am Prague Summer Time, Crete will be formally returned to Greece (like Hong Kong was returned to China). Let's hope that the Greeks in 2115 will promise to keep some of the more genuine capitalism that will have arisen in Crete – much like the Chinese (partly honestly) promised a similar preservation after they grabbed Hong Kong from the U.K. in 1997.

Simply clever. Thank me for saving the world. You're welcome. ;-)

Some details about the deal may be missing in this blog post but there's a whole Sunday evening to articulate all these details. To rent an island for 100 years is no rocket science let alone string theory.

(Note that Greece could have "sold" the island but I decided that temporary status is more psychologically acceptable and may pretty much play the same role. The basic rules seem simple but it's just an estimate that Crete could be the "right area" to satisfy both sides. If this estimate is wrong, both sides may perhaps agree about another – larger or smaller – territory. Crete was discussed for the sake of clarity. Also, any remaining top subdivision will be allowed to call a referendum whether they want to join FAESC whenever they collect 100,000 signatures. In that case, the whole FAESC will be treated as a corporation of the Eurozone, with a part of the tax revenue going to the Eurozone.)
Luboš Motl v 6:30 PM
Share