In 863, Greek brothers made Slavs literate

Congratulations to the American readers – 50% of the TRF community. It's The Independence Day, July 4th. This day is followed by two Czech national holidays, July 5th and July 6th.

On July 6th, 1415, i.e. 600 years ago, top Czech Catholic priest, master at my Alma Mater (Charles University), and early church reformer Mister John Huss was burned at stake during the Council of Constance. The top European Catholic apparatchiks didn't like that he has loved the truth and articulately criticized them for their hypocrisy, excessive wealth, double standards during masses, and bureaucratization of the church.

Huss is also the author of the (early version of) Czech diacritical signs (as in "žluťoučký kůň šíleně úpěl ďábelské ódy" which means "a yellowish horse was terribly moaning devilish odes") which became the standard script in the Czech lands, Slovakia, and the Yugoslav nations. The judicial murder led to the Hussite Wars, an era in which the Hussites – terrorists who were his self-appointed followers – were establishing communist cities, plundering Europe, constructing "simply clever" new kind of weapons, and singing combat songs that made the Germans šit into their pants. Most Czechs are proud about the Hussite period that ended by the Hussites' 1434 defeat at the Battle of Lipany.

The Pope and the German president recently apologized for the judicial murder of this "heretic" and offered us 1/2 of the Vatican and all of East Germany as a modest compensation.


The 600th anniversary is round but I want to spend more time with the July 5th event, the 863 arrival of the principal Christian missionaries among the Slavic nations, Saint Cyril and Methodius, to Czechoslovakia.


At that time, the Slavic tribes were pagans who spread over parts of Europe. Almost none of them had any form of statehood to talk about. The exception was Great Moravia, basically the old name for Czechoslovakia in the 9th century. It was our homeland and a pretty prosperous one. I am sure that the Great Moravians have never protested against the name "Czechoslovakia" for their country which is why I use it. ;-)

Cyril and Methodius were two Greek brothers from Thesallonica, the Byzantine empire (at least until the 2015 default, the city belonged to the Hellenic Republic). These guys arrived to Great Moravia and didn't quite know what was expecting them. 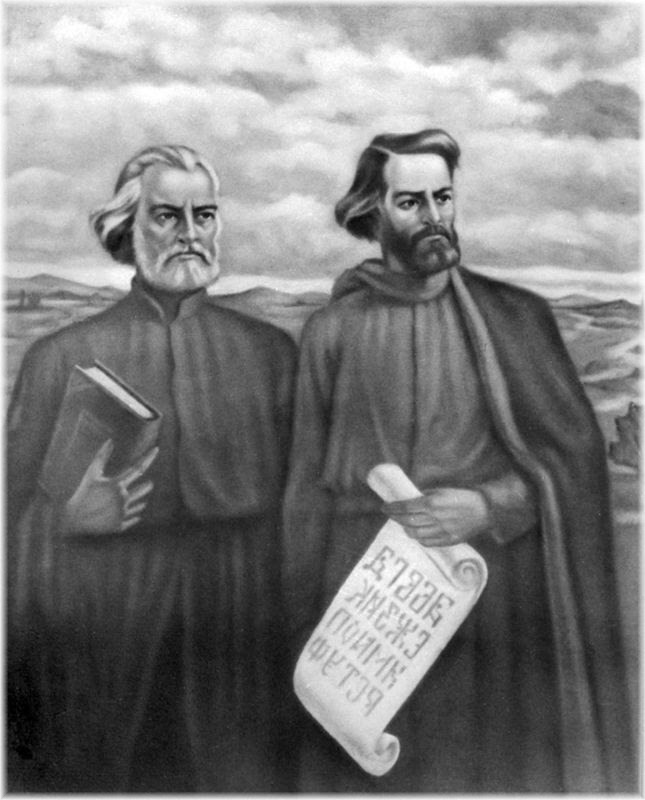 But things went fine and they sold their Orthodox Christianity in our lands. (They repeated the success later on the other Slavic nations, those without real statehood.) In our case, the Orthodox Christianity survived for about a century before it was largely superseded by the Catholic influence from the German-speaking realm.

The brothers brought us various prayers which were translated to the local language. Those who don't care about religion may want to know that they brought us writing, too. (There exist speculative theories that Slavs used some proto-writing before that, however.) Well, they could have taught us the Greek or Latin alphabet – and perhaps slightly adapt them, like Huss did later, to make them more compatible with the Slavic sounds. 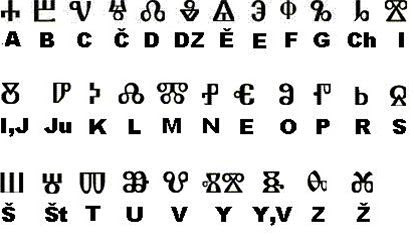 Instead, these brothers wanted to be wise guys and invented their own alphabet, the Glagolitic alphabet. Its letters look almost nothing like the Greek, Cyrillic, or Latin alphabets.

You may have noticed one word in the previous sentence. Cyrillic script, the Russian alphabet, seems to be named after Saint Cyril as well – and it indeed is. This script was created later as a superposition of Cyril's (and Methodius'?) Glagolitic alphabet and the Greek alphabet. Originally, it contained numerous Glagolitic-like characters but they were getting eliminated which is why the modern Russian alphabet looks much more similar to the Latin alphabet than the Glagolitic alphabet. But you may see that e.g. the Russian letter for "š" or "sh", the squared "W" of a sort (if you can't see this symbol "Ш" for "ša"), was imported from the Glagolitic alphabet to the Cyrillic script.

The Glagolitic letters are quite different. Almost all of them seem excessively redundant – they have either an up-down or left-right reflection \(\ZZ_2\) symmetry. This means that the letters occupy up to 2 times larger space than necessary.

Škoda's logo is rather rare because it doesn't possess any \(\ZZ_2\) symmetry, so there is no redundancy. You know, symmetry is pretty but redundancy is wasteful. ;-)

The 9th century Greek brothers wanted to improve their descendants' financial problems so 3-5 of the letters look like variations of the symbol for the Euro. First, the simple mirrored Euro symbol – and I am not joking, it was really slashed twice back in the 9th century, just like the modern Euro symbol – was the sixth letter of the alphabet (according to the modern sorting) and it was referred to as "yest'" ("exists") – even though modern Greeks would be more likely to call this mirrored € letter "doesn't exist". ;-)

These four additional letters – arguably excessively contrived ones – are known as ensj, jensj, onsj, jonsj (or "small yus", "small iotated yus", "big yus", "big iotated yus") and they may be read as symbols of the Euro in several parts of the Eurozone when it splits to many pieces and these pieces are re-merged in various ways. Perhaps, the symbols will be reused as the "Cretan Euro", the "German-British Euro", the "Northern Euro with extra telephone credit", and the "Greek Euro subsidized from Turkey".

You may see that particular people in a relatively recent era (863 AD is not such a long time ago) were playful and could invent new nonsense such as a new alphabet (one doesn't necessarily need millions of people and a complicated history to explain the origin of an alphabet) and you may also verify that despite the accolades from the Christian churches, they were amateurs because the letters were unnecessarily complicated (and unnecessarily symmetric) and that contributed to the unstoppable disappearance of this alphabet.

On July 5th, 863, Greeks made us, the Slavs, literate. I want to repay the debt. So I propose speedy steps for the situation when the Sunday July 5th, 2015 referendum produces the "nai" result. (Nu-alpha-iota isn't related to "nein", as you might think, but to "naja" in German or "no jo" in Czech, so it means "Yes". "No" is omicron-chi-iota.)

What's written on the referendum ballots is largely meaningless because no creditors' offer exists and the old offer from late June can't be just copied because the situation of Greece has dramatically deteriorated.

But I think that if "nai" wins, the ECB should immediately raise the ceiling and the Eurogroup finance ministers should interpret the result of the referendum in a slightly generalized way and begin to directly control the Greek ministry of finances. After a default, self-reliant creditors should be able to do such things, anyway. Relatively to a June 2015 offer, the spending should be slashed by 10% or so and the magnitude of the pensions and other things should be made dynamical – ready for potential disappointments concerning the revenue.

Banks should be opened. Every depositor could either keep the EUR 60 per day limits; or sign a form and immediately remove these limits but agree with a 20% haircut on his deposits. The Eurogroup should make many other elementary things to increase competitiveness and business-friendliness of the Greek economy. Perhaps sometimes in 2030 when Greece starts to work again and 1/2 of the debt will have been repaid, the Eurogroup should think about some gradual transition of power over the ministry to the Greeks.

As a young Greek, Elli Paspala has already spent some summertime in Prague, drinking cheap wine etc. and with her lover, they felt rich without a dime. They would sleep in cheap hotels and wake up from the sound of bells on Sunday. Perhaps her credit card was already dysfunctional at that time – but they were still happy. I believe that even when Greeks vote "ochi" tomorrow and be without a dime just hours later, they will be as happy as Elli Paspala. It may be the independence from all the serious things such as the Euros that they are actually dreaming about!

It's a nice song but I got a YouTube copyright strike number one for having posted a similar copy of the video above but with better sound. Another reason to say "damn Greeks".

Greece has some chance to keep on living off the German tit. It has defeated Germany in the past, e.g. in 1982 as this video shows. ;-)
Luboš Motl v 4:09 PM
Share