Sir Nicholas Winton died on July 1st at age of 106+ years (respiratory problems). He has been repeatedly nominated for the Peace Nobel Prize but the committee has repeatedly chosen someone else, often someone profoundly unworthy. 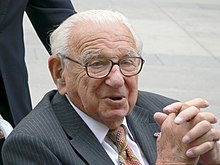 The British press has nicknamed him the "British Schindler", a German guy who saved about 1,200 Jews by employing them in his factory. Winton has saved 669 Czechoslovak children, mostly Jews, by organizing (one big train in) the so-called "Kindertransport".


Winton was born in 1909 (like my maternal grandfather) in London to parents who were German Jewish immigrants. He became a broker in London and supported socialists in the Labour Party. On Christmas 1938, he was determined to go skiing to Switzerland. But he changed his plans and went to Prague instead.


At that moment, Czechoslovakia existed in the form of the Second Republic – the territory was stripped of the Sudetenland that had been annexed by the Third Reich. It was a frustrating period in which rats and similar kinds of scum of the Czech society had a huge advantage. People were getting used to licking the German rectums.

Winton spent his time in a hotel on the Wenceslaus Square where he established an office. It was surprisingly easy for him to create the organization to save the kids – up to 17 years. The transfer to Britain proceeded through the Netherlands which was a minor problem but it was overcome due to the pressure from Britain. He later became a member of the Royal Air Force.

Last October, Czech president Miloš Zeman gave him Czechia's highest award, the Order of the White Lion. Winton had previously met with President Klaus and other politicians and received some other awards. You may imagine that. Despite the nominations, Winton has never received the Peace Nobel Prize – even though it could have been given to assorted obnoxious individuals for the PowerPoint presentation saying that the weather is warm out there and similar breathtaking junk.

Winton was never afraid of telling us inconvenient truths – for example the fact that a very big portion of the Czech society found the German policies during the war (including the treatment of the Jews) totally fine.

If you look at this list of the 669 children saved by Winton, it reads like the participants of a physics or economics conference. A nice joke says: Aside from the world, there also exists an anti-world where everything is anti-. For example, they study antiphysics over there. The research is mostly done by anti-Semites. ;-)

Up to relatively recently – 15 years ago, I don't know exactly – I thought that I wasn't really capable of distinguishing Jews, by their looks or their names, for that matter. I have probably gotten a bit better – often able to see that "this man is similar to this or that famous scientist", and so on. Also, the names on the list include Kohn and Roubíček – most popular surnames in Czech Jewish jokes. Add Gross and Klein, Gruenberg, Singer, Heller, Hertz, Blumenfeld, Kafka, Lustig, Sachs, Weinberger, Politzer, and many others – you know achieved people with these names and chances are that they are Jewish.

During the war, 300,000 Czechoslovak citizens lost their life "unnaturally" – but about 90% of this figure were Jews, an important ethnic group that nearly ceased to exist after the war.

One of the 10,000 children who were saved by the Kindertransport – but before Winton started his own, more difficult Czechoslovak rescue mission – was Walter Kohn, a top physicist and the 1998 Nobel prize winner in chemistry. The Kohn Hall is the building of the Kavli Institute for Theoretical Physics in Santa Barbara.

One may find it surprising that in merely 10,000 "random" children, you find a future Nobel prize winner. In the next century, about 500 people who are children right now will receive a Nobel prize for sciences. That's 500 among 1 billion people or so. The fraction is 1 in 2 million. Even if you have 10,000 children, it's still something like 1 in 200 chance to get a future Nobel prize winner in the program. Did I make a mistake? Clearly, if you pick the Jewish kids only, the probability increases substantially. The lesson is Don't ever be afraid of saving the lives of hundreds of Jewish children.

The Telegraph brings a story of one of the kids saved by Winton (a Labour peer) – who didn't know what Winton had done for him even though they were "friends". What a sign of modesty! I am very modest but if I had saved someone's life, I would probably not resist to boast. ;-)
Luboš Motl v 1:36 PM
Share